Lowering Barriers to High Speed Internet in the Arab World On affordability grounds alone, millions of people in the Middle East and North Africa (MENA) region could be excluded from today’s information revolution. Meeting this challenge has become a top regional priority. Many countries in the Arab world have identified broadband Internet as a critical input to the broader objective of nation building and the transition to a knowledge-based economy. There is growing consensus that broadband Internet is critical in fostering sustainable economic development and job creation, and a key component of strategies for reducing poverty, enhancing job opportunities, and advancing trade integration. Indeed broadband is expected to have a similar impact on the transformation of the economy and of society as a whole as the printing press, steam engines, or electricity had in the past. But for it to have its full impact, people will need access to it.

As a consequence, an increasing number of countries across MENA are adopting national broadband strategies to promote broadband access. Today 11 countries out of 19 in the region have already adopted such policies. The adoption of a national broadband strategy or policy means that a country is making dedicated efforts to stimulate broadband market development in a systematic and holistic way with all key stakeholders. At the core of such a plan are often ambitious national targets for broadband penetration or coverage. For example, the Arab Republic of Egypt’s “eMisr” National Broadband Plan calls for about 22 percent of households subscribed to fixed broadband by 2015 and about 40 percent by 2021.

The price of broadband service will play a critical role in achieving these targets. According to the International Telecommunication Union (ITU), broadband penetration grows rapidly after the level of retail broadband price falls below 3 to 5 percent of average monthly income. In the MENA region, fixed broadband prices constitute roughly 3.6 percent of the average monthly income per capita, while mobile broadband prices stand at about 7.7 percent. While Djibouti, Syria, and the Republic of Yemen are significantly above the 5 percent threshold, a number of countries (i.e., Algeria, Egypt, Jordan, Libya, Morocco, and Tunisia) have just reached the level that makes rapid broadband takeoff possible. 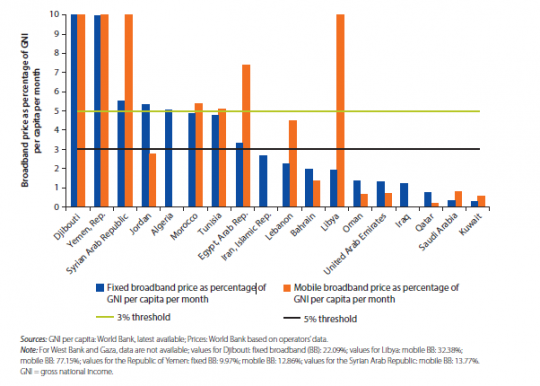 In our new report Broadband Networks in the Middle East and North Africa: Accelerating High –Speed Internet Access to be launched February 6 in Abu Dhabi, we identify  the key factors limiting the development of broadband.   For most countries in the region  it is a  lack of both effective competition and appropriate incentives to deploy and/or fully utilize infrastructure. Addressing these factors would allow the region to leverage two very distinctive assets more effectively. The first is the world class broadband fixed technologies such as Fiber To the Home / The Building or mobile technologies such as 4G/LTE that are currently being rolled out. The second is the extensive terrestrial fiber networks belonging to utilities that could potentially be opened up to  telecoms operators. A strategic framework of reforms could speed up the deployment of cutting edge technology and extend the geographical reach and resilience of national networks connecting countries, regions, and cities. More competition would also guarantee that the new technologies and expanded networks were more affordable. Lower costs would increase access, especially for the region’s large youth population, who are the future engine of the economy and of society. Lowering the barriers of cost will ensure that broadband internet has its full developmental impact. Michel -- I'm looking forward to the launch of the report, and the links between the policy recommendations and development of broadband.
John Garrity

John, thanks for your message. We expect our report to contribute to fostering broadband development initiatives in the MENA region. In this respect I found the findings of a recent diagnostic study for the development of ultra-fast broadband in Tunisia particularly interesting (see: http://blogs.worldbank.org/ic4d/tunisia-innovative-public-private-partne...).

Thanks Michel - Yes I saw that post come out yesterday and found the specificity of the results quite interesting. I am keen to read more about the model developed, and its applicability in other countries/markets. I suppose that will be more clear once that study and model (estimating the optimal technological mix) are publicly released?
And there is much discussion on PPPs of late, if you have done any work articulating the various types of PPPs for infrastructure buildouts (or service delivery), please let me know. Cheers.