Mobile Innovation from the field: We can now talk directly with students, teachers and parents in Uganda 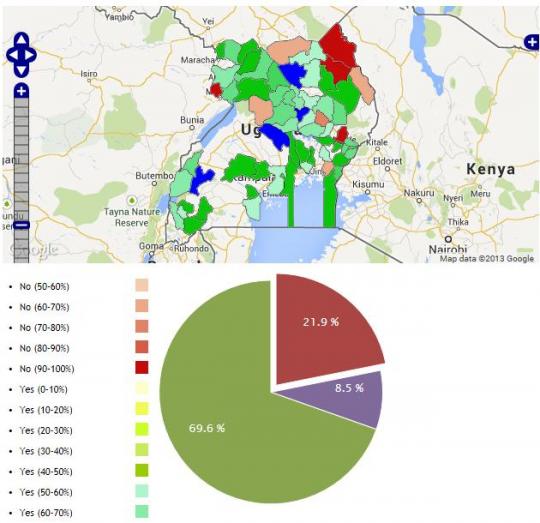 Inspired by the success of using U-report to map and mitigate the spread of Banana Bacterial Wilt disease in Uganda’s banana crops, the World Bank team from the ICT unit (TWICT) decided take U-report’s functionality a step further by establishing an on-going dialogue with students, parents and teachers, who are direct beneficiaries of the Uganda Post Primary Education and Training Project (UPPET) project.

By tapping into Uganda’s network of over 236,000 U-reporters built by UNICEF, a joint ICT/UPPET team was able to identify and poll over 5,000 teachers, students, and parents associated with school supported by UPPET.  Throughout the summer, we have engaged these “special school reporters” in a series of mobile based SMS polls structured around their experiences with the use of the new textbooks and science kits supplied by the project. The responses from beneficiaries are providing useful insights from the field that are expected to improve the ongoing UPPET operation and provide useful inputs to the client in improving the utilization of learning resources in schools.

What makes this initiative phenomenal has been U-report’s capacity to collect targeted beneficiary feedback in a remarkably short time, and with a wide reach. Within two months, thousands of Ugandans had a channel to have their voices heard on a program that directly affected them. Furthermore, having identified beneficiaries who are willing to report, present a great opportunity to continue engaging this network of parents, teachers and students in discussions that could help the World Bank and the Ugandan Government distill lessons learned for current and future education programs. This initiative is a prime example of how U-report is being strategically incorporated into World Bank operations to institute data-driven decision making, increase accountability in public service delivery and improve citizen engagement.

This most recent user case of U-report in Uganda provides four key lessons which could be further extended into World Bank operations:

The World Bank’s commitment to boosting shared prosperity and ending extreme poverty comes with the commitment to constantly measure and evaluate the effectiveness of our operations. Such a data-driven delivery model requires us, among other things, to analyze targeted beneficiary feedback in real time so that we are in a position to be constantly fine tuning our operational strategy. The role of ICTs to achieve this can be huge, and our story on leveraging Ureport for education sector in Uganda is a testament to this. Through cross sector collaboration and firm commitment of support by country management units like Uganda’s, the team was able to push the boundaries on making service delivery more effective through the use of technology.
Topics
Education
Digital Development
Countries
Uganda