For Mindanao in the Philippines, no other path but peace 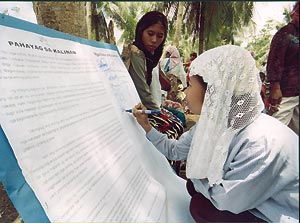 "After four decades, peace is within reach. Let's grasp it with both hands and never let go," said Malaysian Prime Minister Datuk Seri Najib Tun Razak, during the signing of the Framework Agreement between the Philippine government and the Moro Islamic Liberation Front on October 15, 2012.

Weeks after that historic event, these words from the Malaysian Prime Minister continue to reverberate in my mind. For I grew up in Mindanao, right at Ground Zero of this decades-old tragic drama that has claimed tens of thousands of lives.

I think there's really no other path out there but peace, especially if Mindanao, or more crucially the areas within the Autonomous Region in Muslim Mindanao (ARMM) and the adjacent provinces, were to achieve real progress. The latest statistics (2009) says 38.1 percent (or about 4 out of 10 families) are considered poor in this region, as against the national figure of 20.9 percent (about two to ten). There’s no way for people to climb out of poverty when armed clashes—be it between government troops and rebel forces or between warring clans and factions—are forcing families to abandon their homes and farms (pdf) and destroying bridges, hospitals, schools, health centers, and shops.

Mindanao has what it takes to flourish economically. All it needs is a break. It has thriving growth centers like Davao, Cagayan de Oro, Iligan, General Santos, and Zamboanga which boast of world-class agribusiness firms. It has fertile lands, good fishing grounds, a climate not susceptible to typhoons, rich in minerals and a good cadre of hardy entrepreneurs.

I went home recently and learned just how plantations of bananas, pineapples, oil palms, rubber trees, coconuts, and vegetables are spreading to remote areas of Maguindanao, Sultan Kudarat, North Cotabato, Lanao del Sur and South Cotabato, creating jobs for many. And mind you, these are not multinationals but small holders. Put in the element of peace, security and certainty and these entrepreneurial drives will spread like wildfire throughout the island, creating more opportunities for people to improve their lives.

You build a strong momentum for peace and it would be less daunting to bring the lagging areas of Mindanao, specifically ARMM, into the mainstream of growth and prosperity. You silence the guns, and address the Moro people's historical grievances (for instance, their marginalization following the influx of settlers and migrants from Luzon and the Visayas islands since Spanish times and the divide-and-rule policies of the various colonizers) and the country’s energies could be focused more on building schools, health centers, roads, bridges, and sources of safe drinking water—basic things that are sorely lacking in conflict-affected areas. Easier said than done but the Framework Agreement is one huge step in the right direction, I think.

(According to Dr. Jamail A. Kamlian, history professor at Mindanao State University-Iligan Institute of Technology, the term "Moro people" refers to the 13 Islamized ethnolinguistic groups of Mindanao, Sulu and Palawan. They are an indigenous population that had been living on the islands long before the period of Spanish colonialism.)

A lot of things still need to be done (improving governance, for instance) to transform the spirit of the agreement into tangible gains on the ground. Nevertheless, it's clear that both parties, with the support of the global community, are committed to finding that sweet spot that could usher in lasting peace.

In the late 70s, I remember some neighbors going off to the battlefronts as young soldiers—kids really—drafted by the Marcos dictatorship to contain "secessionists." Many of them came home in caskets. Those who survived in one piece were completely changed. Drunk all the time, some of them would walk around town firing their rifles into the air, scaring the wits out of us. (It was Martial Law; military men were kings.)

My dream is that young boys and girls in Mindanao who feel they need to leave their villages, will do so—not to fight in wars but to sharpen their minds in schools and places of higher learning. I see them returning as gentler persons, armed with skills, knowledge and deeper commitment to work with their peoples in building their communities and the nation. It would be interesting to see how the lessons reported in World Bank's 2011 World Development Report on Conflict, Security and Development will apply in Mindanao over the coming years...

Thank you for writing this, indeed the "promised land" in Mindanao need to show fulfillment, and it can only happen if there is lasting peace. Sharings like yours help bring it to people's consciousness. All the best.