How We Measure Poverty in Vietnam

What does it mean to be poor in Vietnam? When I grew up in Hanoi in the late 80s, poverty was all around. Most of the population then was living under the international poverty line ($1.25 per day). Because there were no living standard surveys to measure poverty, there was no clear indication of what it meant to be poor. A rich person at that time was someone with either a motorbike or a television set, while a poor one was a street beggar or someone who did not have enough rice to eat.  In the earliest survey conducted in 1992 and 1993, about 64% of the population was poor by the international poverty line. Twenty years later, less than 3% were considered poor by the same standard while hunger was successfully eradicated.

In Vietnam, there are two main approaches to measuring poverty. The first approach is used by the Ministry of Labor, Invalids, and Social Affairs (MOLISA) to generate a classification used for determining those who are eligible for the national anti-poverty program as well as monitoring poverty over the short term. A separate approach has been used by the General Statistics Office and the World Bank (GSO-WB), principally to examine poverty changes over the long run. The use of separate approaches to monitor poverty changes and to target government programs is a common practice worldwide. 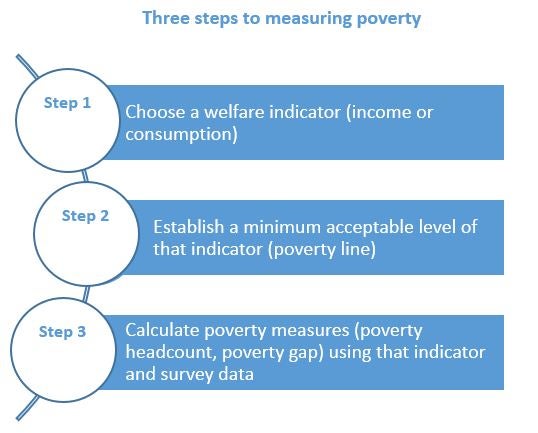 The two approaches differ in several aspects. First, MOLISA uses income as a welfare indicator while the GSO-WB uses consumption. In the second step, both approaches use the “cost of basic needs” approach to determine the poverty line. This starts with minimum calorie requirements deemed sufficient for good health. Third, while poverty measures using the GSO-WB poverty lines are constructed using household survey data, the MOLISA poverty measures are based on a National Census on Poverty administered every five years. In the years when there is not a census, MOLISA updates the poverty lists through village-level consultations, i.e. meetings in which the village would vote on who is poor and who is not.

The figure below shows the trends over time using the most commonly cited poverty methods. By all measures, we observe a rapid poverty reduction in Vietnam. 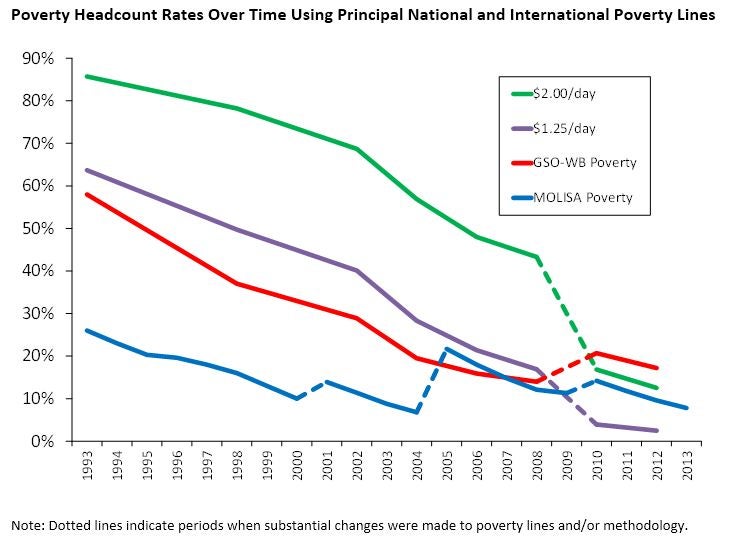 Looking ahead
Poverty measurement in Vietnam has faced the happy challenge brought by rapid poverty reduction over a twenty-year period. The continual decline of poverty over time has required revisions of the choice of relevant measures. Looking ahead, by some rough projections, poverty as measured using the $1.25-a-day rate, which is already negligible in the country, will move towards zero. Likewise, the $2-a-day poverty measure will likely become largely irrelevant for Vietnam soon. Under this projection scenario, overall poverty using the GSO-WB line will drop to 8 percent by 2020.

For the purpose of poverty monitoring, the GSO-WB can be used for many years. At some point, however, it is likely that poverty by this measure will reach such low levels that it will be necessary to once again revise the approach to reflect Vietnam’s rising prosperity and the larger aspirations of the Vietnamese people.

Related: Video: What will it take to end poverty in Vietnam?
Topics
Poverty
Countries
Vietnam
Regions
East Asia and Pacific