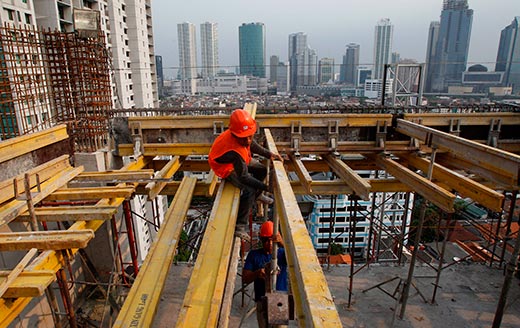 Can Indonesia’s economy move from a situation of investment in flux to an investment influx? This is one of the questions posed by the World Bank’s March 2014 edition of the Indonesia Economic Quarterly.

Why is Indonesia’s investment growth in flux? First, there has been a slowdown in fixed investment, due to lower terms of trade and tighter external financing conditions. This has helped narrow Indonesia’s external imbalances.

Third, Indonesia remains reliant on external financing from portfolio investment inflows. These have surged in recent months, but they can be volatile.

Finally, recent policy developments have increased regulatory uncertainties. Add to that the usual difficulty of predicting policy ahead of elections, which may impact on investment of all kinds.

Given uncertain prospects for global investment flows to major emerging market economies like Indonesia, the good news is that Indonesia’s external balances are adjusting. The current account deficit shrank significantly in the fourth quarter of 2013, to $4.0 billion, or 2% of GDP. This is a welcome reduction from the record high of $10.0 billion in the second quarter of 2013—that’s 4.4% of GDP. The stock market rallied, gaining 9% in local currency terms, bond yields fell, and the Rupiah climbed back by 7% against the USD, year-to-date, recouping some of last year’s significant losses. Banking and portfolio inflows also rose in the final quarter of 2013*.

But some caution is warranted. The adjustment has been narrowly based on tighter monetary policy and currency depreciation over the second half of 2013, and slower investment growth. Indonesia remains vulnerable to a renewed deterioration of global market conditions.

Why? The drivers of the current account deficit reduction: a pick-up in export volumes, weaker imports, and a stabilization of the relative prices of imports and exports—may prove temporary. Commodity demand and prices could slip again, reducing exports—this is not our base case, but witness renewed concerns about China’s growth prospects and the potential of US recovery. Second, export volumes in Q4 2013 were partly due to a surge in mineral exports, as producers accelerated shipments ahead of the January export ban. There are indications that mineral exports have since fallen sharply. All in all, the current account deficit will narrow in 2014, but only moderately, to 2.9% of GDP compared with 3.3% for 2013.

A renewed deterioration in external financing conditions is the most obvious risk to growth. But there are others. The investment slowdown could intensify with tighter credit, more expensive imports, and regulatory uncertainties, notably if building investment—which accounts for over 80% of investment spending and has remained resilient—were to cool. Similarly, private consumption growth has remained robust, but may weaken due to tighter credit, and the continued, negative impulse into incomes from weaker terms of trade may continue through mid-2014*. A steeper slowdown certainly cannot be ruled out, although elections may spur more spending and prompt higher growth.

What, then, are the policy options that may enhance Indonesia’s growth outlook?

Third, credible progress is needed on addressing other structural impediments to stronger and more inclusive growth, namely infrastructure and worker skills gaps, and constraints on the efficient working of labor, land, capital and product markets. This edition of the Indonesia Economic Quarterly includes a taster of the forthcoming World Bank report on the long-term agenda, or the Indonesia Development Policy Review, entitled “Indonesia: Avoiding the Trap”.

Indonesia’s policy environment is naturally influenced by the legislative elections in April and the presidential election in July. However, in light of ongoing economic risks and Indonesia’s ambitious development agenda, laying the groundwork for future reforms, minimizing policy uncertainty, and making continued reform progress in some areas, should remain a priority. If so, perhaps investment flows and spending activity in Indonesia can go from being in flux, to experiencing a sustained influx…

*This date has been corrected after publication of this post.