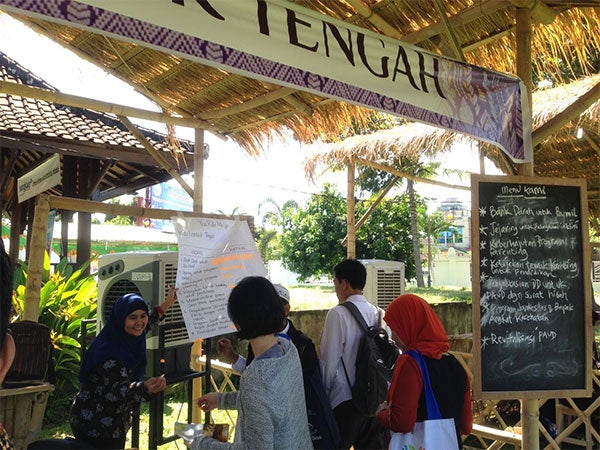 One recent scorching afternoon, a display of colorful squat toilets welcomed curious visitors in the main park of the city of Mataram, in Indonesia’s West Nusa Tenggara province.

These visitors were not looking to buy new toilet bowls, nor were they working on home improvement projects. They were among 350 villagers who went ‘shopping’ for ideas and innovations to improve basic services and infrastructure in their home villages.

The 2017 Village Innovation Festival was organized by the provincial government of West Nusa Tenggara, in collaboration with the Ministry of Village's Generasi Cerdas dan Sehat Program.The festival highlighted innovative solutions to address some of the most pressing development challenges faced by village communities.

At the heart of the festival was the implementation of the Village Law (Law No. 6 of 2014 on Villages), which governs the disbursement of village funds in more than 74,000 villages. The law increases the authority and responsibility of the communities on how to spend their village funds. Many believe the village law has the potential to address rural inequality in Indonesia.

Visitors exchanged ideas and know-how on ways to use village funds more effectively to meet their needs, particularly in improving basic social services, and in addressing poverty and inequality.

As I went stall hopping, I was impressed by the creative ideas and the villagers’ dedication to overcome the various constraints they face for public services.

Cutting edge technology may not be the festival’s buzzword but the gathering was not short on solutions that were simple, creative, and applicable to their needs.

I met health worker Sri Santiani, who set up the Maternity Savings Fund (Tabulin), after witnessing how many mothers and expecting mothers experienced the burden paying for the cost of maternity and child care services.

Sri got the idea of a savings program after seeing that many mothers do not have government health insurance, or that they do could not afford to pay insurance premiums. Tabulin helps mothers save up for maternity services. Women can also tap into the savings program for other needs.

The crowd’s favorite was the ‘Contract Midwife’ initiative.  The idea was coined by Nonong Muhaemin, a health worker whose village had struggled with high incidences of maternal deaths due to lack of health facilities.  The nearest community health center from his Tokolok village is about 25 kilometers (15.5 miles) away through difficult terrain.

After Nonong’s village revived the health post service (posyandu) and recruited a midwife exclusively for their village, there were no more cases of maternal deaths during childbirth, and the number of high-risk pregnancies and severely underweight babies/toddlers have also significantly decreased.

Initially the midwife’s salary was paid through the Generasi program, but after seeing the benefits, they now use their own village fund.

Meanwhile, in Mekarsari Village in Suela District, Lombok Timur Regency, an elementary school principal, Sabirin, came up with the idea of a ‘school without walls’.

His village did not have a junior high school. With the nearest being 10 kilometers (6 miles) away, many families could not afford the transportation cost to send their kids to school. Without the prospect of secondary education, many children got married after graduating from elementary school, but got divorced soon afterwards – financial and job insecurity being the main reasons.

Sabirin asked the children if they would continue their education if there was a junior high school in the village and he was met with enthusiasm. Subsequently, SMPN Satu Atap (One Roof Junior High School) opened in 2012, a simple thatched-roof hut built through a collective donation from the community, and with support from Generasi.

Providing free tuition to all students, the new school’s impact on the incidence of child marriage is significant. In 2016, no children has gotten married after graduating from elementary school, compared to 10-12 child marriages in previous years. The school is currently still funded by local community.

Back to the toilet bowl stalls. For the record, it was not there to offer new technology on toilets, rather an invitation for financial institutions to fund credit schemes to own toilet bowls in Indonesia, where about 32% of the total population still practice open defecation.