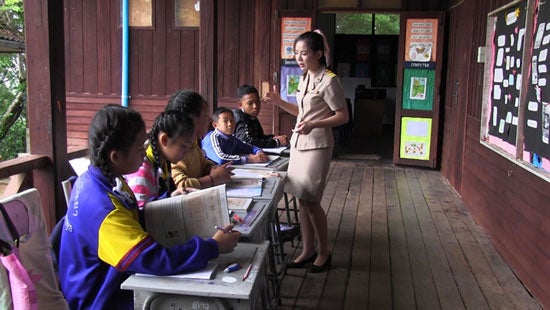 Despite Thailand’s success in expanding educational access, new empirical evidence suggests that much more needs to be done to maximize the potential of its students. The 2012 PISA reading assessment reveals that almost one-third of Thai 15 year-old students were “functionally illiterate,” lacking critical skills needed for employment tasks that require reading skills beyond a basic level. Furthermore, the performance gap among schools has been widening in recent years. Unsurprisingly, the disadvantaged and poorer-performing students are concentrated in small rural village schools.

Compared to international peers, Thai secondary schools are severely hindered by inadequate learning materials and physical infrastructure, which limits their capacity to provide quality instruction. More importantly, the Thai secondary school system is dramatically lacking in qualified teachers: secondary schools in rural areas are much more understaffed and under-resourced than their urban counterparts. This resource allocation inequality is substantially worse than that observed in OECD countries.

A World Bank study finds that teacher shortage is a far more acute problem among Thai primary schools, the majority of which are small. The study estimates that around 64% of Thai primary schools are critically short of teachers – defined as having less than one teacher per classroom on average. As a result, teachers in these schools have to cover many more subjects and/or grade levels than their counterparts in larger schools. The problem is compounded by the fact that these small rural schools are allocated teachers with lower qualifications and teaching experience.

Key results from the empirical study reveal that eliminating teacher shortages, both in terms of quality and quantity, would result in significant improvement in student learning and the impact would be greatest for lower-performing schools. Therefore, improving the quality of teachers and addressing the severe teacher shortages - especially for the vast number of small rural schools - should be at the center of Thailand’s reform initiatives if the country is serious about tackling the widespread low education quality and high disparity in educational performance between socioeconomic groups.

The study estimates that as many as 110,725 out of 353,198 classrooms in Thai primary and secondary schools are critically short of teachers. Given the severity of the problem, a massive outlay would be required to staff all classrooms in the country adequately. In fact, under the current situation where there are more than 31,000 schools nationwide, Thailand would need to recruit, train, and deploy 108,000 new teachers – an increase of nearly 27% of the teaching force.

A more viable option is for Thailand to utilize existing resources more effectively by reorganizing its oversized school network which no longer fits the current and projected student population. A school mapping exercise shows that around 85% of small schools (with 20 students or less per grade on average) are located within 20-minute travel time to each other or to larger schools. With careful planning and support, these schools could be reorganized into fewer but larger schools without impairing educational access.

One option is to strategically invest in “receiving” or “hub” schools to turn them into attractive options for students and parents in nearby small and under-resourced schools. With adequate provision of transportation and pedagogical support for students wanting to relocate, the small and under-resourced schools will fade out gradually over time. It is estimated that if the program proceeds according to plan, Thailand will end up with a total of 15,854 schools nationwide. This total includes the 3,259 small schools which are isolated. These schools cannot be networked or merged with other schools due to their remote locations. Furthermore, these “protected schools” should not be closed down since access would be adversely affected. Instead, they must be endowed with additional resources so that they can provide good quality education to disadvantaged students. It is estimated that the proposed reform will result in all classrooms in Thailand being adequately staffed, importantly, without needing to hire an extra teacher.

We can no longer afford to ignore the problems of small schools. Nearly one million, mostly poor children are attending these schools and they are not getting the same opportunities as their peers in larger schools. And the demographic trends show that this problem will only get worse: student numbers will fall by another 2 million in the coming 15 years.

Tackling a problem of this magnitude and complexity will require leadership, very careful planning, additional resources, a long-term commitment, and a collaborative approach to ensure that parents, teachers and school leaders’ voices are heard.

A detailed plan would have to be worked out to answer all the concerns of communities and education staff. For instance, how will children be transported to the new school? What will happen to the old school building? What will happen to teachers affected by the closure? Will additional pedagogical support be provided at the new school to help my child catch up? And so forth?

This will not be easy. But if we do not address this problem, we will continue to leave nearly 1 million of our poorest children behind. A very good and analytical article. one, adequate teachers must be there. second, qualified teachers be posted. Third, remotely located schools nned not be merged as they serve the deprived areas and population. Fourth, a national and standard syllabus be developed and implemented. Fifth, standard education be spread.Sixth, those not god at education or drop outs, skill-based polytechnic be developed. Seventh, if possible,a few experienced teachers may be taken from India. Eight, a few standard NGOs be involved for spreading education. Last but not the least, gender aspects must be respected.