What do Vietnam and Cristiano Ronaldo have in common?

For many years, Cristiano Ronaldo was known for his extraordinary technical and physical abilities. When playing for Manchester United, the well-known professional soccer player was able to run throughout the entire field, dribbling past several players and scoring. Now, aged 35, he can still score three goals in a decisive game because he learned to be in the right place at the right time. Ronaldo has remained one of the world’s top soccer players by adapting to his ability and adjusting to the match he plays.

In the world of economic development, Vietnam is also considered as a star. Not only has the country remained the second fastest growing economy for the past decade, but it has also managed to almost eradicate extreme poverty from 53% in 1992 to less than 2% in 2018. Such remarkable performance was achieved mainly because the economy was running fast, just like the young Ronaldo at the peak of his physical strength. The country’s population was young and dynamic, eager to learn and work; and production was pushed by the tailwinds of globalization and structural transformation. 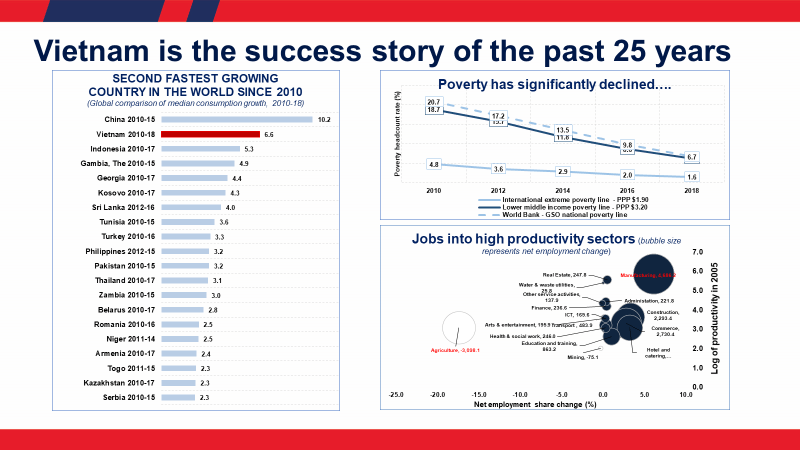 Today, like Ronaldo at 35, Vietnam’s economy may find it harder to run faster. Many of its traditional drivers of growth have started to slow down and are expected to decline further in the future. The so-called demographic dividend is fading as aging population is looming in the horizon. The export drive might be more difficult to sustain in a world that has been increasingly closing its doors – as reflected by lower global trade and capital movements. The automation of industrial processes may lead to the reshoring of activities that were attracted to Vietnam’s cheap labor. By running so fast, Vietnam has become more vulnerable to environmental risks and seen some of its most beautiful assets deteriorating, such as the Mekong delta and its forests. Cities in Vietnam are also becoming heavily polluted.

For all these reasons, our latest report titled Vibrant Vietnam urges Vietnam to put efficiency at the front and center of its development strategy. The country should learn not only to grow fast, but also better. This will require smart management of the country’s wealth by making firms more dynamic, infrastructure more efficient, workers more skilled, and the environment more resilient to human activities and climate change.

Putting efficiency front and center is easier said than done, as it requires a change in mindset.

First, Vietnam should focus less on increasing production outputs but more on the optimal allocation of financial and human resources to the most dynamic firms.  The authorities should reduce the barriers of entry to new investors – which are still high in some sectors – especially those who are ready to bring knowledge and new technologies. They should also – and this is often forgotten – allow the least performing businesses to exit by modernizing the existing insolvency framework (as it is ranked only 133rd out of 190 economies according to the 2020 Doing Business report).

Second, the government should shift from encouraging access to basic infrastructure services to incentivizing responsible behaviors. As most Vietnamese have now access to these services, the pricing strategy should be to adjust tariffs with supply costs to increase efficiency as well as to reduce waste and pollution.  Of course, such a policy should be implemented in a smart and gradual way to protect vulnerable groups and to manage interest groups’ resistance. This policy switch would generate substantial public savings that could be directed to other priorities, including post-secondary education, an area where Vietnam needs to catch up its competitors.

A few years ago, Cristiano Ronaldo reminded the world of sports that “I want to consistently play well and win titles. I’m only at the beginning,” and the soccer star managed to achieve his goal by adjusting his approach to the game. Vietnam’s ambition is becoming a high-income economy by 2045, and if the country starts adapting its development strategy toward higher efficiency, it will continue to play well and win more titles in the world of economic development.

Also published on the Future Development blog of the Brookings Institution.