Will a rising tide lift all boats?

“...In the past, a total income of RM800–RM1,000 could support six people or more. Nowadays, you can barely support three people, and even that is a nightmare... Malaysia has developed, but the rakyat [people] has been left behind because incomes have not increased.”

These are the popular opinions and beliefs among Malaysians who participated in our 2019 joint World Bank-University of Malaya qualitative study on living standards in Malaysia. The Kuala Lumpur skyline is emblematic of a modern, rich city, but closer to the ground, a conversation with the Grab car driver tells a different story of how most Malaysians struggle in their daily lives.

Even before the pandemic, there was a growing sense among the rakyat that the headline successes of Malaysia’s economy were not translating into real improvements in their daily lives. A previous study done by the World Bank on Malaysia’s cost of living challenges showed that many households need dual incomes and some even multiple jobs to make ends meet, suggesting that most people were not better off despite rapid economic growth in past decades.

Our latest report, Aiming High: Navigating the Next Stage of Malaysia’s Development, argues that while Malaysia is expected to reach the important milestone of becoming a high-income economy within the next 3–7 years, the bigger challenge is for the country to ensure that as the nation prospers, so do its citizens.

Over the past 30 years, only 33 countries have made the transition to high-income status, and in many ways, Malaysia is approaching the transition from a weaker position than its predecessors. Compared to those countries, Malaysia is approaching the high-income transition with higher inequality, limited social spending, and shrinking fiscal space. A high-income country status that is not matched by elevated economic security and greater overall well-being for all Malaysians would be an achievement only on paper, and certainly not a meaningful one. 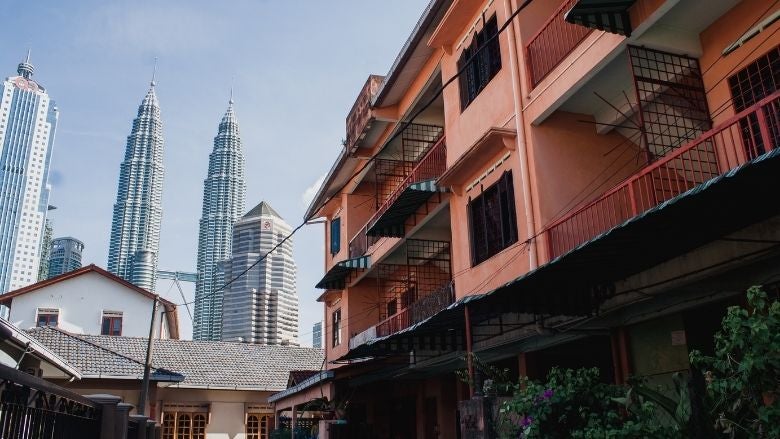 One must then ask, what is the driving force behind these less optimistic sentiments? It is worth noting that while the country has achieved great progress in poverty reduction and economic inclusion since 1970, growth has become less inclusive in recent years. There are many factors contributing to the perception that growth has not benefited all citizens equitably, including slower income growth especially among younger and lower-skilled workers, inequitable access to quality education, and inadequate social safety nets, particularly for the poor and vulnerable. At about 0.7 percent of GDP, Malaysia’s spending on social safety nets is much lower than almost all countries that have graduated to high-income status since 2000, which generally spend about 1.5–3.4 percent of GDP.

Of course, while the most straightforward and obvious solution would be for the government to increase its social spending, in reality, this is much easier said than done. The government’s large commitments to operating expenditures such as salaries, pensions, and debt service payments constrain its ability to allocate more for social spending as well as spending on development. As such, this severely limits the potential role of fiscal policy as a redistributive tool to promote shared prosperity and greater equality among all Malaysians.

But it is not just about spending more. It is also about spending smarter. For social spending to be effective, it has to be targeted to the right groups and at a meaningful amount. In Malaysia,  nearly everyone in the bottom 20 percent (B20) income group receives some form of social assistance, but they enjoy only 29.5 percent of the total program benefits. In contrast, a large share of social transfers ends up in the M40 (37.2 percent) and the T20 (9.5 percent) households. Moreover, certain types of social spending, such as the blanket fuel subsidy, also disproportionately benefit higher-income households. A study done by Bank Negara Malaysia (BNM) back in 2014 estimated that the B20 households only receive 4 percent of the fuel subsidy, while the T20 receive 42 percent. In other words, for every Ringgit that the government spends on fuel subsidies, only 4 cents goes to the lower income households, thus increasing inequalities rather than reducing them.

More generally, Malaysia’s spending in social sectors has been shown to be inefficient, including expenditure on critical areas such as education. Malaysia spends a large share of the national budget on education, yet learning outcomes have consistently fallen below expectations.

For there to be money to spend, the government needs to ramp up its revenue collection. Since 2012, Malaysia’s revenue collection as a percentage of GDP has been on a persistent decline, and this has squeezed the government’s ability to provide the high-quality public services and social safety nets that the expanding middle-class increasingly expects. In 2019, Malaysia’s revenue collection stood at 17.4 percent of GDP, well below the average figure for upper-middle-income countries (28 percent) and high-income countries (36 percent). The government severely under-collects in key revenue areas such as personal income and consumption taxes, in part from an expansive system of tax deductions and exemptions across all income levels. Not only that, with the exception of the real property gains tax, Malaysia does very little to tax capital gains and there is no wealth tax in place. Globally, there has been a greater call in recent times, especially since the COVID-19 pandemic, for governments to include wealth taxes as part of their revenue frameworks.

It is clear that the tax framework in Malaysia can and should be made more progressive. Beyond the mechanics of the framework itself, efforts to raise public awareness and to inform the rakyat about taxes and the corresponding benefits of government spending should be instituted. Responding to the 2020 World Values Survey on whether it is an “essential characteristic of a democracy that governments tax the rich and subsidize the poor”, unlike in many other countries, most Malaysians had an indifferent view. Concurrently, Malaysia needs serious efforts to improve its accountability and transparency to raise the rakyat’s confidence in the tax and spending framework.

This principle of an enhanced social contract is synthesized in our report. The state acts to meet the needs of the population credibly and effectively, and in exchange, the rakyat must be empowered to exercise their rights and duties as citizens of the country. It is time for Malaysia to aim high and ensure that the rising tide lifts all boats.