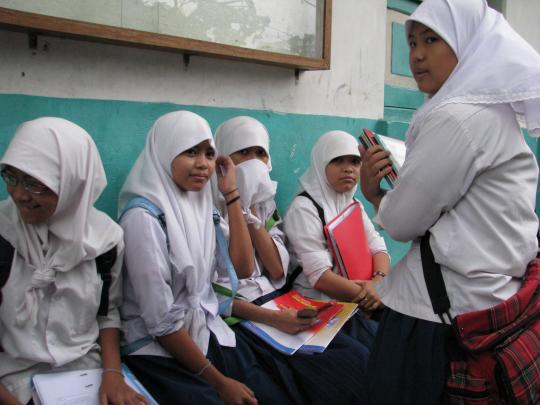 Recently, the Indonesian Minister of Education and Culture announced the start of a program to extend the length of compulsory education from 9 to 12 years. Behind this announcement lies a desire to maximize the benefits of the country’s demographic dividend.

Unlike many other countries in the region, Indonesia is still young with one-third of its population under the age of 14. These children represent a great opportunity. As they move into the labor market they have the potential to raise national income per-capita before the population begins to age and levels of dependency grow. In order to reap the benefits of this demographic dividend, Indonesia must provide what the Minister has called the ‘golden generation’ with better educational opportunities including access to senior secondary school.

What is the scale of the challenge? Making education compulsory doesn’t really mean anything unless there are schools for students to attend and children can afford to go. We estimate that an additional 6.4 million school places would need to be provided, most at the senior secondary level, to accommodate all 7 to 18-year-olds. If the government commits to providing half of these places (existing provision is evenly split between public and private schools), rough calculations suggest that the basic infrastructure costs (teachers, classrooms and other educational inputs) would be around 60 trillion rupiah (USD 6 billion).

However, putting the infrastructure in place won’t be enough. Most of the children who leave school before the end of secondary level come from the poorest households. These families get by on an annual income of around Rp. 10 million (USD 1,000) and will struggle to cover the average annual costs of senior secondary schooling of Rp. 2 million (USD 200). The Ministry plans to expand current schemes to assist these poor students; we estimate this support will add another 8 trillion rupiah (USD 0.8 billion) to the bill. Overall, the costs of extending compulsory education from 9 to 12 years would represent about one-fifth of current government education spending.

Can Indonesia afford this? A constitutional obligation already reserves 20% of the government budget for education, and it is unlikely that the Ministry of Finance will provide much more. There are also many other claims on the education budget.
A teacher certification program that doubles the pay of teachers has already put significant pressure on the budget, which will only build as the goal of certifying all teachers is reached. The quality of basic education remains low, and there is a need to continue to invest in improving student learning at this level too. So, how can Indonesia finance all these commitments and avoid falling off what some local education experts describe as the Ministry’s own ‘fiscal cliff’?

Tackling some of the big inefficiencies in current education spending will be necessary to afford such a large expansion. A lot of the existing school infrastructure is not used efficiently. For example, one-fifth of primary schools in Indonesia have only 90 students. In schools like this, teachers teach classes with an average of only 10 students. Some say that these low school utilization rates are just a function of low population densities in remote places (think here of cut-off villages in the Papuan highlands) but many of these underutilized schools are in densely populated areas. For example, 39% of primary schools in East Java, one of Indonesia’s most densely populated provinces, have fewer than 120 students.

Low school utilization also results in low teacher utilization. Indonesia has some of the lowest student teacher ratios in the world and well below levels associated with good quality education. In our latest public expenditure review (World Bank 2013) we calculated that raising student teacher ratios to international averages could realize savings equivalent to about 10% of the education budget. This doesn’t mean that schools need to be closed and teachers fired. Far from it. The teachers and schools in basic education provide a base for senior secondary expansion. With a program of teacher retraining and a well-planned program of school conversion and rebuilding the goal of 12 years compulsory education could be made more affordable.

Efforts to increase educational attainment are urgently needed to satisfy the growing demand for skills in the labor force and to drive Indonesia’s future growth. Finding the resources to fund these improvements while at the same time putting in the vital investments to improve the quality of the entire education sys-tem is challenging. But finding these resources will be key if the Minister’s vision of an education system carrying youth into a golden age is to be realized.