Can changing your mind change the world?

This blogpost is based on a lecture by Dr. Richard Davidson, who spoke at the World Bank’s Science of Learning Expert Series in January 2019, and a recent visit of a World Bank team to the Center for Healthy Minds in July 2019.

Imagine someone told you that there is a set of skills that could improve your ability to learn, make you happier, improve your health, and help you live a longer life. Even better, that you were born with the potential to develop these skills, and that you can cultivate these skills with minimal effort (maybe even by playing a video game?), no matter your age. Does this sound too good to be true? Not according to Dr. Richard Davidson, Founder and Director of the Center for Healthy Minds and Healthy Minds Innovations.

Dr. Davidson and his team are on a mission to cultivate well-being and relieve suffering through a scientific understanding of the mind. They have identified four constituents of well-being – awareness, connection, insight, and purpose – that are rooted in mounting evidence from neuroscience and other fields. To learn more about well-being or its constituents from Dr Davidson himself, click on the following links: well-being, awareness, connection, insight, purpose. 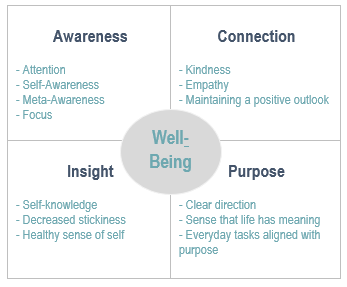 Consider this: the typical American adult spends, on average, 47 percent of their waking life not paying attention (i.e., exhibiting a lack of awareness). These distractions have been shown to take a toll on one's happiness. Psychological well-being is also linked to physical health, which indicates that improving well-being in the general population has the potential to decrease the use of healthcare and prescription drugs, reducing healthcare costs for society at large. There is even evidence to suggest that having a sense of purpose in life increases the likelihood that you will live longer.

The good news is that we are born with the potential to develop the skills that contribute to well-being. For instance, evidence indicates that all of us are born with innate kindness, and that humans, from a very early age, have a bias and propensity towards warmhearted interactions compared to those that are unkind. This hypothesis was tested by showing 6-month-old babies two animations: in the first animation, a character helps another character to climb a mountain. In the second animation, a character pushes another character down as it attempts to climb the same mountain. Based on their facial expressions and infrared eye tracking, researchers inferred that the babies favored the first animation, as they stared at it for much longer.Further, neuroplasticity, or the brain’s malleable nature, makes it possible to nurture the skills that are there from the start. For example, cognitive therapy and certain forms of meditation have been shown to improve brain function.

These features of innateness and malleability have led Davidson to conceptualize well-being in the same way scientists conceptualize language: although we are born with the capacity to understand and produce language, these skills need to be learned, practiced, and strengthened throughout life. Similarly, while we are born with the ability to be aware, connect with others, have insight into ourselves, and live with purpose, these skills must be nurtured.

How can well-being be nurtured?
Let’s start with what many may see as an unconventional route: a video game. In ‘Crystals of Kaydor,’ children speak to aliens and learn to identify whether the aliens are angry, fearful, happy, sad, surprised, or scared. The game was designed to not only help children learn how to identify emotions, but to provide a fun way for kids to practice and learn empathy. Preliminary results indicate the game helped change underlying brain networks associated with perspective-taking and empathy. This has the potential to reach millions of youth, who spend, on average, 70 minutes per day playing video games.

For those less-inclined towards video games, there are also examples of how well-being can be cultivated in the classroom. For instance, a mindfulness-based Kindness Curriculum includes stories and practices that help students pay attention, regulate their emotions, and cultivate kindness. This curriculum was piloted across six public preschools over a 12-week period; those children who were given the curriculum experienced improved ability to focus, earned higher grades, and exhibited improvements in altruistic behavior, as evidenced by their willingness to share. Other interventions, like compassion circles, encourage children to connect with one another based on what they have in common, removing a sense of otherness. In a study featuring older youth, this was shown to improve their ability to understand their peers’ suffering.

There is also evidence that mindfulness interventions can improve the effectiveness of teachers by reducing stress and burnout, subsequently putting them in a better place to cultivate children’s wellbeing. Mindfulness interventions can also help counteract teachers’ implicit biases toward students of color, which often results in Black, Latino, and American Indian students being disciplined more often than their white peers. Teachers who received this intervention experienced significant reductions in implicit race bias towards children that were sustained at the 6-month follow-up. This is compared to a multitude of existing implicit bias trainings that don’t include mindfulness training, and have produced weaker effects.

How is the World Bank cultivating well-being within education systems?
The World Bank Group’s Human Capital Project is a global effort to accelerate more and better investments in people for greater equity and economic growth. Within the Education Global Practice, we’ve identified strategic priorities to help tackle the learning crisis and realize the promise of learning for children, adolescents, and adults. The cultivation of well-being within the education system is an important part of this effort. Here are a few examples of how the World Bank has been incorporating a focus on well-being into our ongoing work in education.

To begin with, the World Bank recognizes the importance of measuring whether and how these skills are currently being nurtured in classrooms around the world. The World Bank’s Teach tool explicitly measures the extent to which teachers nurture socioemotional skills in their students. Specifically, related to Davidson’s well-being framework, the tool measures (and thus highlights the importance of) the extent to which teachers promote perseverance, which relates to “insight.” Teachers receive higher scores if they have a positive attitude towards failure and if they focus on students’ efforts rather than their seemingly innate abilities. The tool also measures the extent to which the teacher nurtures skills that that fall under “connection,” including empathizing and perspective-taking.

Where there is room for improvement, the World Bank is supporting projects aimed at improving well-being in the classroom. On the horizon, the World Bank is collaborating with the Argentine government to design, implement, and rigorously evaluate an intervention that aims to prevent school dropout in vulnerable areas. The 12-session, group-based intervention is designed to develop the skills and strategies to cope with anxiety and depression through cognitive-behavioral therapy (CBT). The CBT sessions will be facilitated by teachers in the classroom, and will incorporate elements of mindfulness, such as deep breathing and practicing self-control, to help counteract the stressors that often lead to dropout.

Also important is measuring the extent to which these interventions are working, and so the World Bank is trying to improve the way it measures skills related to well-being. For instance, the Bank is considering developing robust, cross-cultural instruments to measure students’ socioemotional skills and including them as part of the Global Education Policy Dashboard. This information will give policymakers a more comprehensive picture of students' well-being, helping them to set priorities and track progress toward their goals.

Dr. Richard Davidson’s vision is for a kinder, wiser, more compassionate world. This vision is complementary to the World Bank’s commitment to reducing poverty, increasing shared prosperity, and promoting sustainable development, as economic growth does not guarantee rising happiness. Thus, alongside our efforts to reduce poverty and boost shared prosperity, perhaps it is also worth exploring the extent to which changing our minds could change the world.