Early childhood education in Mongolia – who is still excluded?

International Children’s Day is celebrated in Mongolia as an official holiday. I could see that it provided an opportunity to reflect on the country’s commitment to create opportunities for its children to thrive and realize their full potential in school and adult life. Nowhere is this commitment more evident than in the education sector. With near-universal access to basic education achieved, legislation and government policy now calls for the expansion of early childhood education (ECE) services to cover every child in the country.

Mongolia has demonstrated impressive gains in coverage of ECE services

A recently-published World Bank report shows that this high-level commitment to ECE rests on a foundation of strong demand. Kindergartens cover about 70 percent of children aged three to five years. Another 10 percent receive alternative ECE services, under which mobile or ger kindergartens are most common and target Mongolia’s hard-to-reach nomadic population that practices the traditional herder lifestyle, living in portable tents known as gers set up at least 5–15 km from each other.

Coverage of ECE is comparable to- if not higher- than that in many significantly richer Eastern European and Latin American economies. While long-term returns on Mongolia’s ECE investments have not yet been studied, initial results are promising and show that, among kindergarten-enrolled children, longer kindergarten exposure is associated with improved performance on a range of foundational cognitive and non-cognitive skills.

I believe that this is phenomenal progress. A large body of evidence from across the world, together with the emerging science of brain development, shows that early childhood is a critical period for shaping productivity. This is when the brain develops rapidly to build the foundation of cognitive and non-cognitive skills, such as attentiveness, motivation, self-control and sociability – skills necessary for success not just in school, but also the labor market and adult life (see review and references in this working paper).

Many children in greatest need of ECE are still excluded

The largest benefits and highest returns reported are in high quality programs that target children that need them the most. These are children who come from socio-economically disadvantaged and vulnerable backgrounds. Their families and home environments are often unable to provide the nourishing, supportive environment needed to develop the cognitive and personality skills that create productivity.

In Mongolia, many children from disadvantaged backgrounds are excluded from the system (Figure 1). 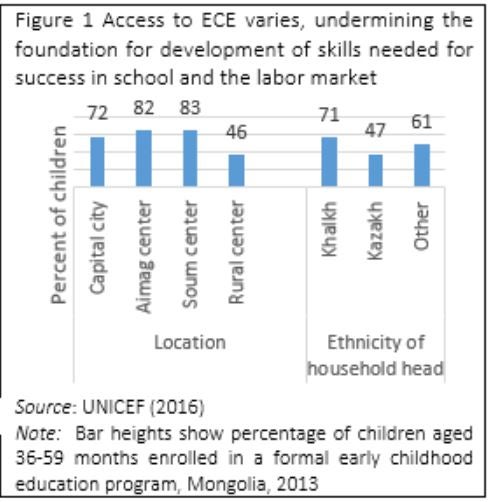 Geographic and ethnic gaps remain large. Enrollment rates in rural areas lag behind those elsewhere in the country, standing at a mere 46 percent among children between the ages of 36-59 months. Ulaanbaatar, the capital city, lags behind province and village centers by a sizable 10 percentage points. The enrollment rate among Kazakh households is a full 24 percentage points lower than among those in the majority Khalkh ethnicity.

Household wealth is a key determinant of preschool enrollment, with children from households in the poorest quintile of wealth almost 40 percentage points less likely to enroll in preschool than those from the richer quintiles. The wealthiest households thus benefit the most from public ECE services. Herders’ children remain underrepresented in the system, relative to their share in the country’s population.

In rural Mongolia, community- or home-based ECE modalities are best-suited for hard-to-reach populations such as nomadic herders. An excellent example is the intervention implemented in Mongolia by Save the Children Japan between 2012 and 2017. It enhanced school preparation through use of a home-based curriculum, capacity building and technical support for parents and teachers, and community mobilization. In urban areas, a potentially expanded role for the private sector should be considered.

This is the first in a series of blogs on early learning in Mongolia. Stay tuned for future blogs that will look at quality of ECE, child development and early leaning outcomes, and implications of these for effectiveness – and returns – of Mongolia’s education investments.