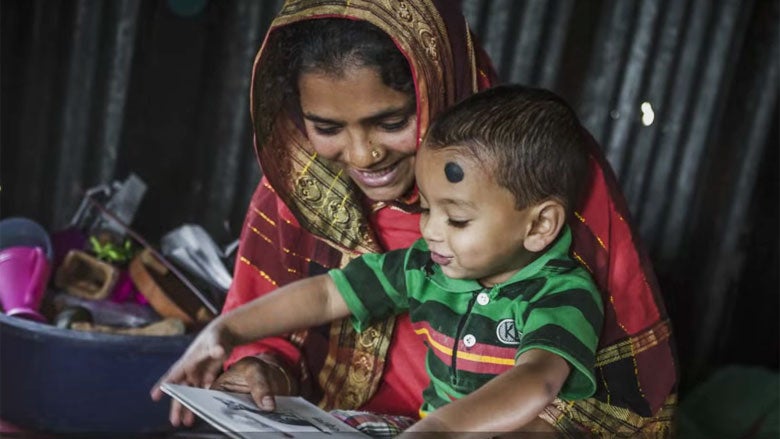 This Children’s Day, I am thinking back to an event on the link between quality education and inclusive growth that we had last month in Lima, Peru. The event was memorable not only because of Eric Hanushek’s excellent presentation and the lively panel discussion that followed, but also because there were many students from Lima in the audience.

A month later, I still remember the young faces and how intently they were paying attention to everything that was being said about their futures. At the time, I thought, this is how it should be. There should always be children and youth involved and engaged when the discussion is about them.

Yet the truth is that children rarely participate in conversations pertaining to them. This is obviously truest of children who are not yet in school, who are too young to have any kind of voice, and who depend entirely on the adults around them for their well-being.

In poor communities around the world, the child’s mother may not even have a voice for herself, leave alone for her children. This is why it is so important for champions and advocates to draw attention to children’s issues—the attention of policymakers in government as well as, most importantly, the attention of parents themselves.

A very exciting recent champion of young children’s issues is Novak Djokovic, arguably one of the greatest tennis players in history. Please take a minute to listen to what Novak has to say as he works with UNICEF and the World Bank to bring home the importance of giving kids a head start at the right age.

For example, one evaluation that we conducted of a preschool program run by Save the Children in Mozambique showed that children enrolled in this program often entered school at the right age, were more ready to learn, and less likely to drop out from primary school. Subsequently, the government of Mozambique has been making a strong effort to bring early childhood development to the poorest communities in the country.

Another really great finding—this one from a study by Gertler, Heckman, and others in Jamaica—shows that early childhood stimulation can raise a child’s income significantly when she or he grows up. I look forward to the results of a new study that is being carried out in Bangladesh to show mothers and other caregivers in poor families how to stimulate children. Once again, this is an impact evaluation of a Save the Children program, linked with the Bangladesh National Nutrition Service.

This Children’s Day, let us dedicate ourselves, like Novak, to doing what is right for young children, who have no voice, and to finding out more about what works for them. Paying attention to children’s healthy development is not only the right thing to do as we continue the effort to end poverty, it is also increasingly backed by strong evidence and is part of the new Sustainable Development Goals agenda. thanks Claudia for raising this issue. Early Childhood Development is about the most important area of education in the developing world. Young people and the development of young people is pivotal for a better world. For the poor the crucial intervention is create an awareness of the value of education, the importance of learning to read and being socialized into an intellectual culture. Bowles and Gintis told us many decades ago schools have a tendency to reproduce the status quo. In very poor contexts there has to be some radical actions or interventions for the poor so that education creates the platform for social mobility. If a child does not learn to read by the age of 8 they are most likely to drop out of school
I am also delighted that UNICEF and the World Bank views this issue very seriously. Current developments in the world, more specifically the terror in Paris, suggest that there are many disaffected youth particularly amongst the poor. The youth should be taken care of and we need to find ways in which we can assist across the world in this process of addressing the challenges faced by the youth. How do we prevent youth from not taking education seriously? How do we change our education programmes? How do we advance a new narrative for the youth and society? How do we change the status quo so that we provide the youth with hope and a desire to advance themselves in constructive ways? How do we develop education programmes that are more relevant and meaningful to the youth across the world. Thanks again Claudia for the raising the issue of poverty and education.