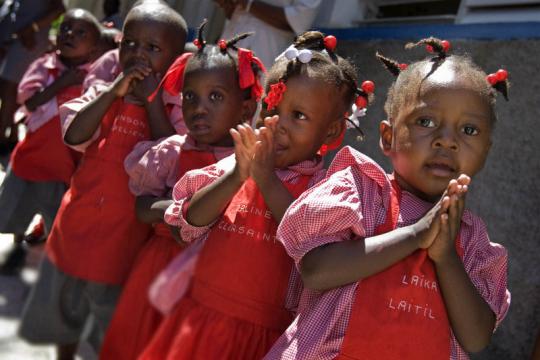 With 95 percent of its population of 10 million under age 65, Haiti’s most abundant asset is its human capital. Given this large share of children, youth and working-age adults, education is both an ongoing challenge and policy priority for the Government of Haiti. Yet decision-making on education has been hampered by a lack of reliable data, with even basic information such as enrollment rates being difficult to estimate reliably.

The recent release of the Haiti Poverty Assessment report is therefore a big step forward. It provides new and critical evidence on the well-being of the population, including poverty, education, and health, based on the first comprehensive and nationally representative household survey since 2001. We have now learned, for instance, that while gains have been made in access to primary education, Haiti will be one of the countries that do not meet the second Millennium Development Goal on universal primary education, and the quality of education at this level is still far from consistent.

Ninety percent of 6-11 year olds (official primary school age) in Haiti are enrolled in school, but access remains unequal. Whether a Haitian child is in school is strongly correlated with where and to whom he or she is born. Children in poor families, those living in households without their parents, and those in rural areas are all less likely to be in school. In part, these inequalities reflect the fact that over 80 percent of primary schools are private, with a variety of different actors running schools, and parents bearing most of the financial burden. Other factors, including the need for child labor at home, on the farm, or in the marketplace, also matter.

Poor and rich families alike place a high value on education, spending an average of 10 percent of their total household consumption on educating their children. But poor families often do not get a quality education for their money. While representative learning assessments have not yet been conducted in Haiti, several indicators raise red flags about the quality of teaching and learning happening inside Haiti’s schools. The average age of new first graders is nearly eight years when it should be six, and grade repetition rates are over 10 percent, above the averages in Latin America and Sub-Saharan Africa.

Among the poor, these distortions are even greater. Early grade reading assessments conducted in poor communities have found that third graders can only read an average of 23 words per minute (too slowly to understand the meaning of basic text). Among 10-14 year olds, 62 percent of poor children are at least two years over age, compared with 38 percent of non-poor.

These findings help fill many gaps in our knowledge, but there is still much more that needs to be understood in order for Haiti to achieve universal, quality primary education. Building a robust information system to directly inform policymaking is one of the key recommendations for education emerging from the Poverty Assessment. What will it take to get the remaining out-of-school children into classrooms? Why do children start primary school so late? What are students actually learning? These are just some of the questions in need of answers, and to help answer them, the World Bank is supporting several new data collection and analysis activities in partnership with the Government. These include structured interviews with school directors, teachers, and parents about primary entry; classroom observations to see how teachers use class time; representative learning assessments; and analysis of administrative data.

This knowledge will help increase the Government’s capacity to develop well-informed plans in the education sector. Only with a solid base of knowledge can Haiti make the policy and investment choices needed to ultimately be able to provide universal quality primary education to all children.