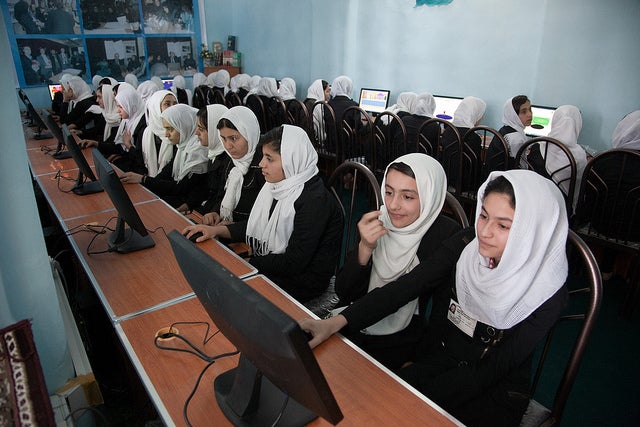 Increasingly, there is a curious trend in America in which the country’s wealthiest, best-educated, most tech-savvy parents work hard and pay good money to keep their children away from digital technology. For example, executives at companies like Google and eBay send their children to a Waldorf school where electronic gadgets are banned until the eighth grade. And, Steve Jobs famously told a reporter that he didn’t let his children use iPads: “We limit how much technology our kids use at home”.

What is it that these parents know? And, how should it affect technology policy in education around the world?

I used to work at Microsoft, and for my last five years with the company, I ran a research group in India in which we did many projects to address developing-world education with technology. MultiPoint allowed a single personal computer to be equipped with multiple mice, each with its own uniquely colored cursor so that many children could interact with education software simultaneously. Collage permitted teachers to project imagery and text on a projector without the hassle of PowerPoint. Cloze made it possible to edit educational game content via a simple text file. And on and on. Yet, while all of these projects did well in controlled research studies, they did poorly in actual classroom situations. For the most part, more technology did not contribute to more learning.

There are many reasons.

First, digital technology requires a lot of skill and resources to use and maintain, and the world’s poorest schools generally can’t afford the required support on an ongoing basis. I remember many instances in which a teacher would fumble with the technology for 15-20 minutes before it was operational, which meant that a large portion of class time was lost.

Second, good pedagogy is difficult enough in itself, but when combined with the additional burden of incorporating computers, it is even more difficult. Teachers are already managing a host of constraints – from limited time to large class sizes, from school regulations to standardized curricula. To be asked to involve computers in an effective way on top of that can be a steep challenge.

Third and perhaps most significant, digital devices tend to amplify students’ natural inclinations for distraction. The cognitive candy of high-contrast graphics and sound effects makes all other forms of interaction unappetizing. Students become addicted to sensory stimulation for its own sake and bypass deep thinking and learning. It’s like giving them sweets before dinner.

In fact, rigorous experiments with computers in and outside the classroom show very clearly that they have no educational advantages on average. This was found in Peru with the One Laptop Per Child project, and in California with regular laptops.

Some educational technology proponents argue for gamification, in which all forms of learning are turned into games – video games, of course, when it involves digital tools. But imagine a system in which students go through K-12 learning via video games. Even if they learn the required science and history, they will graduate without knowing how to learn anything not embedded in a game. In other words, they will have not learned the most important lesson of a good education – how to be self-motivated learners who can learn new things on their own.

Shrewd parents intuit these things. They know that there is a big difference between knowing how to use a computer and being a software engineer. Anyone can use a computer – as witnessed by the widespread use of Facebook, even among people with little education. But writing software is challenging and requires a strong foundational education – which above all requires good adult guidance. It is a lot like the difference between knowing how to drive a car (easy, and easy to learn even as an adult) and being an engineer who designs car engines (hard, and requires a good educational foundation).

What is vexing is that the parents who know this best are often the strongest proponents of technology for other people’s children. Even as Steve Jobs kept devices away from his children, his company pushed hard for iPads in schools. It’s a great hypocrisy. At best, these parents provide their own children with the best adult guidance, but suggest that others should be content with flashy toys. At worst, they are selling a solution they don’t believe in for the sake of their own selfish gain.

Either way, it’s a deal that wise educators and policy makers should stay away from.

(Note: None of this is to say that a school shouldn’t have a computer lab or offer computer programming courses. Some interaction with computers is helpful for education in the same way that music or art classes are. It provides enrichment opportunities, and it may inspire students. However, this is very different from providing every child with a gadget that isn’t integrated into a well-supervised curriculum.)

The views & opinions expressed by guest bloggers for Education for Global Development do not necessarily reflect the opinions & views of the World Bank Group. I fully agree,upto 10th grade use of computers be limited to exposure level & highly monitored by teachers/parents.Over & non monitored harms children's in depth thinking abilities which are essential in real world.Tablets with pre recorded curriculum can be used as aid to support class room teaching

This a very interesting and relevant read! Schools in developing countries already struggle with immense constraints regarding keeping up with some of the most basic classroom requirements such as textbooks. Advising these schools to redesign teaching methods by incorporating computers into classroom learning is certainly cumbersome and perhaps more idealistic than practical. I find it crucial that you point out as demonstrated by research, that technology gadgets do not necessarily increase classroom learning - ironically discouraging learning than encouraging it.
As you highlight, the significant contrast between advice given by the technology proponents and the ideals they actually practice personally is one that certainly embodies great caution for education policy.

This is yet another concern to explore how technology can have an adverse effect on learners. I agree that the basic educational foundation should be fortified first, before young learners engage in the process to heavily. Individuals depend heavily on electronics, and somewhere along the way the internet can become a social playground rather than a tool to increase learning. 11/3/15

Exploring how technology can have an adverse affect on learners is yet another concern in terms of information, and communication technology. The foundation of basic educational pratices should first be fortified before learners are exposed to an over abundance of digital technology. As a global society individuals depend heavily on their devices, and often lose sight of communicating one-on-one. The internet can become a social playground rather than a place of enhancing learning.
M. E. 11/3/15
PS-what are your thoughts in terms of the impact of globalization for the marginalized populations?

Thanks for the post. Just noting that the link to the One Laptop Per Child Peru Assessment doesn't actually link to the report, but can be found by searching quite easily.
Food for thought: What about in the case where technology is a cheaper delivery system for curricula, and not simply just there to augment existing pedagogy? With the high cost of textbooks (printing, logistics, development and licensing), OER materials and (relatively) cheap technology can (potentially) deliver learning materials more efficiently.