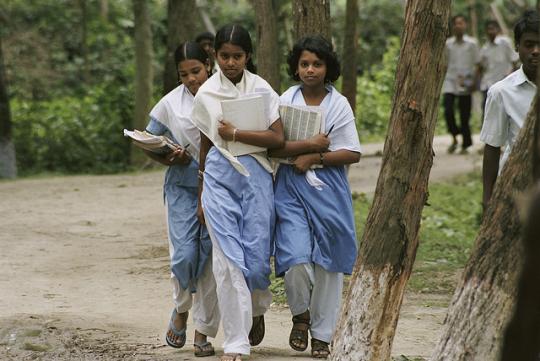 Today the U.K. government and UNICEF jointly hosted the first Girl Summit to mobilize efforts to end child, early, and forced marriage as well as female genital mutilation. According to a 2013 report by UNICEF, 30 million girls are at risk of suffering genital mutilation  over the next decade. Recent reports by UNFPA and UNICEF suggest that more than one-third of girls are married before age 18.

The incidence of child marriage is dropping, but only slowly. In many countries, laws have been adopted to prevent marriage below 18 years of age, but they are often not well-enforced and more needs to be done. There is widespread consensus that child marriage violates the rights of girls, limits their school attainment, learning, and future earnings, and has negative impacts on their’ health and that of their children. Child marriage clearly contributes to poverty and limits economic growth. And yet the practice continues to be perceived mostly as a social issue, not an economic one.

What is the economic cost of child marriage?  We don’t really know. Studies – including those by the World Bank – suggest a range of negative impacts of child marriage on human development outcomes. For example, Bank staff have estimated that in sub-Saharan Africa child marriage may account in some countries for up to one-fifth of drop-outs among girls at the secondary level, and each additional year of delay in the age of (child) marriage could potentially increase the likelihood of literacy and secondary school completion by several percentage points for the affected girls. Another study published a few years ago in the Journal of Political Economy suggests similar impacts in the case of Bangladesh.

Unfortunately beyond such studies, there is very little research on the overall impact of child marriage on countries and their economies, including in terms of lost wages, productivity, and ultimately growth.  If the economic cost of child marriage were better estimated, this might provide incentives for governments to invest more toward the elimination of the practice.

To this end, the Bill and Melinda Gates Foundation and the Children’s Investment Fund Foundation announced today a new $4.2 million investment toward a unique, three-year research program to measure the economic cost of child marriage. The research will be led jointly by the International Centre for Research on Women and the World Bank. It will generate new global, regional and country evidence on the consequences of child marriage and its economic cost.

The research program will have three phases, each taking about one year.  In the first phase, a conceptual framework will be prepared to document the various pathways through which child marriage affects girls, their children and families, their communities, and societies at large.  In this phase, existing household surveys will be used to measure the impact of child marriage on a range of outcomes and on economic development.

In the second phase, researchers will undertake in-depth data collection and analysis  in three countries to validate the models developed in the first phase. In the third phase, results from the two first phases will be synthesized and broadly disseminated for policy dialogue and advocacy. A range of capacity building and dissemination events will also be organized.

This new program of research will provide the first global estimates of the economic cost of child marriage, as well as pilot in-depth case studies for three countries that could then be replicated by others elsewhere. Research will inform policymakers not only about the cost of child marriage, but also about the types of interventions that could help eliminate the practice.

We look forward to partnering with ICRW, CIFF, and the Bill and Melinda Gates Foundation on this important initiative. Girls everywhere have the right to be protected against early and forced marriage so they can be healthy, educated, and reach their full potential.

In Pakistan, the school dropout rate is the highest among secondary school students. Child marriage is the core cause of dropout at secondary level particularly in rural areas.