Takeaways from the Global Education & Skills Forum in Dubai 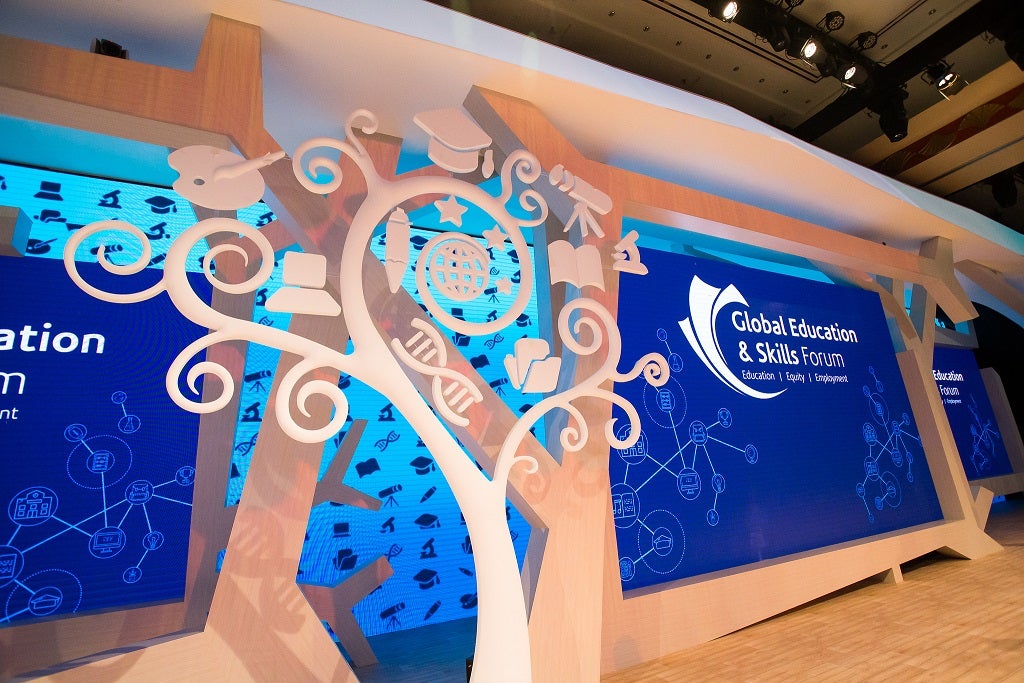 Amid the glitz of the Global Education and Skills Forum 2018 in Dubai last month, Harry Patrinos and I joined a list of high-caliber speakers who talked about everything from education technology and teacher recruitment to special education and classrooms in conflict zones.  We can prove we were there, because one of the featured organizations, Blockcerts, provided participants a certificate of attendance – using Blockchain – which we will be able to share and verify for our lifetime.

More than 2,800 delegates from 150 countries—including development practitioners and educators from across the globe who spend their days preparing young people for future—gathered for the event, which focused on the future of education.

Indeed, the Forum focused on the potential surrounding new technologies and painted a rosy picture of the future of both work and education.  But as Harry and I both noted in our talks, beyond the hype and advocacy, there is a need to take stock of where we are: technology will primarily disrupt the workforce, but this will have a domino effect in the world of education, where the right skills and attitudes are becoming even more critical .

This is an exciting time, but the sobering news is that most education systems are not prepared for the future ahead of us.  Much more needs to be done to prepare students and to reform education systems quickly —which Harry and I both explored in our separate talks.

In “Will automation in the workplace revolutionize education?” Harry argued that we are moving rapidly into Industry 4.0—despite education systems that are stuck in Education 1.0 . But he also highlighted how best to prepare young people for the world of 2030 and beyond, and ways that technology, including blockchains, will disrupt education and allow people to manage their academic and professional records in a transparent, secure, and universal way.  The potential, as Harry sees it, is enormous: at the very least, it will reduce diploma fraud, but it also has the potential to facilitate lifelong learning so that students can receive, hold and share their credentials anytime and anywhere.

In my talk, which focused on the future of education in the Arab World, I stressed the importance of quality education for the entire region— but warned that young people entering the education system this year and who will graduate in 2030 will be unprepared for the future. Funding levels throughout the Arab world are high and exceed those of other regions, but countries need to make smarter education investments. Most importantly, diverse stakeholders need to come together to prioritize learning—starting now.

I left Dubai inspired not so much by the celebrities like former President of France Nicolas Sarkozy or Indian actress Priyanka Chopra—though both were certainly impressive speakers. But throughout the event, I had the privilege of meeting young people from around the world and hearing about their tangible contributions to education through the development of simple, yet transformational, technologies.

Take Emma Yang for example. Just 14 years old, she is the founder of Timeless, a simple and easy-to-use mobile app for Alzheimer’s patients to remember events and stay connected with friends and family. Amazingly, the app can also recognize people through automatic artificial intelligence-based facial recognition technology—enabling people with Alzheimer’s to remain engaged with those around them. A young refugee named Mursal Hedayat, is another great example. She founded Chatterbox, a social startup that employs skilled refugees as language tutors—which won a prize for also helping refugees learn languages. Another young woman I met uses blockchain to help refugees have their credentials in a centralized digital place. Providing individuals with tamper-proof, maximally-transferrable, and instantly-verifiable digital records means that the refugees don’t have to worry about sacrificing their identities, achievements, and even their property titles. With this tool, governments and aid organizations can save vast resources that are currently used for vetting, containing, and documenting refugees and displaced persons. The potential is enormous, and in education, validating academic records—and ensuring some stability to a refugee’s future life trajectory—is transformative.

The Forum also hosted three students from Parkland High School in Florida, scene of one of the world's deadliest school massacres. Hearing their story was heartbreaking but their determination to lead change with eloquence and passion was both uplifting and refreshing. Indeed, the challenges are great, but watching these young people from diverse backgrounds across the globe shape their future was truly inspiring.

There is much work ahead of us and we will keep busy with follow through in the months leading up to the next Forum in March 2019. And at the World Bank, we will continue to work with countries as they transition to the twenty-first century, ensuring that their youngest citizens have the educational foundation and skills to thrive in the face of challenges ahead .

See also short Devex interview with Harry at the event. Adviser, Office of the Chief Economist for Europe and Central Asia