e-Learning in Korea in 2011 and beyond 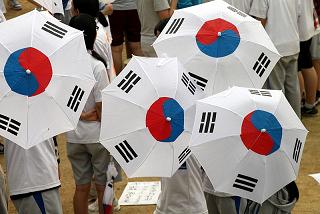 Each year the World Bank helps sponsor an annual global symposium on ICT use in education for senior policymakers and practitioners in Seoul, together with the Korean Ministry of Education, Science and Technology (MEST) and the Korea Education Research & Information Service (KERIS). This is one important component of a strong multi-year partnership between the World Bank education sector and the Republic of Korea exploring the use of ICTs in the education sector around the world. This year's event, which focused on Benchmarking International Experiences and was about half the size of 2010's Building national ICT/education agencies symposium, brought officials from 23 countries to Korea to explore how technology is being used in schools around the world (previous blog post: Eleven Countries to Watch -- and Learn From), with a special emphasis on learning about and from the Korean experience.

Specifically, there was much interest in learning more about two news items that appeared since last year's event: Korea's top place in an international digital reading assessment and the country's bold plan to move toward digital textbooks in all subjects at all levels by 2015.

Back in June, it was announced that Korean students finished at the top of an OECD PISA survey that attempted to assess how well 15 year old students use computers and the Internet to learn. (For those who aren't familiar with PISA, this short animated video does a great job of explaining what it is in an engaging and understandable way.) This particular test challenged students to "evaluate information from several web-based sources, assess the credibility and utility of what they read, and navigate across pages of text autonomously and efficiently".  Korea was the top-performing country according to this conception of 'digital reading' -- by a significant margin! (Interestingly, Korean 15 year olds performed much better in 'digital reading' than they did with old fashioned printed materials.)

How to interpret these results will no doubt occupy researchers and policymakers intensely in the coming years, but there appears to be little doubt that *something* interesting must be going on in Korea.  Just what is it?

Given these impressive results  on measures of 'digital reading', one is often initially surprised by the low apparent use of technology when one visits many Korean schools.  I have accompanied policymakers and international experts on visits to Korean schools for each of the past six years, and many first time visitors have the same reaction: Where is all the technology?  Visit a school in Uruguay, and the technology (in the form of little green laptops that each student owns, paid for by the government) is hard to miss. Visit a South Korean school, however, and the lasting impression of technology use is usually a television at the front of each classroom utilized as a computer monitor for a teacher to present information to her students.

How come Korean students score so well on international measures of 'digital reading', then?

If you want to see Korean students using technology intensively, wait until the school bell rings to end the day and watch kids once they leave school grounds as they reach into their backpacks to switch on their mobile phones -- or head to one of the many Internet cafes where you'll see kids gaming -- or pop into one of the "cram schools" that provide after-school tutoring to Korean students beginning at a very young age and increasingly aggressively market their use of technology in attempt to woo families to pay for their services.  Or, even better: Go to a Korean home, which enjoys by many calculations the world's fastest Internet connections.   It is not difficult to imagine that many students spend more time at home using the government-sponsored Cyber Home Learning System than they do using computers at school.

Speaking about findings across countries, and not just Korea, the OECD researchers found that, "After accounting for students’ academic abilities, the frequency of computer use at home, particularly computer use for leisure, is positively associated with navigation skills and digital reading performance, while the frequency of computer use at school is not. These findings suggest that students are developing digital reading literacy mainly by using computers at home to pursue their interests."

Many policymakers in Korea are well aware of these findings, and are exploring ways of bringing the 'revolution' that ICT is bringing about in larger Korean society into schools in a big way.  Korea has been actively 'computerizing' schools for the last 15 years or so, but, for the most part, computer use appears to have had little fundamental impact on the way teaching and learning happens in schools.  (In this, of course, Korea is not alone.) For this to happen, Korean policymakers argue, what we need is 'Smart Education'.

Digital textbooks (a topic also covered in an EduTech blog post from earlier this year) are an important component of Korea's new Strategy of Promoting Smart Education, which will also will see increased efforts on blanketing Korean schools with high speed wireless networks and moves to more computer- and Internet-based assessment.  KERIS -- essentially the country's national ICT/education agency -- has been piloting 'digital textbooks' in various forms for the past four years or so in preparation for the move by 2015 to using digital textbooks in all schools in all subjects at all levels, something which the BBC recently heralded as "opening a new chapter" in the story of Korean education.

In the words of KERIS, "Digital Textbook is 'the textbook of future' which provides various interaction functions with students to study anytime, anywhere and it also contains references books, workbooks, learner's dictionaries, notebooks, and existing textbooks as well."

It is not one specific device -- indeed, the idea is that digital textbooks will be accessed/viewed on many different things, from tablets to desktops to laptops to phones (and, just possibly, on devices not yet in widespread use in education). At this year's global symposium, a digital textbook was demo'ed on an iPad; the KERIS school-based pilot program used tablet PCs. The Korean Digital Textbook site outlines the features and affordances of the planned 'digital textbooks', comparing them with the old fashioned paper kind. An informative presentation [pdf] at the global symposium outlined where Korea may be going with its digital textbook initiative between now and 2015, while noting that many challenges will need to be overcome, including the inevitable resistance at the classroom level to large-scale change efforts.  Research from the KERIS pilot programs found very small impact on educational outcomes and there are understandable worries about how to ensure positive returns on what will undoubtedly be very heavy investments in technology in the coming years.

While many if not most other countries look on Korean performance on international tests like PISA with envy, in Korea itself there appears to be -- at least based on presentations at this year's symposium -- an intense pressure to do better.  Indeed, one of the real strengths of the Korean education system may be that so many parents express dissatisfaction with parts of it, and thus constantly challenge government, schools, and their children to do better. How do you improve a system that already appears, at least based on comparative international assessments, to be so high performing? 'Smart Education' is one attempt by Korean policymakers to help answer this question.

Some international observers may argue that Korean 'smart education' seems to be largely about improving the technical infrastructure for the education system. This may or may not be true -- only time will tell.  When I hear such comments, I impulsively think about other plans in Korea to radically increase the amount of affordable Internet bandwidth to Korean homes.  The typical Korean family currently enjoys levels of broadband connectivity that are unfathomable in most other parts of the world -- 100 Mbps, more than most entire universities in Africa.  Not content with having some of the world's fastest and most affordable broadband, the Korean government announced plans to up this figure to 1 Gbps (!). What happens when each family has access to the Internet at one gigabit per second? We don't know, is the reply one hears from some policymakers, but won't it be interesting to find out?

Note: The image used at the top of this blog post of Korean students celebrating a School Sports Day ("seeking protection from all that cheap bandwidth!") comes from Wikipedian 'Spaicecowboi' via Wikimedia Commons  and is used according to the terms of its Creative Commons Attribution-Share Alike 3.0 Unported license.