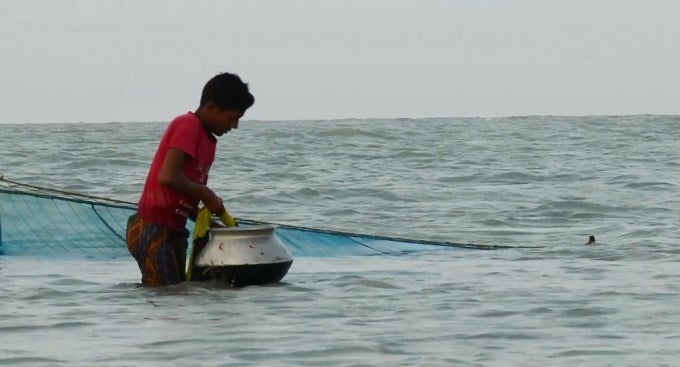 Maintaining and restoring ocean ecosystems – or ‘ocean health’ – is synonymous with growing ‘ocean wealth,’ according to a soon-to-be published report by the World Bank and European Union. With rapid population growth, limited land and fewer terrestrial resources to house, feed and provide citizens with their energy needs, coastal nations across South Asia are looking seaward. In doing so, countries are clueing in on the fact that sustainably managing and developing ocean spaces is critical to a nation’s economic advancement.

Thinking Blue - thinking how best to sustainably tap ocean spaces as new sources of sustainable growth and transition to a blue economy - is new, although South Asian nations have used the sea for food and trade for centuries. Five years ago, few had an inkling of the emerging importance of the term 'blue economy.'

By late 2017, at the Second International Blue Economy Dialogue hosted by the Government of Bangladesh in Dhaka, interest in what the blue economy is and why it matters is at an all-time high and rising. Perhaps this not surprising.

Our oceans cover more than 72% percent of the earth’s surface. It gives us food, essential protein and nutrition, as well as jobs (more than 350 million in poor countries), and recreation for a large portion of the world’s population. Oceans drive global GDP: 80% of global trade, 32% of hydrocarbons extracted for energy needs, and for almost 200 countries, tourism.

The Organisation for Economic Co-operation and Development estimates that our oceans contribute US$1.5 trillion annually, or roughly 3 percent of global value added and will be the source of the greatest number of new jobs over the next several decades.

As more and more countries look to the ocean as a new economic frontier and new source of industrialization and growth, the ecosystems upon which many ocean economic activities depend are changing at an unprecedented rate, and not necessarily for the better. While the ocean is responsible for generating 50 percent of the oxygen we breathe and can sequester up to five times more carbon than tropical forests, this important function is under threat due to climate change and other human-initiated factors.

However, of the 54 ocean-facing nations, Bangladesh stands out. It is one of the few non-island countries that has been working systematically toward understanding how their coastal and ocean area could become an engine for sustainable development and economic growth. In 2014, Bangladesh hosted the First International Blue Economy Dialogue in Dhaka and Her Excellency Prime Minister Sheikh Hasina became the first head of state to give a nationally and internationally recognized televised speech on the blue economy. She pointed out that Bangladesh’s ocean space is a “new horizon” for sustainable economic growth and development.

The Government of Bangladesh is simultaneously leading and learning - hosting and joining high level international dialogues. In fact, Bangladesh and Portugal were two coastal countries that convened with small island developing states in Grenada to consult on a World Bank report that estimated that the economic contribution of the Caribbean Sea to GDP. Policymakers of that region agreed that you can’t manage what you don’t measure. A similar strategy is unfolding in Bangladesh and other South Asian countries to guide decision-making over policy and investment.

The World Bank and the European Union are supporting Bangladesh’s effort to better understand what the blue economy is and why it matters – essentially providing high level technical assistance and policy guidance on how transitioning to a sustainable coastal and ocean economy or blue economy. Together with the government, the forthcoming report lays out four steps to be followed:

Bangladesh is poised to realize its ocean wealth by finding new sources of sustainable growth from its coastal and ocean areas. However, sustained positive impacts for poverty reduction and shared prosperity can only happen if Bangladesh continues to remember that maintaining ocean health is a precondition to sustainably deriving ocean wealth.
Topics
Environment
Macroeconomics and Fiscal Management
Water
Countries
Bangladesh
Regions
South Asia
The World Region good initiative and all should adopt it and practice also.
Birahmani Ghulam Haider

This is a good initiative by the Government of Bangladesh, given that our collective future lies in maintaining the oceans, and in the marine environment and marine life.

Our Ocean is a full of resources. Many countries in the world extracted marine sources through innovation and securing the marine environment without encouraging pollution. Though Bangladeshi government is late to exploit this resource, good initiative at all for giving the concentration on it.