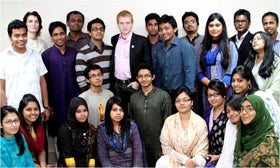 It was a special day on Sunday, December 11, 2011 at the Bangladesh Youth Leadership Center (BYLC) as Special Advisor to the State for Global Youth Issues, Mr. Ronan Farrow and Ms. Lauren Lovelace, Director of the American Center, visited the institute in Baridhara. Mr. Farrow gave a lecture and engaged in discussions on global youth leadership issues with a classroom packed with enthusiastic BYLC graduates. In his address to the graduates, he expressed his strong belief that they are to play a key role in confronting challenges of the world. He shared that one of the greatest lessons in life that he received is “the realization that how powerful youth can be when given voice and equipped with tools.”

Farrow, who is a Rhodes scholar-elect 2012, has accomplished immense global recognition in advocacy and humanitarian work at the mere age of 23! He shared experiences of his personal struggles of ‘getting his voice heard’ while attending college at the age of 11 to later carrying out his work as a human rights activist, journalist, lawyer and government official. He pointed out how important it is to mobilize Bangladeshi youth to confront development challenges and avoid destructive behavior that is often created from lack of economic opportunities.

During the discussion session on youth issues in Bangladesh, BYLC graduates conveyed their thoughts and shared some ideas which would help to strengthen youth leadership in the country. Sumaiya, a Building Bridges through Leadership Training (BBLT)-3 graduate, expressed how important it is to encourage opportunities for youth interaction to culture cooperation among young people from different academic and social backgrounds. She pointed out how the BBLT program has helped develop her understanding and interpersonal communication skills to bridge relations with students and communities from different backgrounds.

When Marjuk, a BBLT 2 graduate, expressed his concern on the disinterest of youth to enter government jobs, Mr. Farrow shared how his personal motivation to work in government came by harnessing his critical perspective on political, social and economic issues into the drive to generate results in the existing system. Ms. Lovelace also agreed and expressed that “it is possible to bring change if you work with the right heart and prove excellence when you come into service.”

Farrow suggested a solution to getting one’s voice heard to political leaders is to work with Civil Society Organizations, if not government, and to use media to mobilize young people. He urged graduates to not lose sight of staying connected with the next generation of youth, when Sarah, a BBLT-6 graduate, brought up the issue of youth voice getting through to the government.

After the hour and half long session with BYLC graduates, Mr. Farrow expressed his optimism for Bangladesh and urged the participants to continue to exercise their leadership potential in the country. It was indeed an inspirational and great learning experience for the graduates as their active participation and smiles were prominent throughout the event! When Ejaj Ahmad, President and Founder of BYLC, asked Mr. Farrow what advice he would like to leave with the graduates, Farrow left a short yet powerful message, quote:

“Really believe in what you are doing, and don’t let anyone tell you that you can’t, not even YOU.”