South Asia’s Commerce Ministers meet in Thimphu on July 24. Getting there would not have been easy for many of them, with no direct flights between Thimphu and four of the seven capitals. In June, when some of us convened for a regional meeting in Kathmandu, our Pakistani colleagues had to take a 20 hour flight from Karachi to Dubai in order to get to Kathmandu! This is symptomatic of the overall state of economic engagement within South Asia—in trade in goods and services, foreign direct investment and tourism.

South Asian countries’ trade policies remain inward-looking compared to other regions, and there are even bigger barriers to trade within the region. Today, South Asia today is less economically integrated than it was 50 years ago. Figure 1 below shows that intra-regional trade in South Asia accounts for less than 5 percent of total trade, lower than any other region. It is quite natural for countries to trade a lot with their neighbors, but South Asia has managed to negate this natural process. Several studies show the significant potential for increasing intra-regional trade in South Asia—for example, a study shows that with reduced obstacles to trade, intra-South Asia trade would increase by at least 250 percent (from the current level of USD 28 billion). Potential gains for smaller countries in the region would be higher.

In South Asia, regional economic integration is particularly important for the landlocked border sub-regions, which otherwise tend to be disproportionally poor. Regions with the most potential for benefiting from enhanced cross-border trade include Bangladesh, Nepal and Northeastern India in the East and Afghanistan and Western Pakistan in the West. These regions also include a large number of poor, as shown here.

South Asia also lags behind in intra-regional investment, even more so than in trade. The contrast between South Asia and South-East Asia is stark (see Figure 2 on “greenfield” or new investment inflows). There is potential for much higher levels of intra-regional FDI, if the investment regimes become more transparent and provide a level-playing field for investors, irrespective of origin.

South Asia has been left behind in the race to integrate into global supply chains, a particularly dynamic segment of world trade. A well-functioning South Asia Free Trade Area (SAFTA) with minimal barriers to trade (supplemented by improvements of the investment regimes) could catalyze higher inflows of FDI, including intra-regional FDI, and unlock the barriers to the emergence of supply chains in the region, e.g., in apparel and textiles, automobiles, electronics and machinery etc. 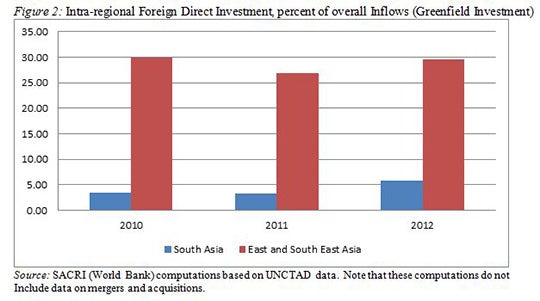 There is probably even greater potential for higher intra-regional trade in services, e.g., in tourism, education, health services and other business-oriented services. An obvious example: even if 0.5 percent of South Asia’s population started travelling within the region, that would mean 8 million tourists, with positive impacts on the tourism industry in each country. More importantly, it would provide a huge opportunity to increase shared understanding through people to people contact. Some key measures to increase services trade include easing visa restrictions, strengthening communication and transport links, fostering cross-border investments in different sectors, and enhancing enhance trade facilitation.

Seize the Moment
South Asia’s Commerce Ministers are meeting at a time when the region seems ready for change. Bold moves that capitalize on this changing environment and enable acceleration in South Asia’s intra-regional trade in goods, services and FDI can provide a major boost to each country’s development aspirations. The group can start by reinforcing and, if possible, accelerating, implementation of the SAFTA schedule for reducing the list of “sensitive products”, and reducing tariff and non-tariff barriers. Beyond that, the Ministers could use their undoubted influence at home to help galvanize movement in other areas that are awaiting a leg-up, such as the SAARC Agreement on Trade in Services (SATIS), harmonization of standards, promotion and protection of investments, and so on.
Topics
Financial Inclusion
Financial Sector
Macroeconomics and Fiscal Management
Poverty
Competitiveness
Countries
Afghanistan
Bangladesh
Bhutan
India
Maldives
Nepal
Pakistan
Sri Lanka
Regions
South Asia
Series
One South Asia An effort encompassing an actual ground situation and best possible remedial outcomes taken into perspective. A well deserved attempt to highlight synergy across all sectors in given regions. You deserve a profound praise in undertaking this research and incorporate all factors with vital importance.

Great article! Since India has been held responsible weak South Asia integration, Modi government seems to be inclined to engaged with neighbours in words and spirit. His first ever foreign visit after becoming PM to Bhutan and now going to Nepal on 3rd August,(after 17years any Indian PM will visit Nepal) is an indication of his seriousness. It is an opportune time for SAARC countries cease the opportunity for greater cooperation. But non state players have an important role to play to flag the issues and possible solutions since it is a government and does not have much experience in international engagements.The government will need inputs from stakeholders, experts and multilateral agencies to further the cooperation.

Great article. Full implementation of SAFTA would also benefit regional food security (see Chapter 3 in "Food Price Increases in South Asia: National Responses and Regional Dimensions" WB report publishes in June 2010) as well as act as a potential mitigator of the impact of climate change on food prices (see David Laborde et al. from IFPRI with Winston Yu and Hans G.P. Jansen from WB, "The Potential of Trade Policy to Mitigate the Effects of Climate Change on Agriculture in South Asia").

A timely article. The way forward for SAFTA does not lie in continued bargaining about which items to be excluded or included in the free trade lists; it will require above all creating a mindset for sacrificing narrow short-term business interests for a greater good. Any effective free trade arrangement is meant to create greater regional trade opportunities for industries which have comparative advantage within the region at the cost others which does not. An arrangement that wants to appease each and every business interest is liable to create only harmful “trade diversion” (replacement of lower-cost imports from rest of the world by higher-cost regional imports) rather than beneficial “trade creation” (expanded trade within the region based on comparative advantage of the regional trade partners). Given the asymmetric large size of the Indian economy within SAFTA, the other regional partners are more likely to have comparative advantage in the Indian market in particular items of the supply chains of an industry rather than in the entire industry. Allowing free trade, for example, in the supply chains in the textile industry – from raw cotton to ready-made garments – will be a good step in strengthening a “trade-creating” SAFTA.

Thanks to all for these comments, for reminding us that the time is opportune, that experts have a critical role to play, and that there are many unexploited opportunities-- such as supply chains, food security...and the list could go on.