Enabling children to grow: Tackling the multiple determinants of nutrition

During a recent visit to Barsam village in the Saharsa district of Bihar, I talked with members of a women’s self-help group - one of over 480,000 such groups formed under Jeevika, a rural livelihoods program supported by the World Bank in Bihar. 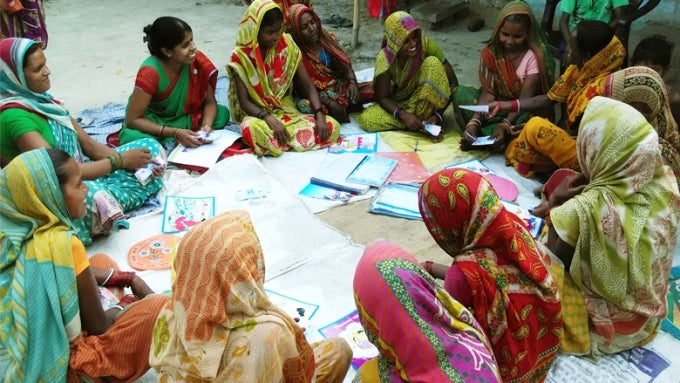 Among the group was nineteen year old Shobha. Like millions of girls across the country, Shobha had never been to school. She was married at fifteen, and now has a ten-month old daughter. Shobha sat among us, cradling little Anjali on her lap.

I was happy to hear that, when she was pregnant, Shobha enrolled herself at the local Aanganwadi center which offered nutrition and health services for both mother and child under a public program. At the center, Shobha learnt how to care for Anjali. As a result, the child was exclusively breastfed for six months and received all the necessary immunizations. Now the little girl is being correctly fed a diverse diet of vegetables, pulses, cereals and animal milk, while continuing to be breastfed.

But my happiness was only momentary. As we talked, it emerged that Anjali was only being given a spoonful or two at most of these foods. While the amounts were far from adequate, Shobha thought they were enough for a child of Anjali’s age. And, all the other women agreed.

Alarm bells rang in my mind. Not getting anywhere near the quantity of food she needed to grow well, and living in an environment where open defecation was common, Anjali was at high risk of becoming undernourished. Just one infection could push her over the brink.

There are millions of other children like Anjali, at high risk of becoming undernourished. An overwhelmingly large proportion of India’s children do not have any of the three key determinants for good nutrition that are essential during the first thousand days of a child’s life. These are proper food, adequate health care, and a clean environment, all three of which are critical from conception to two years of age, to set a firm foundation for future growth.

Sadly, fewer than 2 percent of India’s children in the critical age group have all three determinants in sufficient measure. And 63 percent of them get none of the three in the recommended degree. While these inadequacies are higher among children from poorer households, they are also present amongst the wealthiest of Indians - only 7 percent of children from these households receive all three determinants in adequate measure.

Even sadder is the unacceptably high level of childhood stunting in India. Stunting has lifelong consequences -- for the child, for the family, and for the country. It impairs brain and cognitive development, results in poorer school performance, increases the risk of chronic diseases, reduces productivity, reduces lifetime earnings by 10 percent, increases the costs of health care, and shaves off 2-3 percent from GDP.  While some improvements have been recorded recently, an overwhelming 38 percent of India’s children still remain stunted. Even among the wealthiest quintiles, stunting levels are over 26 percent.

It is sometimes thought that Indian children are shorter than their peers elsewhere due to their genetic make-up. While genetics does play a small part, there is strong evidence to show that all children have the potential to grow along a similar trajectory if they are fed and cared for as recommended, live in a hygienic environment, and receive timely treatment for infections.

Clearly, undernutrition has many facets. To improve outcomes, the World Bank’s Rural Livelihoods and Health Nutrition and Population teams are piloting a multi-sectoral approach. A pilot in the Saharsa district of Bihar is working through women’s self-help groups to promote behavior change in health, nutrition, water, sanitation and hygiene. The groups are being helped to access a range of public programs that have a bearing on nutrition: Integrated Child Development Services, the National Health Mission, the Swacchh Bharat Mission, agriculture extension programs and the Public Distribution System.

The pilot’s impact is currently being tested and results will be available towards the end of 2018. Learnings from the pilot will be adapted across the Jeevika project.

Evidence from the one-year feasibility study of the pilot is encouraging. It has been found that women are building their own capacity as well as working with communities to promote behavior change and increase demand for public services.

Barsam is one of the villages where the pilot is being implemented. Another Bank project - the recently approved $290 million Bihar Transformative Development Project - will scale up the multi-sectoral approach across another 32 districts of Bihar. This will hugely increase the number of Bihar’s children who can hope to be well-nourished in early life and escape the lifelong consequences of stunting. Little Anjali, and all others like her, will then have a better chance to grow up without old disadvantages, and live their lives to their full human potential. Hi Ashi - I enjoyed reading this blog. I identified with your description of seeing Anjali and the 'alarm bells' that go off when you piece together just how challenging it is to provide proper food, health, and care. Your paragraph on the rates of childhood stunting in India and the general effects of stunting was very tight - there's a lot to unpack and discuss there and you deliver it cleanly. You might be interested to look briefly at a video on the multisectoral aspects of nutrition, which aligns with several of the key themes in this blog: https://www.youtube.com/watch?v=sOiY510oY_Q. I and others I work with will be very interested to continued hearing about the Saharsa district pilot. Best of luck!

Thank you Aaron for your comment and sharing the video link. I will certainly watch it. Should it be of interest, a detailed and interactive analysis of the association of childhood stunting in India with the adequacy of food, care and environmental health is available in the eBook - Nutrition in India, on Inkling. You could log in with your Facebook account or create an Inkling account, and download the eBook for free. Hope you enjoy the analysis and the interactivity the eBook offers!

Pls suggest about new project our NGO working in MaharaMaharashtra.

Congratulations on a well written piece Ashi. The e-book is certainly highly user-friendly and interactive. Nevertheless, we may require a new edition once the full data set of NFHS-IV is released.