Everybody is an Innovator 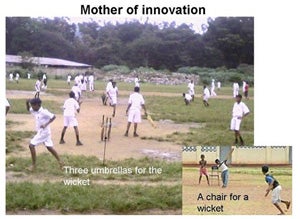 Join Thrishantha and other experts on the World Bank Sri Lanka Facebook page on April 2nd at at 4PM Colombo Time for a live chat on innovation!

One day, I was driving in a remote town in Sri Lanka, when I saw this encouraging scene. A few school kids were playing cricket on a rainy day, and they had made a wicket out of three umbrellas. It might look simple, but a very powerful message about innovation is hidden right there. An innovator in my view is somebody who practices to ask two simple questions: 1) is there a better way to do this, or simply, is there a way to do this? 2) why did it happen that way? The second question is driven by the curiosity to learn the rules of nature, while the first question is driven by a very healthy attitude to get things done by exploiting the rules of nature. The kids who used the three umbrellas for a wicket simply asked if they could find something in their environment to serve the purpose of a wicket. Quite subconsciously, these kids, by embedding in nature, by walking barefooted on mud, grass, and sand, have mirrored natural laws of nature in their brains, that provided them with the basis to change the utility of an umbrella to a stump of a wicket. Therefore, in my view, best innovators are those who are active outside the classroom as well as in the classroom and laboratories. 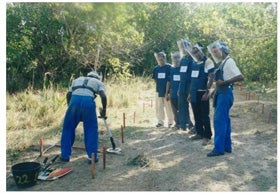 Parents and teachers may want to think deeper into how they can help their children to be great inventors and innovators. According to the authors of the book “Innovation, the Missing Dimension” (Harvard University Press), innovation underpins two opposite processes – rational problem solving and interpretation of ambiguity. I am sure, techniques to solve problems using rational thought is taught well in schools. However, courage to interpret ambiguity in total new ways is not practiced well in most classroom activities. For instance, the classroom is more poised to teach a student what an umbrella is, and how best you can use it to cover oneself from rain and sun. How interesting would it be if the teacher could ask the students to think of five other ways an umbrella can be used? It is the ambivalence created by such non-conventional questions that starts children to think outside the box.

Another very important quality one should develop is to have direct experience of the problem one tries to solve in its own context, before trying to innovate a solution. In the picture on the right, myself and my research students visited a demining site in Jaffna, Sri Lanka, before thinking of solutions to improve the process of demining. Wearing that protective gear in hot sun, I myself felt the fear, fatigue, and frustration of being very patient with the tools used for landmine detection and removal. Once we developed a full appreciation of the problem, and full respect for the people who do demining, our hard work back in a university laboratory was more rewarding and less frustrating. The direct exposure to the problem itself helped us to come up with ideas that are relevant to the context. 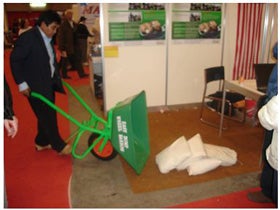 Surrounding culture too, influences an innovator’s mind. An innovator should be able to see gold on the flip side of dark experiences. A farmer I met outside Sri Lanka, got a back-ache due using a wheelbarrow to move soil. He did not stop farming, but thought of a better way to use the wheelbarrow. That gave him the idea to change the mechanism to the one shown on the right, where he can flip the bucket by pushing a lever using the foot, that reduces the strain on the back considerably. He became a rich man by selling this new idea. 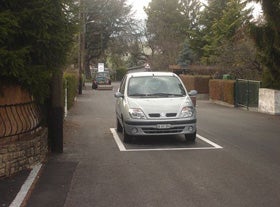 Innovators who have mastered the art of asking the question – “is there a better way to do this” – do not necessarily have to be in laboratories. They can serve well in the government too. On the left side, the way the block to park the car has drawn, gives room for pedestrians to pass on the safe side causing less traffic accidents on narrow roads. This kind of thinking cannot be taught in classrooms. It should come from the attitudes and practice for unique situations.

Finally, I want to reiterate that everybody is an innovator. A child, a farmer, a government officer, an even a university professor can be an innovator. It is the above mentioned essential set of qualities one should develop to be a productive innovative citizen. This is a very good article. Out-of-the-box-thinking, a degree of rule-breaking and different interpretation of ambiguity should be encouraged, recognized and rewarded.But do we, as a nation? No. I have been working for a state bank for 34 years now and indeed, I have devoted nearly 20 years of my time the bank for field work, for the purpose of mobilizing small savings and I know from my own experience that the systems in place are not conducive to that type of grassroots level interventions. I feel that we, as a country, should adopt the right mix of public banking, cooperative banking,green banking, conventional banking and micro-finance etc, of course, coupled with the right dose of regulation. For the financial services industry to make this a concrete reality,a visionary legislative intervention is a sine qua non.