Face to face with Country Director for India, Junaid Ahmad

The Lighthouse India is a platform to facilitate knowledge flows across states within India and to create strategic partnerships with other countries to share and transfer knowledge and experience, which would inform development policies, scale up good practices and innovations. We caught with our Country Director, Junaid Ahmad, for an in-depth understanding of this initiative of the World Bank.

What is Lighthouse India?

Development is best catalyzed when people learn by doing. The notion of lighthouse is that you are a beacon for someone. An Indian state innovating on how local government programs are run, say in West Bengal, can be a source of information for other states, say Madhya Pradesh or Karnataka, which are also trying to figure out how to strengthen local governments. In a federal system like India, the potential for learning from each other is vast especially where innovation is constantly happening. The problem is that the lessons from these innovations and the information about them is not moving smoothly across borders. Lighthouse India is based on the Bank's unique position to facilitate these exchanges and link them to actual implementation.

It is not only about exchanges between states in India. As India moves along the development trajectory towards high middle income, the nation itself is transforming. The lessons of this transformation are going to be critical for other countries. The Bank can also proactively broker these exchanges between India and other countries as India acts as a “lighthouse” for others.

It is important to stress that Lighthouse India is not just a passive exchange of best practices. It is an active exchange of practices and approaches where the expertise and experiences of India can be leveraged by another country. And as always, these exchanges are never one way: as India shares, it will gain from the development experiences of others.

Importantly, Lighthouse India will change the way we do analytical and advisory services.  The latter will be built around operational issues and offer the analysis to understand better implementation challenges.

How is Lighthouse India important for Bank’s strategy in engaging with India?

First, Lighthouse India is essential in supporting the strategy of scaling up development impact. Let me take the example of livelihood programs. We’ve been working in Andhra Pradesh, Bihar, Odisha supporting the creation of self-help groups of women and facilitating their access to micro credit and economic activities. We could respond to every state that requests our assistance for this kind of activity. On the other hand, if we have worked in three or four States, we can then leverage their expertise and experience to support others. In this context, the World Bank can act as a broker of exchanges where states learn from the experience of each other. And this could be in any area such as local government strengthening or in solar power generation.

Second, Lighthouse India will play an important role in the delivery of global goods. For example, in the case of climate change, if we support the collective efforts of nations to de-carbonize their growth path, we may be able to achieve the objectives set out in COP18 in Paris. India has set for itself the aspiration of delivering 175GW of renewable energy in the coming years. Not only will India’s energy strategy help in delivering the global goal of sustainable development, its experience with scaling up renewable energy and energy efficiency will support the collective efforts of other countries to achieve their own objectives in the energy sector. This is where Lighthouse India can play an important role of leveraging India in the achievement of global goods. 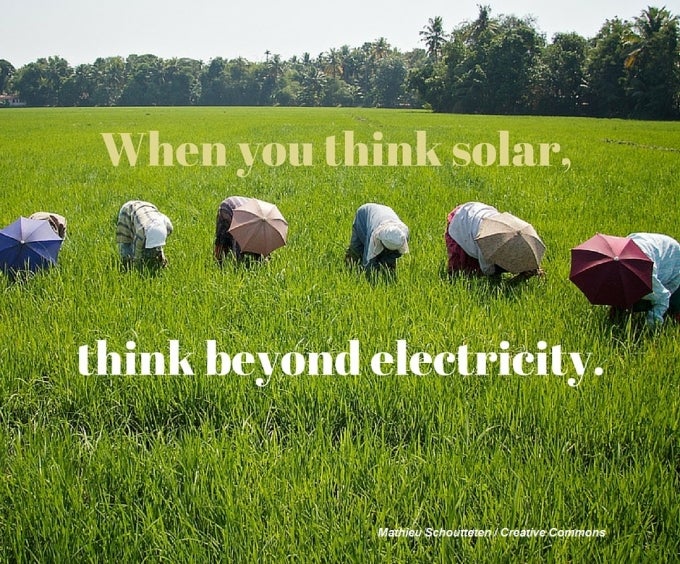 Can you share examples of how knowledge sharing under Lighthouse India will support sharing and learning from states?

There are several examples we can draw from. First, a group of African countries are very interested in understanding India’s experience in the skills-development area. How is India investing in skilling its workers? How does India leverage public private partnerships work around skilling? Several teams from Africa have already visited India and we are now talking of an active program of exchange.

Third, is an example from the energy sector. The Energy Efficiency Services Limited (EESL) of India is making a huge difference in promoting energy efficiency across the country. Saudi Arabia is creating an EESL of its own and are looking at India for expertise and experience.

These examples suggest a different approach to development assistance than before. They are based on the principle whereby one country or one state within a country will learn from the practices of each other and in the process also leverage each other’s expertise and experiences in shaping policies and service delivery. It builds on our experience with SouthSouth exchanges by following up the exchanges with active investment and expertise from the host country. The Bank will need to excel in becoming a broker of these exchanges and embed analytical and advisory services around them.

Question: How do you see Lighthouse India being implemented in the coming years?

We expect Lighthouse India to be implemented by ensuring that the exchanges are linked with operations. For example, in the skills area, we expect expertise from India to be leveraged to support operations in several African countries. Increasingly, we expect our Advisory Services and Analytics (ASA) to be determined by the programs embedded in Lighthouse India. Ultimately, Lighthouse India draws from the comparative advantage of the Bank: “knowledge in implementation.”

We expect Lighthouse India to be implemented by ensuring that the exchanges are linked with operations.
zalo download