How can ordinary citizens influence the quality of school education? 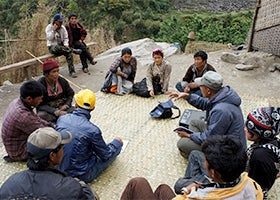 Increasing indulgence of school staff in party politics, lack of transparency in managing school budgets and a lack of accountability of teachers and school management to communities they work in – these are well known underlying reasons for poor quality of education and exclusion in rural areas of Nepal. But can local communities do anything to change the situation and to improve the quality of school education? YES, THEY CAN!

With the support of the Vijaya Development Resource Center (VDRC), 21 community schools scattered around mid-hill (inner Terai and Madhesh regions of Nawalparasi district) introduced the Community Score Card into their schools. This is a simple social accountability tool which allows parents and students to be involved in assessing school performance and establishing constructive dialogue with schools on required improvements.

School management has become more responsive. Student and parent priorities are now more strongly reflected in the School Investment Plans made by the School Management Committees, and Parents and Teachers Associations have become more regular and constructive and are less prone to mutual accusations and misunderstandings.

Schools’ budgets have become demystified. In several schools parents had for some time suspected funds embezzlement by teachers; this was linked to parents’ ignorance of schools’ sources of income, the rationale of scholarship distribution and of extra fees charged to students (especially when students under 8 grade that are supposed to get free education). There was also lack of awareness about school expenditure, including teachers’ salaries and allowances, actual investments in school physical infrastructure and improving ambience. In the past, “misunderstandings” around budget issues led to parents in some instances refusing to send their kids to school.

Communities have become engaged in solving school’s problems and mobilizing extra resources. By gaining access to school budgets, communities also understood existing constraints and were more willing to contribute their own funds towards critical improvements. Communities living around Shree Shiva school decided to collect contributions in cash and kind by singing ‘Deusi’ songs individually and in groups (a time honored tradition of raising funds for social work during Tihar, one of Nepal’s most significant festivals that falls in November). The contributions were spent for procuring sports materials.

The students' learning needs have been addressed by organizing extra classes for academically under-performing children. This has made parents less reliant on external tutors (a practice that was always accessible for better off families) by more systematic checking of students' homework and by providing parents with feedback.

The students are getting more involved in keeping their classrooms and school premises clean. In Shree Saraswoti school children launched a campaign against smoking within school premises and in Shree Loksewa school students and parents found a solution to unbearable heat in the school by insulating the roof.

Ultimately, the Community Score Card turned out to be a WIN-WIN solution, despite the initial reluctance of schools to accept this participatory method. The District Education Office and its Resource Centers in Nawalparasi district are now keen to maintain CSC and replicate them throughout the district.

“CSC should be applied in all community schools of the district and all over the country, if the present education system is to be changed. This will help to reduce the difference in schooling quality between poor children and children whose parents can afford expensive private schools”, says Ritu Kumal, a mother of two girls who had to interrupt her post-school education because of her marriage and who now hopes for a good education for her daughters.

However, the long-term success of the CSC may depend on the extent to which schooling quality assessment by parents and children are taken in into account by education authorities when judging the performance of school teachers and managers. Nil Kamal Giri, a grade 8 student, says: “Earlier wild elephants used to run away with the beating of the drums, but nowadays they are not even scared of the loud noise from the firecrackers. In the same manner, the headmaster and teachers got a bit scared in the beginning when the parents and students discussed their weaknesses. But if no punitive action is taken, they may care least about the results of the score card in the future”.

The CSC initiative was supported by the PRAN program of the World Bank in Nepal which promotes the use of various tools allowing citizens to hold the government and service providers accountable.
Topics
Education
Countries
Nepal
Regions
South Asia Interesting finding and can replicate systematically with support mechanism required in the beginning. Congrats to World Bank and also the VDRC. Also would like to know more about Community Score Card that is proved to be effective for the improvements.

It is indeed a very good case of community participation in improving service delivery. There is a paradigm shift in the engagement of community in development programmes from users to choosers. The world should shift to more community centric development decision making for better and improved service delivery. Citizen as clients should be empowered to establish the short route of accountability among the service provider.

It is always delightful to read about positive changes in our community. However, as pointed out in the conclusion, I think the authorities or the community should develop ways to sustain this change and keep it effective throughout.