In Sri Lanka, as in the rest of South Asia, improving agricultural production has long been a priority to achieve food security.

But growing more crops has hardly lessened the plight of malnutrition.

Chronic malnutrition remains prevalent across the region as many poor South Asians cannot afford nutritious foods or don’t have the relevant information or education to make smart dietary choices.
And children and the poorest are particularly at risk.

South Asia is home to about 62 million of the world’s 155 million children considered as stunted-- or too short for their age.

And more than half of the world’s 52 million children identified as wasted—or too thin for their height—live in South Asia.

Moderate-to-severe stunting rates ranged from 17 percent in Sri Lanka in 2016 to a high 45 percent in Pakistan in 2012–13, with rates above 30 percent for most countries in the region.

Moderate-to-severe wasting rates ranged from 2 percent in Bhutan in 2015 to 21 percent in India in 2015–16, with rates above 10 percent for most countries in the region.

The social and economic cost of malnutrition is substantial, linked to impaired cognitive development, chronic disease, and lower future earnings.

And sadly, much remains to be done to ensure children across South Asia can access the nutritious foods they need to live healthy lives.

The World Health Organization’s global targets for 2025 aims to reduce the number of stunted children by 40 percent and curb the child wasting rate to less than 5 percent.

Bangladesh and India have seen modest average declines in stunting of 1 percent per year. Pakistan and Sri Lanka have experienced no decline.

Equally alarming, all South Asian countries are predicted to be off course in reducing wasting.

What’s striking about South Asia—and unique compared to the rest of the developing world—is how stubborn chronic malnutrition remains despite high economic growth.

What explains this disconnect?

The first hypothesis is that governments do not commit enough to improve food, water, sanitation, care, and health services that can help improve nutrition outcomes amid disadvantaged populations.

On the demand side, poor families usually underinvest in nutritious foods due to cost, nonmonetary constraints, or traditional beliefs and preferences.

To find solutions and stimulate behavioral changes for better nutrition, the World Bank’s South Asia Food and Nutrition Security Initiative (SAFANSI) will gather this week experts on food systems and nutrition, international donors and civil society at a regional roundtable in Colombo. 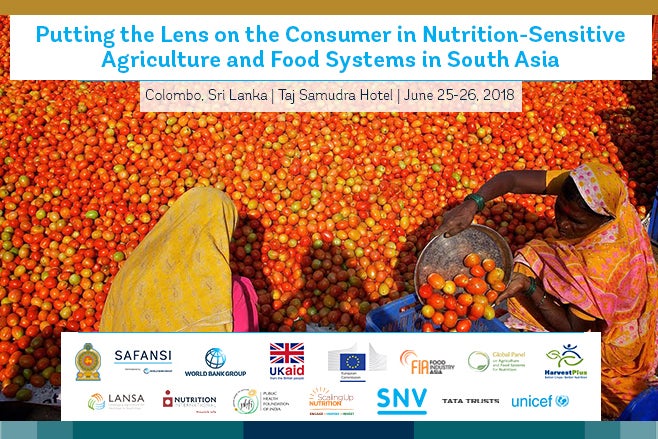 The event will discuss how consumers interact with food systems, how markets affect their dietary preferences and consumption, and how government policies can enable or distort nutrition-sensitive food markets.

Later this year, the World Bank will publish the flagship report Ending Malnutrition in South Asia that examines the underlying factors behind South Asia’s high levels of undernutrition as well as slow progress in reducing undernutrition.

This study will also put forth recommendations to design policies and actions to address undernutrition.

This effort will require a multi-pronged approach as inadequate dietary intake depends on improving aggravating circumstances in water and sanitation, education, economic livelihoods, agriculture and food, and the status of women.

So far, South Asian governments have yet to effectively tackle the immense burden of undernutrition.

To be true, government and the private sector can—and should—help meet the demand for more nutritious foods.

But ultimately, consumers’ tastes and dietary choices will drive the demand for better foods.

As such, equipping individuals with the information they need to make good food choices and adopt healthier behaviors will have a more lasting impact.

Fittingly, this week’s timely roundtable Putting the Lens on the Consumer will provide the knowledge, resources, and tools needed to pave the way for optimum nutrition for all South Asians. I am a medical doctor based in Ethiopia. During my practice, I have seen a lot of malnourished and stunted children coming from middle income families. Lack of information about nutritious food takes major part of the problem. Information is crucial.
I would love to get the way forward from the round table discuss and I believe it will be useful.
Thank you

Greetings sir, I wish to implement a groundnut, oats, and honey snack for Africa and Asia. It will have the same nutritional value as Plentynut Butter that the UN uses to treat malnutrition. Can you assist me sir?

So much has been written about this topic and yet it continues to be a problem. Sadly, those affected communities already consider their present state as the "normal" and unless their own governments do not have the political will to help alleviate these conditions, then we will continue to witness the cycle go on forever. There are countless young boys and girls in Asia who suffer under the crushing burden of generational abject poverty. Please pray for GFA-supported Bridge of Hope centers, which are helping to demonstrate the love of Christ and to point the children to a new life.

There are many people that write about malnutrition and yet it continues to be a serious problem. This problem must be treated. It happens in many countries, like countries in South America or in Africa. I believe that different organizations, for example UNESCO, should help countries that have many people with malnutrition. In addition, governments should invest more money in malnutrition, because it is a very serious problem and we must help to reduce it. People must begin to have a healthier diet to be able to solve malnutrition and governments should motivate people to eat better and healthy. They can do this, for example, reducing the prices of fruits or foods without high levels of fat. It is true that malnutrition can cause many problems like diabetes or growing problems and has as consequence a reduction of our ability to lead an enjoyable life. However, malnutrition is not the only responsible for these health problems. Another responsible for growing problems could be a familial short stature or hormonal diseases. So it is important to recognize that growing problems are not only caused by malnutrition. I hope that the governments and organizations take measures about malnutrition and not only talk and discuss about this topic and that they help these counties before it is too late.