'This is our house now' 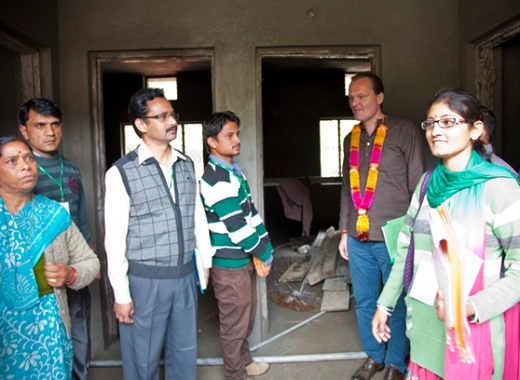 “This is unit number 95”, Preeti told me. “It is the standard model.” Geeta Devi the owner shook her head. “Look up”, she said, “This is our house.” I looked up and saw what she meant: there was a beautiful lotus flower design in the ceiling. “My husband made it” Geeta said proudly. “This is our house”. 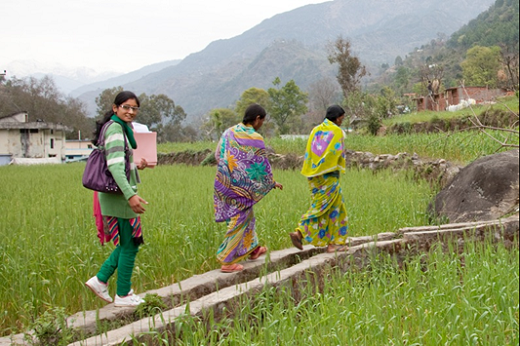 Preeti Bisht is the community worker for SUDHA who is mobilizing the victims of the Uttarakhand floods in this small village on the Mandakini River, well on the way to Kedarnath. She took me all the way to unit number 107 and in passing showed me the school. I soon discovered that none of the house units were standard. Some people added a room, others an extra window in the kitchen to show the amazing view up river. And the houses that were already finished were painted in every color imaginable as houses in Uttarakhand are meant to be.

All of them, however, are certified by geologists to be on parcels safe from floods and landslides in the future, and they are all earthquake resistant. That is the benefit of the “standard design”. 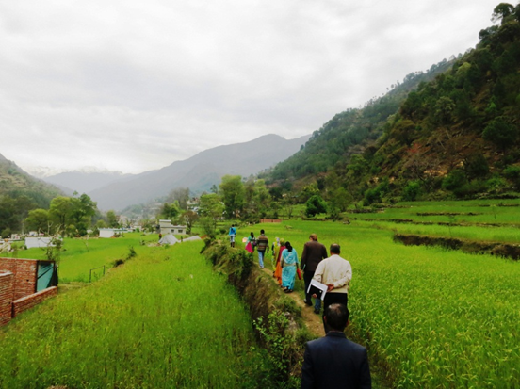 Visiting Gabni Gaon to see how villagers who lost their houses in the floods are building newer, safer homes for themselves.  (Photo: Sona Thakur)

When we had been talking with the team in the Uttarakhand State Disaster Management Authority (USDMA) in August of 2013, it was not meant to be this way. With so many people homeless, we were all feeling tremendous pressure to build houses quickly. We were trying to see how we could quickly procure pre-fab houses. It seemed the only solution. We looked at models of the pre-fab houses and felt this was the way to go.

So the USDMA team started work on procuring the houses quickly, while the social mobilization team was preparing an information and consultation session for affected people. That session changed everything: when the housing component was discussed, it turned out nobody wanted the pre-fab houses. People took one look at the models and thought they looked ugly and flimsy. I even had civil society representatives from the state visit me in Delhi to tell me people would not want the pre-fab houses. They did not look like anybody’s house.

Often when something like this happens, the pressure to achieve results might force the team to ignore the feedback and press ahead. Not this time: the Government of Uttarakhand decided to do a survey of beneficiaries and publish the results on the project website. The results were as clear as the water in the Mandakini River: nobody wanted pre-fab. That is when it was decided to hire mobilizers like Preeti, to help people build their own houses.

At unit 103, Preeti stopped to chat with an old lady standing in the field in front of her new house.  She had been the first to move in.  “What do you think of your new house”, I asked her.  “It is the same color as our old house,” she said with a faint smile.  “I miss our house. “  She pointed down the hill where there is a gaping hole in the village, actually looking pretty much like the riverbed itself.  We chatted some more and then started leaving.  “It is good” she said by way of farewell.  “This is our house now…” 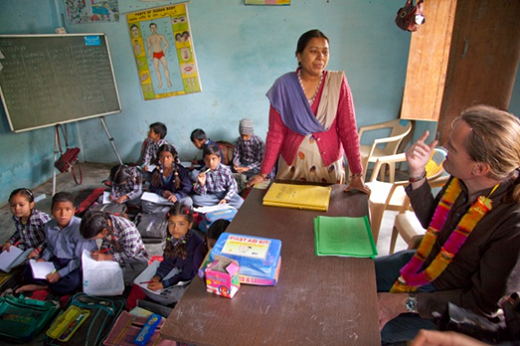 Children from three grades huddle together in one classroom after their school building was swept away in the floods (Photo: Martje van der Heide) 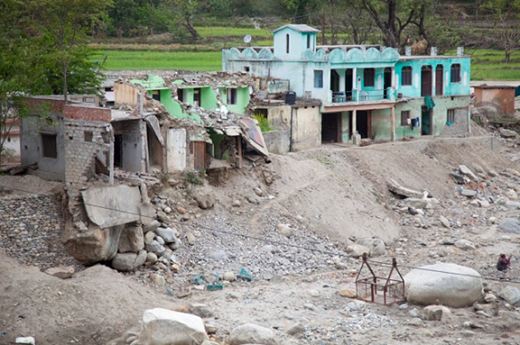 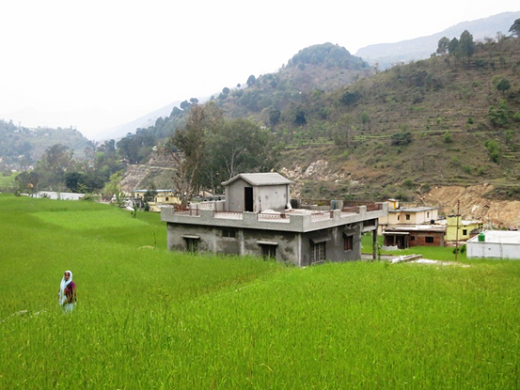 Yashoda Devi with her new house built far back from the flood line (Photo: Sona Thakur) Did it bring any lesson to any empowered body.

Thanks for asking that question. It did clearly bring a lesson to the Government of Uttarakhand and USDMA. In addition, it brought a lesson to the World Bank's Disaster Management team. So hopefully this will influence future projects!

Good Job Preeti , Proud of you !
Let these new houses bring a new hope in their lives.
-Celin
http://www.theasianconnectionsnewspaper.com/

Thanku sir it's my pleasure

What a touching story! I hope they enjoy their 'new house' now.