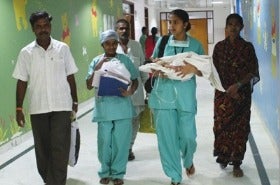 You might not think of health insurance as a suspenseful subject, but a recently released book on the subject proves different. As such, there is one missing entry on the back cover, describing the book "Government-Sponsored Health Insurance in India: Are You Covered?" by authors Gerard La Forgia and Somil Nagpal. Perhaps something like “The authors play with their readers’ nerves as they drill deeper and deeper into the mysterious workings of health insurance programs in India. Slowly a multi-faceted picture emerges, which the authors skillfully bring to bustling life, not least by adding fiscal and political economy spice throughout.”

Like many countries, India is struggling to provide its people with universal health coverage. The majority of Indians remain irregularly and incompletely covered. La Forgia and Nagpal unravel the layers of contextual factors and operational features which have helped a new generation of government-sponsored health insurance programs to bring hundreds of millions of Indians under some form of health insurance coverage, all within a span of four years.

Though focused primarily on inpatient care, these programs have made it possible for bottom-of-the-pyramid beneficiaries to use any public or private hospital on the programs. They can obtain even complex care such as heart valve surgeries, neurological procedures, and cancer treatment on a cashless basis, often processed using paperless IT systems, something that would have been inconceivable a few years earlier.

India has taken an unusual, bottom-up approach in starting with coverage for the poorest beneficiaries first. In addition, the programs have been able to purchase services from the private sector at an unprecedented scale. The early signs of public-sector responses to the additional financing and incentive structures offered by these programs which are emerging in states such as Kerala hold the potential for a promising foundation for the country’s health system and for increased public investments therein.

However, the story has its twists and turns, and the programs have their fair share of challenges to address – for instance, the scope of coverage, which does not include ambulatory care, the need to strengthen linkages with the public health system, the importance of leveraging their volumes in improving provider management and quality of care, and their pressing need to invest resources in monitoring and evaluation.

India’s experience will certainly be relevant and significant for other countries similarly struggling with the issue of extending health coverage. We are delighted to be witnesses as well as contributors as the story unfolds.

This book, based on razor-sharp analyses throughout, is a compendium of everything you ever wanted to know about publicly funded health insurance in India.

Read it for yourself: Click here for the free online e-book. dear jesko, it was very heartening to read your blog, even after discounting for your natural optimism :). is this effort being supported by the biometric UID scheme launched recently? It would be interesting to hear more about how the health services are delivered without cash payment, how they monitor the service delivery, etc. I am interested in this because, during the upcoming SDN days, we plan on looking at how IT/innovative solutions have been used for service delivery, so as to see if these can be replicated in the electricity sector.

Separately, did you have a chance to look at one of the episodes of Satyamev Jayate, which focused on the state of health services in India? That was very sobering, but probably wasnt representative of the entire health sector there.

Keep writing! So good to read your blog.