In recent years, there has been growing demand by cities to create viable public spaces within and for slums. Cities recognize the multitude of benefits that public spaces provide including: Literature from various think tanks such as Project for Public Spaces and ARCHIVE Global suggest that including public spaces in the design of urban policies and programs can act as a catalyst for slum upgrading in developing countries. At the same time, slums or informal communities must be recognized as a valid and unique form of urban growth and development. It is desired that formal planning and design services develop these urban areas over time into places of higher quality living.

Unlike most public spaces in developed countries, growth and development patterns in slums are entirely different. Adopted from workshop proceedings of the United Nations Conference on Housing and Sustainable Urban Development, the maps below present how the use and accessibility of public space vary between formal and informal parts of a city: 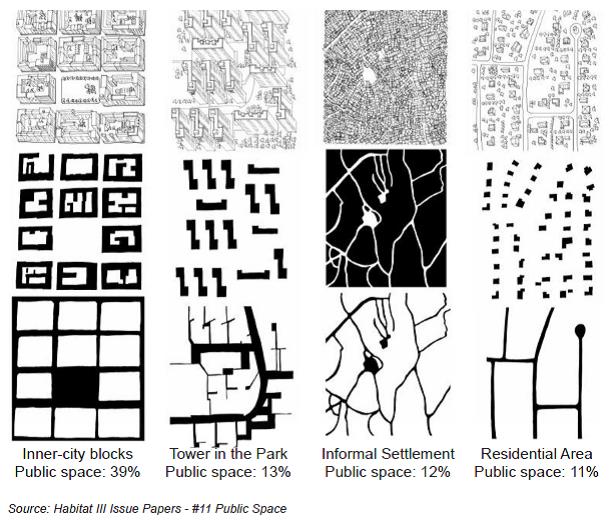 For instance, informal settlements comprise of individual land appropriations and occupations followed by an incremental manner of building. This is typically done by residents, households or landlords instead of more experienced developers. Moreover, slums are characterized by their informal tenure and are described as mostly "autonomous, illegal, irregular, marginal, spontaneous, uncontrolled and unplanned.”  Although the amount of public space (12%) is comparable to those in organized residential areas (11%) or condominium buildings (13%), development is compact – resulting in high densities and narrow, winding streets (if any), corridors or pathways. There appears to be limited accessibility and an insufficient amount of open space relative to the number of residents in a given area.

Public spaces in developing countries also differ in function. They tend to be multi-layered, multidimensional entities as opposed to clearly defined zones or land uses. They serve as pathways for public transport, water supply, electricity, drainage and street lighting; venues for informal trade and commerce such as hawking and street vending; centers of religious and cultural exchange, recreation and social interaction; and are an extension of various household activities such as washing, cooking and sleeping. Not having a space that meets residents’ economic, communal and recreational needs could exacerbate the living conditions of slums and cause them to illegally encroach into privatized spaces.

Despite ongoing research of the value of public spaces, cities in developing countries continue to rely on upgrading schemes that are oversimplified, short-term and cheap. Local officials are concerned mostly with providing the bare necessities - infrastructure for water, transport, solid waste disposal and electricity, among others. But the reality is that slum communities are complex and integral to the urbanization process. And through public spaces such as streets, parks, waterfronts, markets and plazas, they play a pivotal role in the physical integration, connectivity and spatial inclusion of slums into formal systems of planning and urban governance. Over time, slums should be transformed into consolidated neighborhoods with better access to streets, services and public spaces.

To help guide local officials in the efficient and effective design of public spaces, some principles adopted from the UN-Habitat’s Streets as Tools for Urban Transformation in Slums include: 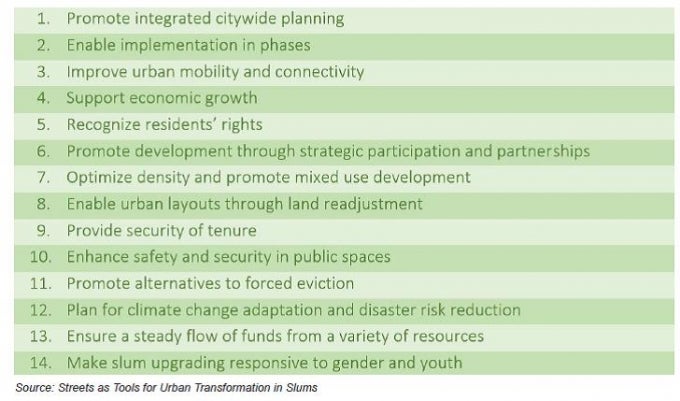 Thus, it can be argued that comprehensive thinking, design and planning of public spaces in slums help address city management issues, and contribute to community development and an improved quality of life. This link between public spaces and slums should not be overlooked in the development context as spaces overall have the inherent capacity to reshape the built environment and integrate slums into the larger urban fabric. Public spaces form an important aspect of a city's livability with spaces exclusive for leisure and recreational activities. Unfortunately most cities in Africa have inadvertently not planned for these spaces. The situation is worse in slums and urban areas where people with low incomes live