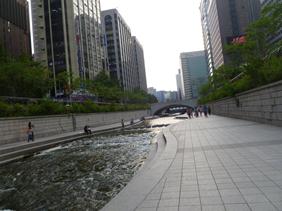 Last week a group of Bank staff joined our clients from the South Asia region for an Urbanization Knowledge Platform event on green cities. The event was held in Seoul and Daegu, respectively the largest and third-largest cities in Korea. It was hosted by the Korea Research Institute for Human Settlements (KRIHS), Korea’s premier institute responsible for urban, regional, infrastructure, land, and housing planning and research. The idea was for clients and Bank staff to learn firsthand about green city development as it happens on the ground in Korea. The following are my six takeaways from the workshops and field visits during the week.

Green growth is much more than greenhouse gas reduction. Soogil Yang, chairman of Korea’s Presidential Committee for Green Growth, in his keynote presentation for the workshop, highlighted 10 key agenda items of Korea's Green Growth Strategy. Of course "efficient reduction of GHGs" is part of it, but it is only one out of 10. Other key areas include: adapting to climate change, improving energy security, greening industries, developing green technologies, reforming the market system for green economy, green realignment of the land and transportation, green life-style revolution, and leadership for global green growth. In summary, Green Growth is embedded in a broader national growth strategy, and the green growth strategy is the national economic strategy.

Cities need to continuously update themselves. Our host city, Daegu, is a great example. It used to be famous for its textile industry, but textile moved away when China opened up. Daegu quickly adjusted to develop its machinery industry cluster, building on its original machinery manufacturing for the textile industry. From machinery, it moved on to auto parts and other industrial sectors with higher value added. It developed its capacity to provide parts, components, and human resources to the multinational firms located nearby, such as LG, Samsung, and POSCO. The efforts in Green Growth Initiative over the last decade are part of the strategy to upgrade the city to meet new economic needs such as information technology and medical clusters. “Green” and competitiveness are becoming closely linked.

The color of green cities is green. With so much emphasis on greenhouse gas reduction, the term “green city” often is used metaphorically to refer to a low-carbon city. Most of the efficient measures to reduce GHG, such as reduced car use, energy efficiency improvement, and waste reduction, do not necessarily lead to a "greener" city. From the examples in Korea, however, all the "green cities" really did earn their name, and well deserve to literally be called green! Daegu, for example, spent more than $600 million since 1995 to plant 23 million trees in the city. While in 1997 the city had only 23 parks, now it boasts 80. To create green space, the city tore down 28.4 kilometers of walls on 639 sites, and planted trees along 487 streets for a total of 1,143 kilometers. An old landfill sites was turned into an arboretum, which 1.7 million visitors enjoy each year.

Water often is the center of a green city. The mayor of Daegu proudly recalled how the city managed to clean up the highly polluted main river that flows through the city, the Geumho River. While the BOD level was 111 mg/l in 1984, it was reduced to 2.7 mg/l in 2006. But the importance of water to a green city goes beyond a clean river. Park space created along the river has become a center of human interactions, making the city much more vibrant. The restoration of Oncheon River in Pusan, Korea's second largest city, involved removing a concrete bed and restoring the natural river line, securing the river from flooding, and installing facilities for people to enjoy of the river.

Garbage can turn "green." Many of us were amazed to see that Daegu’s vast landfill, which absorbs 300 truckloads of domestic waste a day, is clean, orderly, and hardly has any odor. It was indeed very pleasant to walk around it. Leachate (liquid drained from the landfill) is stored under a large soccer field. A gas-to-energy facility sends landfill gas to the municipal heating system, generates electricity, and takes away half a million tons of CO2 emission each year.

Green is for people. The remarkable transformation of the Cheong Gye Cheon Stream at the heart of Korea's capital epitomizes Korea's urban development trajectory over the last century. While the stream was a place for washing and bathing during the early 20th century, it became polluted and its banks were densely occupied by urban squatters by the 1960s. By 1976, the government resettled the squatters, covered the creek, and constructed an elevated highway above it, which carried 170,000 vehicles a day. Over time, congestion worsened, and the city's center was divided by the highway. From 2003 to 2008, Seoul implemented a project to tear down the highway and restore the stream with flowing water. A great public space was created where people gathered and walked, the businesses nearby thrived, and the city is no longer spatially divided by the highway. An elevated highway has been transformed into a haven of natural beauty amid the bustle of city life, and the new Cheong Gye Cheon became an instant landmark of the city. The success of the project shows the importance of putting people at the center of urban development efforts, and the close synergy between ecological restoration and quality-of-life improvements.