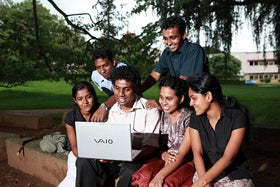 Join an online discussion with Ismail on Tuesday, April 2nd at 8-11AM on the World Bank's South Asia Facebook page to ask questions and learn more about his experiences.

The Dalai Lama once said - that if you ever feel you are too small to make a difference then try sleeping in a room with a mosquito. And the same goes for business. Every big business starts as a small business. General Electric was at one time the world's biggest company and it started with a simple but revolutionary idea - the invention of the incandescent light bulb in 1878 and the vision of just one person Thomas Edison.

Walmart started with a single store in 1945 and is now the largest private employer in the world. Starting with one store and the idea of making lots of cheap goods available all over the US, Walmart has created more than 2 million jobs. And of course more recently we have lots of examples in the technology and innovation space Apple, Microsoft, Google, Amazon, Ebay, Dell and Facebook. All are multi-billion dollar companies that started out in a single room, a basement or garage with a simple idea shared at first by a one or two people.

Sri Lanka's successful IT companies are no different, Virtusa, Millennium and others also started out small and went on to multi-million dollar valuations and listings on global stock exchanges. Why shouldn't the next facebook or the next Google come from Sri Lanka? Sri Lankans have access to the same resources over the internet. You can reach just as many customers, link to investor networks, exchange ideas with those in the industry and seek feedback from mentors and competitors alike.

Sometimes great companies are not always the innovators or first movers. Sometimes great companies can be formed by taking an idea from one place and adapting it to another - just like Baidu is the Chinese Google or Alibaba is the Chinese Amazon / Ebay. Are there ideas outside that are just waiting for someone like you to adapt and roll out in Sri Lanka? As Thomas Friedman says the world is flat - there is a level playing field nowadays. If you have a good idea and the inspiration, persistence and ingenuity to make it happen, chances are you can make it succeed.

Perhaps you can be the catalyst for change in your society. In other countries, I've seen young people take charge of their surroundings and organize hackathons. group of 100 young programmers get together on a Friday evening and pitch ideas to each other - taking it in turns and taking just 90 seconds each to explain their idea. At the end of the session the best 10 ideas are chosen to go forward and those that are not successful in selling their own ideas join the other groups. Over the weekend the groups work feverishly on their ideas until they are presented on Sunday evening to an external panel of investors. And the best ideas can receive funding and develop into commercial or not-for-profit ventures.

I've been amazed to see what can be done with enthusiasm, skill and talent in a short space of time. I've also been amazed at how socially conscious today's youth are -many are as motivated or even more motivated by making a change in their societies as they are by making money. And there is no reason why the two cannot go hand in hand. You can only make money if you create something that is useful to society - and that creates jobs and value for others along the way. And I am seeing more and more that those that are wealthy are those that have the time and vision for philanthropy. Think about the $100m that Mark Zuckerberg donated to education or the great works of the Gates Foundation and the challenges that they have funded.

Interested in being an innovator? Apply for a Youth Solutions grant! " I long to accomplish a great and noble tasks, but it is my chief duty to accomplish humble tasks as though they were great and noble. The world is moved along, not only by the mighty shoves of its heroes, but also by the aggregate of the tiny pushes of each honest worker." --Helen Keller