Wanted: Photos Highlighting the Diversity and Dynamism of Microfinance! 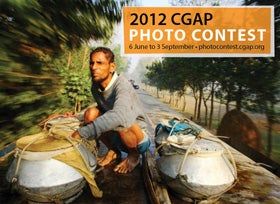 On June 6th, CGAP launched its annual and ever-growing photo contest that highlights the diversity and dynamism of microfinance around the world. Each year, the CGAP Photo Contest receives stunning photographs from around the world that help tell the story that CGAP’s work addresses.

Now in its 7th year, CGAP has asked entrants to focus on the broader issues that surround financial inclusion to help show the variety of formal and informal ways in which finance is woven into the fabric of poor people’s day-to-day activities. CGAP is continually trying to build upon the Contest’s success by challenging photographers to use their imaginations to capture microfinance in distinctive ways and diversify the representations of microfinance. In particular, photographers from South Asia that have consistently dominated the top prizes will need to continue wowing the judges for place as a finalist as more and more photographers from Sub-Saharan Africa, Latin America, and the Middle East deliver compelling work.

From the start, a defining feature of the Contest has been that it provides opportunities for people from an array of backgrounds. The Contest is open to anyone with a camera at least 18 years of age, both amateur and professional photographers, and each year the finalists have shown to be a mix of both.

Winning photographers have the chance to use the prizes and considerable exposure they receive to achieve personal goals. Mohammad Rakibul Hasan, the 2010 winner from Bangladesh, says he has received several commissions from international organizations as a result of the exposure he has gained from participating in the Contest. Hasan was a finalist in the Contest for several years before winning the top prize. Over the course of entering, he even received his post graduate diploma in photojournalism from Ateneo de Manila University in the Philippines. As one of the Contest’s most successful entrants, Hasan will be joining four other judges on the panel for this year’s judging process taking place in Washington. Photographs submitted are judged on their composition and technical strength, but the narrative of microfinance that an image can illustrate is what makes for a winning photograph. Many steps have taken to eradicate poverty in India. But still it persists, the reasons are many. Poverty has to be defined properly in today's context. Once who were socially, economically oppressed have reached a level now and are enjoying a good status with economic liberty. But those who were socially forward in thepast are facing lot of problems in economic situation. They are finding it difficulty to meet the ends. policies have to be changed to bring an equal opportunity on the basis of economy rather than social measurement. India has already reached a stage wherein which it has to look into some drastic changes which are very essential to bring in new life and development. If this is not done, the agony, frustration and dilemma which is haunting in the minds of the people would come out on one day and may emerge as a strong opposition in the coutnry's development.