What Women Can Bring to the Asian Century 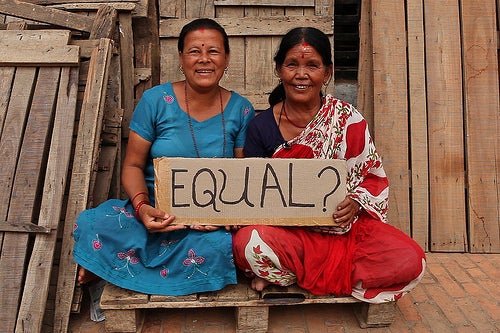 Today we celebrate International Women’s day. Like every year, hundreds of events will happen worldwide to highlight the importance of rebalancing the global gender equality and integrating women in economic, development and peace processes. We will probably read or hear the phrase “women’s empowerment” many times, but tomorrow, people will refocus naturally on other day to day issues, as there is still concern about the effects of the financial crises, its impact on people’s pockets and the lack of employment for new generations.

It is true that South Asia navigated the financial crisis better than most regions and that over the last two decades it has experienced a long period of robust economic growth, averaging 6 percent a year. The idea that the world has entered the Asian Century is now becoming a reality and some countries in the region are working hard to become global leaders and getting ready to give the world economy a big boost. But if South Asia wants this boom to happen, the region needs to go far beyond today’s celebration to bring women on board now: women are a key force to shape the region’s future.

A stronger and dynamic South Asia will only be possible with integration of women in the development formula. Gender equity is not only a core development objective in its own right but also smart economics, enhancing productivity and improving prospects for the next generation and bringing the feminine perspective to the table can really make a difference. Poverty can be reduced by empowering women in their communities to find their own answers, organically grown to solve problems as they emerge. Feminine leadership is needed so the poor can find development solutions that have meaning for them and are allowed the time that it will take to get there. On conflict, women bring a point of view that doesn’t see a war as something to be won, but as a cause of death and suffering for everyone, so the feminine is a strong force for peace.

Unfortunately South Asia —that includes the culturally rich and diverse countries of Afghanistan, Bangladesh, Bhutan, India, the Maldives, Nepal, Pakistan and Sri Lanka— is at the bottom of the global ranking of gender inequality. This index includes five indicators: maternal mortality, adolescent fertility, parliamentary representation, education and labor force participation. Some numbers are striking: 290 women out of 100,000 die during child birth —a number only exceeded in sub-Saharan Africa— and millions of girls simply go missing through sex selective abortions.

The region is home to the largest population of young people in the world and half of those are young women. In order to take full advantage of the South Asia's youth potential, women need to have the skills that will allow them to leverage the opportunities that are available in an increasingly global market. More and better jobs are needed to capitalize on the region’s demographic dividend and to close the earning and productivity gaps between men and women.

Girls and young women in particular face significant challenges as they grow into adulthood. Many of them can’t reach their full potential because they get married when they are too young. Half of the world’s child brides live in South Asia, which has serious consequences: girls who get married at a young age are less likely to attend school and more likely to be a victim of domestic violence. Violence against women is widespread and often socially accepted. Over half of adolescents think that a husband is justified in hitting or beating his wife.

The Asian Century will only become a reality if South Asia welcomes growth that reduces gender gaps in health and education and ensures women voices are listened and taken into account. We need to work together to economically empower women. Gender equality will benefit all. It is not only a matter of fairness, but it is relevant to generate and ensure economic growth.

The World Bank and its partners are making gender equality a priority for our engagement in the region. We are working towards improving the lives of women and girls and much progress has been achieved. We all know what needs to be done to help the women and girls of South Asia lead a life of dignity and prosperity. Let us all join hands together to improve the lives of girls and to help young women achieve the future they deserve. They will give back to their country and to the region many more times than what they receive.