The energy future, as seen from Denmark 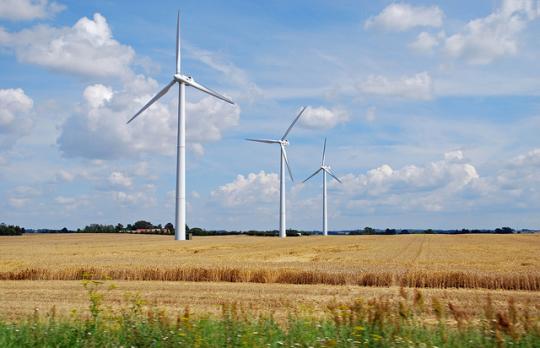 Driving across the Danish countryside, they cannot be missed: towering white wind turbines as far as the eye can see, their slow-turning blades providing a 21st century counterpoint against the flat landscape of fields and farmhouses.

Denmark has committed to renewable energy further and faster than any country in Europe.  The Scandinavian nation generates a third of its annual electricity demand from wind, and solar capacity is growing as well. For countries that want to green their energy mix, there is no better place to get a glimpse of the future than Denmark.

Its pioneering spirit has brought great benefits, and international acclaim, but like all first movers, Denmark is also learning as it goes.

In visiting Energinet.dk, it became instantly clear that running an electricity grid largely off renewable sources is much more complex than simply dotting the landscape with wind turbines or solar panels.

For one thing it requires a delicate regulatory balance.  Denmark’s electricity market is "unbundled"—meaning that generation, transmission and distribution are in the hands of different operators.  And there is open access to the grid—a level playing field for generation companies that want to sell electricity into the system.

However, long-term planning and transmission operation is kept in the hands of Energinet.dk and other non-profit entities that operate under a mandate to work in the interest of electricity consumers and society as a whole. There are incentives for renewable energy generation, but new solar and wind projects must go through a rigorous vetting process to ensure they are properly located and built out to make the overall system stronger and more reliable.

The net result is an electricity sector that fosters competition, prioritizes clean energy, and meets long-term demand while keeping costs down.

“You need to have a strong commitment from government and good long-term planning,” said Peter Jørgensen, Vice President for International Relations at Energinet.dk. “All parties need to be coordinated to ensure the grid is built out correctly.”

Denmark also enjoys the great advantage of having built electricity system interconnectors with neighboring countries decades ago, which in combination with an efficient regional electricity market gives the overall system enormous flexibility. Norway—with its huge hydropower and storage capacity—can import and export electricity whenever Denmark has a surplus or is running at a deficit.

Such advantages are hard to replicate, but that does not mean that transitioning to an electricity grid powered to a large extent by solar and wind is out of reach, even for developing countries.  A new ESMAP report, Bringing Variable Renewable Energy Up to Scale, makes clear that with the right planning, policies, and investments, countries can now integrate wind and solar into their power grids at higher levels than previously thought possible. Such investments would include complementary systems such as demand response, reservoir hydro, and energy storage and natural gas-fired power plants to provide on-demand power.

One of the most heartening aspects of the visit to Energinet.dk was that participants clearly saw Denmark’s sophisticated integration and large-scale use of renewable energy as a model with lessons for their countries, not as an anomaly or an experience that could only be replicated by rich countries.  Questions were detailed and specific, covering Denmark’s grid code, how independent power producers are compensated, and price mechanisms in the regional spot market for electricity.

If it continues along its present trajectory, Denmark will continue to be seen as a model for the transition to clean energy by developed and developing countries alike.  The government has set a national goal of ending domestic dependence on fossil fuels by 2050.  What this means, among other things, is that wind and solar power will be harnessed in a massive effort to convert biomass into transport fuels.  This would be an unprecedented approach, and full of risks. But whatever happens, the world will be watching closely, and benefiting from Denmark’s experience.
Topics
Energy
Environment
Countries
Chile
China
Denmark
Morocco
Norway
Pakistan
South Africa
Zambia
Regions
Africa
East Asia and Pacific
Europe and Central Asia
Latin America & Caribbean
Middle East and North Africa
South Asia
The World Region very interesting to observe. Denmark is one country with a level of prosperity and modernity are very stable. Average economic conditions people are predicted to survive in a wide range of economic issues, making Denmark as one of the eligible countries as bases in the development of energy. I do not know much, but by reading your post, I'm sure, what is done by Denmark is a step forward. thanks for the post. Visit us: http://www.gaslicht.com/energievergelijken