Extractive Industries Can Work for the Poor 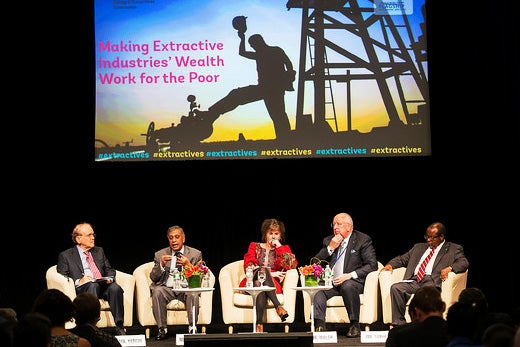 Everyone agrees that enhanced transparency—on payments, revenues, royalties and taxes—is essential to success in developing countries to turn earnings from oil, gas and mining into economic growth and poverty reduction. But that’s just the first step.

That was one takeaway message from an Oct. 8 panel of leaders from government, investors, the mining industry and CSOs at the World Bank-IMF Annual Meetings in Washington.  A second message emphasized by Malaysia’s former finance minister Tan Sri Nor Mohamed Yakcop was the need for governments of low-income countries to use resource wealth to invest in their people by making high-quality education widely available.

Since Malaysia´s independence in 1957, he said, poverty has declined from nearly 60 percent to less than two percent today.   What is the secret to Malaysia’s success?  Two factors: political philosophy and discipline.  The country´s political philosophy changed in 1970 from laissez-faire to moderate government intervention directed towards two goals; eradicating poverty and sharing prosperity. A key factor in reaching these goals was a consistent dedication of at least 25 percent of the government budget to education.  And where did much of this budget come from?  Extractives revenues.  Thirty percent of government revenue came from Petronas, the Malaysian States Owned Oil and Gas Company.  The second element in Malaysia’s secret to success was discipline, which required that the revenues from extractive revenues be managed in a completely apolitical fashion.  Yakcop, now deputy chairman of Malaysia’s sovereign wealth fund, explained that Petronas’s complete independence from political pressure has allowed for the revenues to be invested wisely over the long run.

The panel, Making Extractive Industries’ Wealth Work for the Poor, was organized to draw lessons from Malaysia’s success that might be replicated elsewhere, including Tanzania, where vast offshore natural gas reserves have been discovered. That country’s Chief Secretary of Government, Ambassador Ombeni Sefue, also took part in the panel.  In Tanzania and across Africa, extractives revenues are especially important, said the Bank Group’s Managing Director, Sri Mulyani Indrawati,  because, “already in 2012, Africa’s oil and mineral exports were worth $305 billion dollars—almost seven times more than development assistance to Africa from other sources.”  She noted that as a former finance minister herself from oil-rich Indonesia, these types of revenues need to be focused on and managed in the best possible way to maximize their benefit to the public.

Like all the panelists, Sri Mulyani cited transparency as a vital condition and noted that when she was Finance Minister of Indonesia the country became a candidate of the Extractive Industries Transparency Initiative (EITI), which is opening information about the EI revenues paid in Indonesia.

Ombeni Sefue echoed Yakcop´s comments about the importance of building a national consensus around the development of extractives as a resource for the country as a whole to support shared prosperity, rather than something to fight over.  Sefue said his government is building this vision and trying to generate consensus.  But he acknowledged that getting the balance right between the government and the international companies is difficult, though important.  One way that Tanzania is hoping to enhance benefits for local populations is through increased use of local suppliers and hiring of local workers.  As for future plans on investment of EI revenues, Sefue said that Tanzania hopes to follow a model similar to Malaysia’s and invest in those areas that can unleash economic growth, such as education and infrastructure.

Marinke van Riet, International Programs Director of the CSO Publish What you Pay, pressed the other panelists not to forget that building national consensus requires not only a vision coming from government, but also communication with civil society and the broader public.    She also echoed Sri Mulyani’s comments on the importance of EITI in building confidence with the public.  Van Riet proposed that tax payment disclosures and contract openness should be mandatory regardless of where the companies are listed.

Sam Walsh, CEO of Rio Tinto, one of the world’s largest mining companies, with a presence in 45 countries, agreed with Van Riet on many points.  As a strong supporter of EITI, Walsh agreed that contract transparency goes a long way to strengthen relationships with host countries and local populations, which are critical in the mining industry since projects take an average of 27 years from start to commercial production. He also emphasized that Rio Tinto is very transparent about their tax contribution, which last year totaled over $7 billion worldwide, from a $10 billion global profit the same year. Walsh also agreed with Minister Sefue on the importance of local content, noting that Rio Tinto is the largest employer of indigenous workers in Australia.

Panel moderator Daniel Yergin, author of best-selling books on energy and global politics, peppered panelists with questions that challenged their positions, such as the role of national sovereignty in the call for standardized worldwide requirements on EI transparency, and how Sovereign Wealth Funds should invest EI revenues.

The panelists’ views showed nuanced differences, but broad consensus on the fundamentals. Resources belong to the people of the country, and revenues from them should deliver benefits to all citizens. Extractives companies need a fair return on investment. Governments need to be transparent in what they collect, and how they spend it. Their investment strategies may vary from one country to another, but the goals are similar: build human capital and a diversified economy that will prosper when the resources have been exhausted.