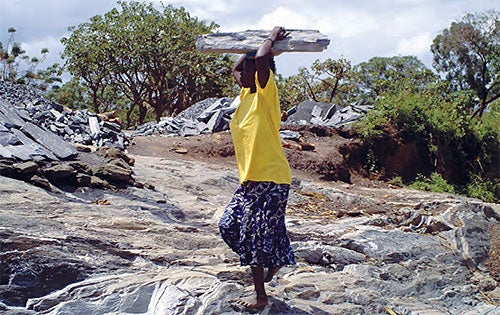 Women face enormous risks in conflict-affected settings. Yet they have also proven to be powerful actors, whose interventions sustain economic security or may reduce or discourage violence.  Under the right conditions, women can organize to build lasting peace that makes sustainable growth possible in resource-rich countries. These are some of the issues to be explored on Friday, October 11 at a feature panel from 11 a.m. to 12:30 p.m. at the World Bank (follow on Twitter at #wblive), Blessing or Curse - Making Earth's Riches Work for the Poor and Fragile Countries.

In times of conflict, where extractive resources may be one key driver, women face a paradoxical situation.  On the one hand, they may assume a more prominent economic role in the household in the absence of men. Yet their vulnerabilities are heightened as security conditions weaken.

In the Democratic Republic of Congo (DRC), recent unpublished World Bank research illustrates this paradox.  Women living in the artisanal mining zones of South Kivu have deliberately moved to mining areas to pursue economic opportunities.  But they are often vulnerable, due to a lack of social networks in these mining areas, coupled with ineffective implementation of protective laws for women’s safe work in the mines. In the most extreme cases in South Kivu, this vulnerability leads to coercion, intimidation and sexual violence. Female miners are as such doubly ‘at risk’: they are rural women in a war zone, and also working outside any legal framework in precarious social, economic and environmental conditions.

But women’s agency also emerges even in these extreme war situations, as resource extraction can prove to be at once a driver to protracted conflict, and equally a potential pathway to development.

In Bougainville, Papua New Guinea (PNG), for example, a poorly-managed mining project became the central flashpoint for a decade-long civil war. Women described their lives between the PNG Defense Force and the Bougainville Revolutionary Army as “life between two guns.” But these same women were instrumental in ending the conflict.

They organized prayer meetings, reconciliation ceremonies, and peace marches to advocate for peace. They used their status in the matrilineal society to negotiate for peace both within their communities, as well as with the warring factions. Women’s organizations provided humanitarian and emergency assistance to communities on both sides of the conflict.  While women did not have as visible a role in the formal peace negotiations, their influence in ending the conflict is well recognized.

This example of women acting as change agents, in this case as peace-brokers, shows the importance of women’s involvement throughout natural resource development—from decisions about development of projects, to active participation in the mining economy itself to conflict resolution. And even in non-conflict settings, women’s involvement in decisions about community development, benefits sharing, the relationships with extractives companies are critical to avoiding conflict, and promoting sustainable development and shared growth.

The World Bank Group’s programs for sustainable development in mining need to address the full range of women’s roles and capabilities in and around the sector. Training in literacy, savings, and small-business development can give women the skills to seize economic opportunities beyond mining. Supporting women and communities with health and child care options can be part of a holistic approach to reducing the vulnerabilities of women in extractives communities in fragile areas.

In DRC, the Bank Group has supported the establishment of a national “Women in Mining” association, RENAFEM. It unites women active all along the mining value chain—from small-scale miners to academics, to business women to government officials. Through this national network, provincial focal points work with local women’s groups to disseminate laws on the participation of women in mining, to provide technical grants to build ancillary women-led businesses around mines, and support maternal and child care so that women can work freely in the mining sector.

In Papua New Guinea, programs for women in mining and petroleum communities include gender-based violence awareness activities for men and women, literacy and business-development training, and even activities, in partnerships with corporate partners, to help women establish entrepreneurship opportunities around solar-lighting.

A World Bank study underway aims to identify and understand potential conflict-prevention entry points along the Extractive Industries value-chain, from discovery of resources, to their extraction and transport. And a new World Bank Institute (WBI) global online community of practice will include a dedicated focus on women in mining in fragile and conflict-affected areas. (https://collaboration.worldbank.org/groups/gender-issues-in-fragile-situations.)

These activities seek to understand and address how fragility shapes women’s experience and opportunities. They also aim to ensure that women are empowered to participate in growing extractives sectors, both as empowered decision-makers and peace builders. This is the spirit that characterizes most of the women in these local and secluded areas in Africa. They may not have much money, but they don't allow any situation put them under. They are brave and strong, and above all knowing the responsibility they have to provide for their families (kids especially) they must brave the danger as well as be innovative to bring in food and income to face the future.

It will be interesting to know what happens to young vulnerable girls in fragile and conflict affected areas.