Need solar resource data or maps? We've got an app for that 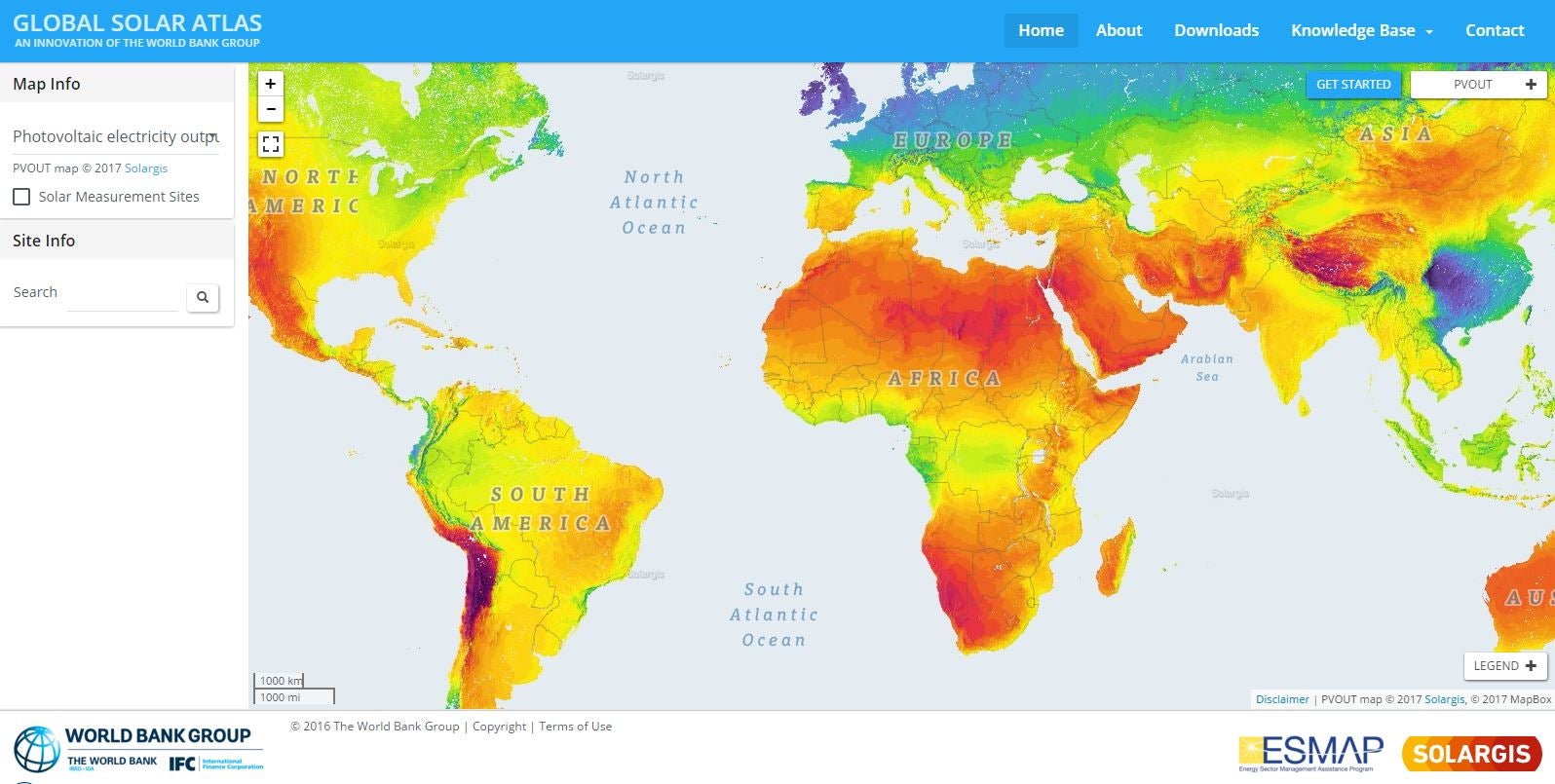 Last month the World Bank launched a new Global Solar Atlas: a free, online tool that lets you zoom into areas anywhere in the world in great detail (1km resolution), and with downloadable poster maps for all developing countries. This new interactive tool is welcome news for anyone – policymaker or commercial developer – who has ever looked for solar maps or resource data from the cluttered and sometimes confusing array of public resources available

For this new atlas to have a greater impact, the following needs to happen.

First, we need to cut down on the duplication and often wasted resources associated with national mapping projects. For example, before the Global Solar Atlas was launched, it cost $100,000-150,000 to commission a solar resource map for an average-sized country, and the work took around six months to complete. But with the Atlas,  we have completed this task for  all developing countries at a fraction of the cost, allowing funding to be channeled into higher value activities such as geospatial planning to identify renewable energy zones, or ground-based measurement campaigns to help further improve the solar resource models on which the results are based. This new tool could be an invaluable asset for governments, development agencies, and foundations so that they no longer commission country-based mapping efforts that are, in many cases, costly and may end up duplicating what the Atlas offers already.

Second, we need to continuously improve the data behind the Atlas, and other commercially available solar resource models, by investing in ground-based solar radiation measurement stations, with the first two years of data compiled and available in the public domain. But this is easier said than done. There are major gaps in the current measurement data network, especially in developing countries, and this adds to the uncertainty of the solar data provided. In turn, that increases developer risk and ultimately costs. Unfortunately, it is very easy to commission a poor quality measurement campaign, or to leave out key bits of data that are needed for eventual analysis. So adopting a universal set of standards is vital.

Third, public research institutes that have previously carried out solar resource assessments need to take a hard look at what value they add in this area. Over the last five years a number of commercial providers of solar resource data have emerged that maintain standing solar resource models, and work continuously to improve and update their solar data. This is an excellent example of public incubation and research being translated into successful start-ups, and should be celebrated. But the originators now need to move on to new frontiers of research to avoid crowding out commercial providers, and to help generate the next generation of methodologies and tools.

Finally, an effort is needed by the key international and national providers of solar resource data to consolidate around the Atlas and other free, high quality tools, and archive datasets that are now superseded. Previous efforts to map solar resources in countries and regions (such as SWERA) performed an important educational role, but in many cases the methodologies and data used is now out of date, and the resulting maps are less accurate than what is now available from the Atlas and other tools. For the uninformed user this is confusing, and potentially leads to sub-optimal decision-making.

As a result of rapid cost reductions, and excellent solar resources in most developing countries, the World Bank is seeing an explosion of demand for solar power in our client countries. We now have the data to make informed policy and commercial decisions, so let’s use it.

Oliver Knight is a Senior Energy Specialist at The World Bank. The Global Solar Atlas was funded by the Energy Sector Management Assistance Program (ESMAP), and is available at http://globalsolaratlas.info.
Topics
Energy