Over the past few years, China saw more investment and installation in renewable energy than any other country in the world . In fact, in the period between 2010 and 2015, investment in the sector reached $377 billion, more than the next two countries - the United States and Germany – combined. China has 150 GW wind power and 77 GW solar photovoltaic power capacity  compared to the U.S., for example, which has 80 GW in wind and 35 GW solar PV.

China has performed well above the global average, shined as the regional leader in East Asia, matched, if not outperformed, OCED countries in many dimensions, many countries with much lower investments and capacity have scored higher on renewable energy indicators.

The World Bank's Regulatory Indicators for Sustainable Energy (RISE) could shed some light on the issue. Launched in February 2017, RISE is a policy scorecard of unprecendented breadth and depth covering energy access, energy efficiency and renewable energy in 111 countries . It focuses on regulatory frameworks in these countries and measures that are within the direct responsibility of policy-makers. The result is based on data made available to the team at the end of 2015 and thoroughly validated. 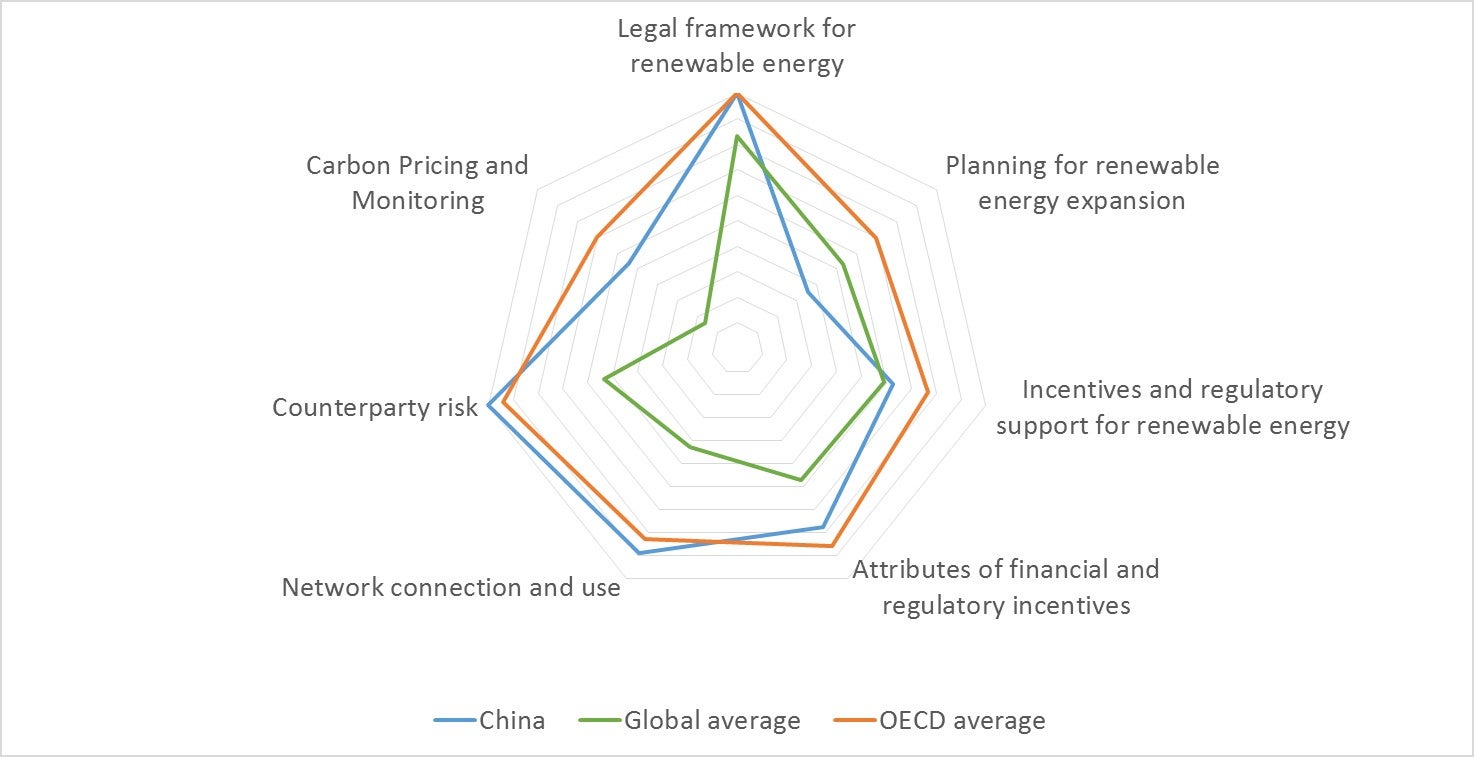 RISE found that China’s conundrum is partly due to factors that are beyond what energy policy can control. China is the second largest economy in the world, with dramatically expanding power demand that creates opportunities of all kinds. A large and skilled labor force and supply chain allow cost-effective wind turbines or solar plants to be built locally. The government has also made important steps to mobilize private investment across all sectors.

However, some elements of the policy framework, if strengthened, might lead to even greater utilization of the country’s renewable resources. The average curtailment rate in 2016 is 17% which means 17% of generated electricity is not able to be delivered to final consumers, therefore wasted.

China could strengthen the following elements in its renewable energy regulatory framework:

1. An integrated planning structure in generation and transmission We found there is neither a power sector expansion plan nor a transmission plan that considers the scale-up of renewable energy. However the result didn’t take the new 13th Five-Year Plan into consideration which has addressed systematically generation and transmission planning with renewable energy development. In addition, various planners in the energy sector (NDRC, NEA, MIIT, and MEP) still need to coordinate on where the most demand is. The key, as with other policies in China, is effective implementation and enforcement of planning at local levels.

2. Priority dispatch of generation from renewable sources While renewable energy plants enjoy prioritized access to the grid, generation is not dispatched based on operating cost, i.e. the economic dispatch order. China still has the dispatch rule of “equal shares generation,” which assigns all generating plants equal number of hours to operate each year, regardless of their actual operating cost. Furthermore, because utilities are not required to provide compensation for any form of curtailment, or where the required offtake infrastructure is not built in time, the risk falls entirely on the project developers. While this is not enough to limit all investment, it can lead to greater uncertainty and fewer financially viable projects.

3. Regional power exchange and grid integration Exchanging power between provincial areas is still limited due to the lack of an electricity market where power generation could be pooled together and exchanged among provinces. This is important because integrating a higher proportion of variable renewable energy causes power supply fluctuations. A larger balancing area helps enhance systematic stability. There are also administrative barriers and regional competition between provinces in China that block trading of power.

How can China bridge these gaps and get better at delivering clean electricity to end-users?

The country’s latest round of power sector reform aims to take on this very challenge. The overarching philosophy is to let market forces play a decisive role in the allocation of resources. As the GDP, as well as power demand, decelerates, it is critical to shift the mindset from installing more megawatts to actually delivering clean energy to consumers. To this end, these measures, if strengthened, could deliver more green power to Chinese consumers and achieve further carbon reduction: Challenges and opportunities abound, as more and more renewable energy makes its way into the system. The more it is deployed, the lower the price of power is from any source. It would be wise for Chinese planners and regulators to preempt this situation, which already occurs in Europe and some states in the United States. Renewable Energy Pillar Lead for RISE at the World Bank