Between 2007 and 2011, Peru doubled electricity access rates from 30 percent of households to over 60 percent.  The national rural electrification program has been supported by US$50 million in World Bank financing and US$10 million from the Global Environment Facility (GEF).

This is a remarkable achievement, but to make sure that the new opportunities benefit local people in rural areas, an additional initiative was launched. This “productive uses of electricity” pilot project adapted lessons from two World Bank-supported activities in Indonesia under which the national utility reached out to local communities through NGOs. 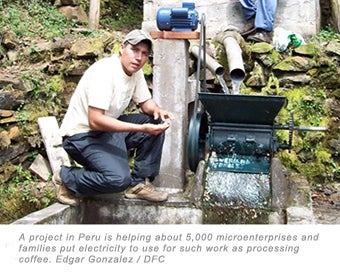 In the Peruvian case, competitively selected NGOs were contracted to help rural enterprises identify appropriate electrical equipment, conduct market assessments, prepare business plans, access existing sources of finance, and link with suppliers and buyers.  “Electricity fairs” and community theater productions were used to help spread the word about how electricity could be put to use.

To date, the pilot program has helped 5,000 small businesses and households in rural areas use the electricity to develop new enterprises. For example, a collective mill in Piura whose 1,000 members had long processed their grain by hand was able to purchase mechanized equipment and was connected to the grid.

In Rwanda, the International Development Association (IDA), the World Bank’s fund for the poorest, helped provide grid-based power to nearly 1 million people between 2009 and 2012, a threefold increase, while schools and health centers achieved a 70 percent increase in connections.

In Bangladesh, over 2 million low-income rural households now have electricity – delivered by solar panels – thanks to a project partly financed by IDA. Some 4 million Africans are using off-grid lighting, thanks to Lighting Africa, an IFC program.

These leaps forward reflect the priority many developing countries attach to bridging the electric power access deficit that still affects 1.2 billion of the world’s people. They are part of a global effort by the World Bank Group that has brought electricity to 41 million people since 2007, a quarter of whom were reached with off-grid power.

This concentration on expanding access has been reinforced by the Energy Sector Directions Paper, recently endorsed by the Bank Group’s Board. It describes how the World Bank Group will help client countries secure the affordable, reliable, and sustainable energy supply needed to end extreme poverty and promote shared prosperity. 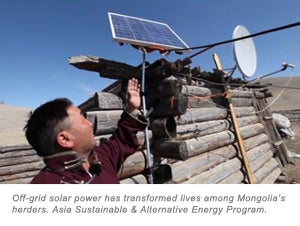 Hydropower is the largest source of affordable renewable energy deployable at scale in developing countries. Countries in Africa and South Asia, where the access deficit is greatest – 306 million in India, 82 million in Nigeria, 56 million in DRC – are also among those with the largest unrealized hydropower potential, as are Nepal and Myanmar. About 90 percent of Africa's hydropower potential has not yet been tapped. The World Bank Group is committed to responsible, sustainable development of hydropower projects of all sizes and types depending on the local context – run of the river, pumped storage, and reservoir – including off-grid projects that meet decentralized rural needs.

Two recent examples are financing of $340 million to support the 80 megawatt Rusumo Falls hydroelectric project for Burundi, Rwanda and Tanzania, announced by Bank Group President Jim Kim last May. Another $150 million is provided for rehabilitation of the Ruzizi I and II hydroelectric projects and financing for Ruzizi III, supplying electricity for Rwanda, Burundi and DRC. These projects and others like them can transform whole economies and the lives of millions.

On the necessary global transition to a more sustainable energy path, a recent World Bank-led Global Tracking Framework Report on Sustainable Energy for All, emphasizes the role of developed and emerging market countries. It shows that progress on expanding renewable energy and improving energy efficiency depends on action by the world’s 20 largest economies, as they are the world’s largest energy consumers, responsible for 80 percent of greenhouse gases emitted.

Bank Group energy financing – including IBRD, IDA, IFC, and MIGA guarantees – has totaled $49 billion over the six years since 2008, of which $19.2 billion was for energy efficiency and renewable energy projects, while $8.1 billion supported transmission and distribution expansion, and another $8.3 billion other energy programs, including policy and regulatory reform. Over the same period, the Climate Investment Funds committed over $7.6 billion to date to clean energy projects, and IFC committed a total of $4.5 billion to renewable energy and energy efficiency elements of projects in sectors other than energy.