After the storm: Time to rebuild faster and stronger

With every calamity comes an opportunity: to rebound and rebuild stronger than before

The economies of Central Asia faced such an opportunity following the major economic shock they experienced at the end of 2014. The collapse in commodity prices affected not only oil-producing countries – highlighting the narrow production base on which their prosperity rests – but also oil importers, whose growth depends largely on remittance-fueled demand.

All countries in the region experienced significant welfare losses. In 2015-16, the volume of imports declined 15% in both Tajikistan and Uzbekistan, and 25% in Kyrgyzstan – a clear sign that households and firms were constrained.

After the initial shock, however, the economies of Central Asia rebounded. This was thanks to supportive fiscal and monetary policies, namely fiscal expansion and relatively lose monetary policy. Growth has picked-up: for Central Asia, as a whole, it is now projected to reach 4.4% in 2017, against 2.8% the year before. Inflation has returned to manageable levels: in Kazakhstan, it has plummeted down from the double-digit rates seen after the fall in oil prices, confirming that the previous spike was merely a one-time adjustment.

But, have the countries of Central Asia done enough to shift the focus from structural constraints to durable prosperity? According to the recently released Economic Update for Europe and Central Asia, important challenges still lie ahead.

Future growth needs to be export-driven

With falling household incomes and strained state budgets, domestic demand alone will not be able to support growth. Over the past two years, consumption declined 16.4% in Tajikistan, and downward adjustment may still be needed in other countries as well. In the Kyrgyz Republic, fiscal stimulus – additional spending by the state – helped to boost the economy, but it has also resulted in mounting debt and limited room to respond to future shocks.

Overall, Central Asia is the only group of countries in the Europe and Central Asia region where fiscal deficits are projected to widen (to -5.1%) in 2017. 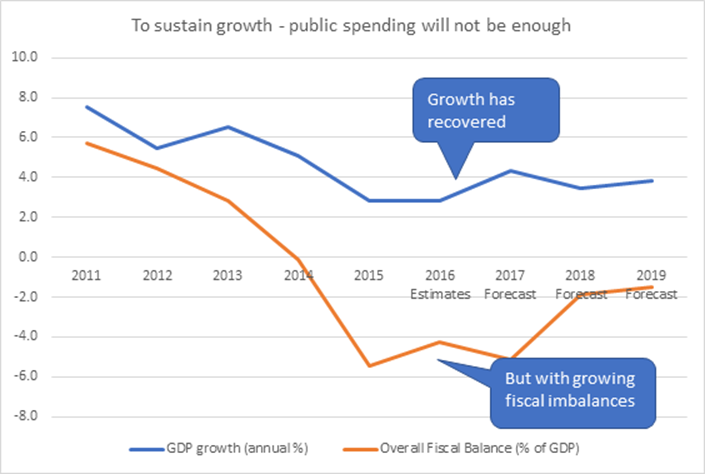 To sustain economic growth, therefore, the region must find ways to tap into foreign markets through trade. More favorable exchange rates can give exports a big boost (with depreciated currencies, Central Asia’s products are now cheaper), but this advantage needs to be leveraged through export-friendly strategies. These include cautious fiscal policies – avoiding excessive spending which can push wages and prices up – and continued efforts to strengthen the basic building blocks of competitiveness.

The financial sector has a critical role to play in ensuring that resources flow to the more competitive export-oriented firms and to innovative start-ups. However, the banking sector remains fragile in many countries. The crisis has exacerbated weaknesses: depreciated exchange rates have resulted in higher debts, and banks suffered heavy losses from their investments in commodity production and real estate. But there are also fundamental problems. For instance, connected lending practices – where the bank and the borrowing firm are connected – undermine the efficient allocation of capital toward productive, export-oriented production in new sectors and hurt the profitability of the banks.

Regional economic cohesion is being tested. The promise of the Eurasian Economic Union has not materialized at the pace and scope expected. This calls for more, rather than less, cooperation to ease trade and realize win-win potential on digital and power connectivity.

Regional cooperation will also be needed for Central Asia to turn China’s major Belt and Road Initiative to its own advantage and re-establish itself as the land bridge between East and West and between North and South.

There are very encouraging signs that the countries of Central Asia are “steering their ships” in the right direction. Several countries, most notably Kazakhstan and Uzbekistan, have taken important steps. But the journey is only beginning.
Topics
Macroeconomics and Fiscal Management
Countries
Kazakhstan
Kyrgyz Republic
Tajikistan
Turkmenistan
Uzbekistan
Regions
Europe and Central Asia