In Armenia, is the ‘economic pie’ smaller than it should be?

Last week, I posed a provocative question – and today I would like to share some recent research by our analytical team here in Yerevan that looks at this issue in detail: what is the economic cost of Armenian women not participating in the labor market?

Is it possible that the constraints women face result in misallocated talent which constrains the overall economy and makes the economic pie artificially smaller?

Using all of the characteristics and data that we have on Armenia’s economy, and applying a methodology for modelling that has been used for a wide range of other countries in the world, we then try to test whether we would see – if gender gaps were closed and barriers to women’s participation removed – an economic ‘bump’.

Our modelling results show that as much as 14% of potential GDP is lost in Armenia due to unequal opportunities for women to participate in employment and entrepreneurship. From the point of view of total economic output, this tells us that the ‘economic pie’ could be considerably bigger. That means that raising women’s participation is not a ‘zero-sum game’ ! 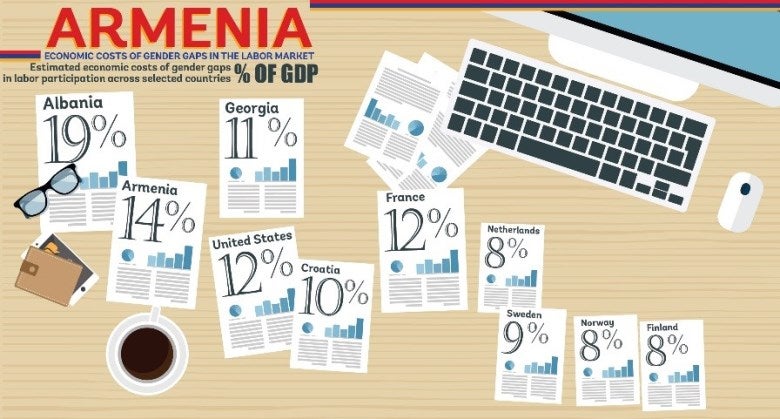 But, Armenia is not alone in having a smaller ‘economic pie’ … and this challenge is not exclusively a problem for ‘developing countries’ either. So, the challenge for policymakers – and for the World Bank Group, as we seek to help – is to take action on multiple fronts to help grow that ‘economic pie’ in Armenia and beyond.