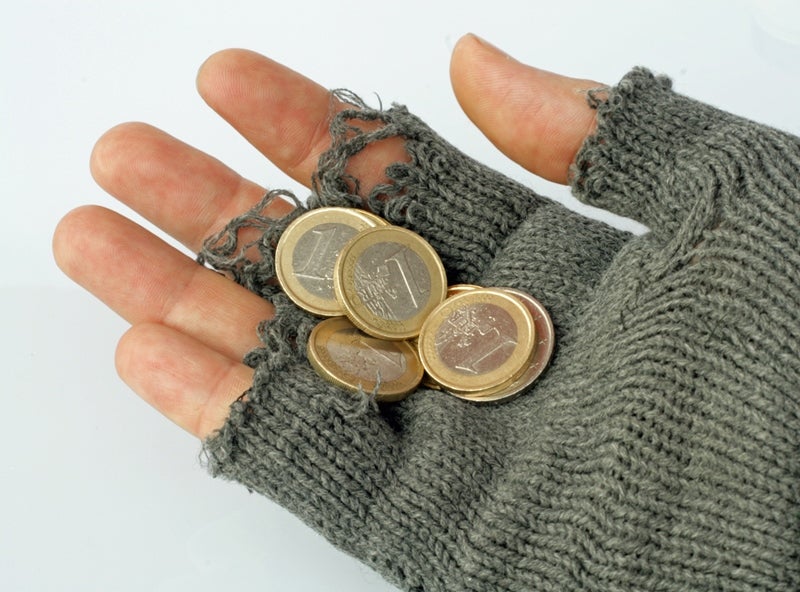 When development practitioners such as ourselves think of poverty, the EU is not what comes to mind first. While it is true that average incomes are higher in Europe than in most regions of the world, it is also true that the 2008 global financial crisis had a huge impact on the welfare of the most vulnerable in many countries in the region.

Can the lessons from the global financial crisis help countries better protect their poor?

It is well known that the 2008 Global Financial Crisis triggered a significant double-dip recession and pushed some EU member states into protracted economic slumps.

What is less clear is what this meant for poverty.

Relative poverty measures typically used in the EU would seem to suggest that poverty did not increase much.  Eurostat data shows that Europeans at risk-of-poverty - measured as the share of people with a median income below 60% - increased only slightly, from 23.7% in 2008 to 24.7% in 2012. However, this is partly because median incomes themselves declined, quite dramatically in some EU countries.

The picture, therefore, changes significantly when using a poverty measure that fixes median incomes at pre-crisis levels. In fact, this shows that poverty in the EU actually increased significantly between 2008 and 2012 in most countries, especially in Southern Europe, and nowhere more than in Greece - where it more than doubled.

This is not too surprising. Greece was particularly hard hit as household income per capita fell by 37% between 2008 and 2012 and unemployment climbed to 24.5% by the end of 2012. In contrast, European countries such as Poland and the Slovak Republic managed to safeguard growth and achieve significant and sustained reduction in poverty during the same period. 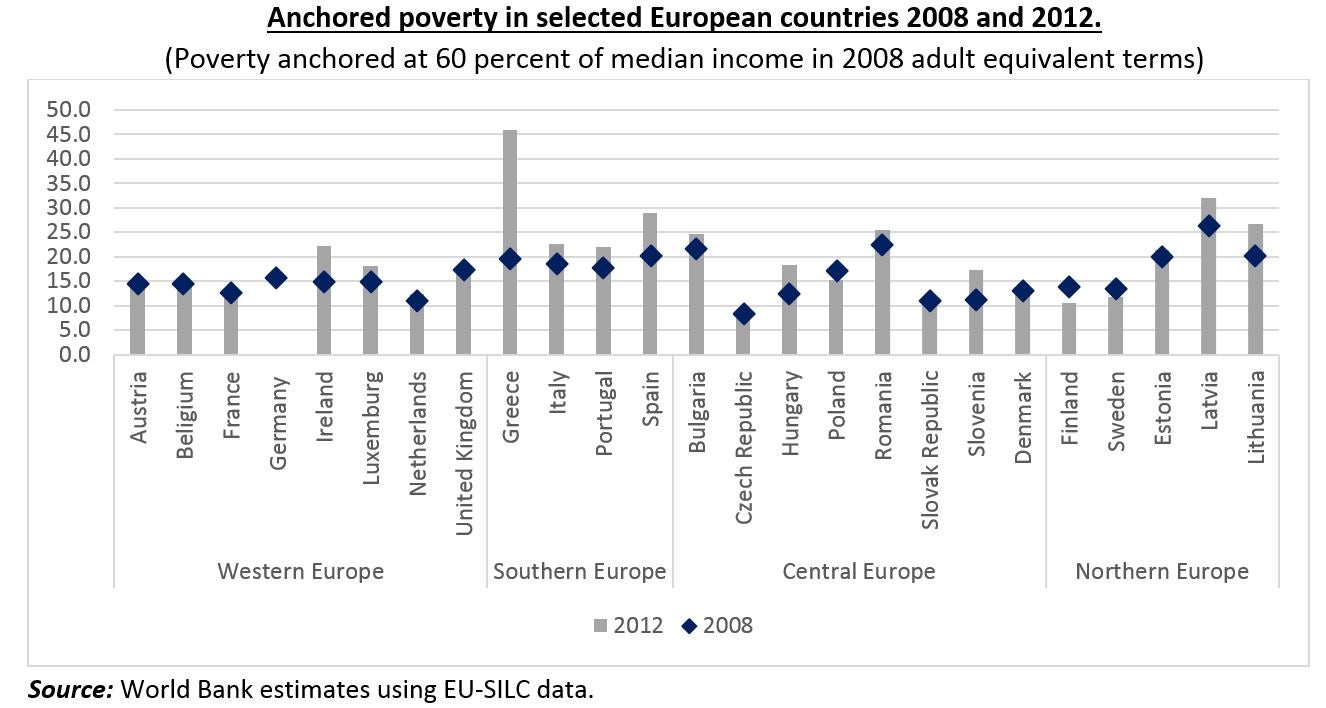 To better compare poverty across EU countries with different income levels, we also measure poverty using an international poverty line, which is the share of people in adult equivalent terms living on less than $10/a day, in terms of Purchasing Power Parity (PPP). According to this measures, poverty in Italy, Spain, and Portugal increased by 2.2 percentage points on average, ending up higher than in the Czech Republic in 2012. More dramatically, the share of people in Greece living under $10/day increased four-fold - to 12.3% in 2012, a rate higher than in Poland.

What led to these steep increases in poverty?

Given that labor accounts for most household income in the region, it is not surprising to find that a worsening labor market was the most important contributor to poverty increases after 2008. For example, more than half of the increase in Greece’s poverty rate between 2008 and 2011 can be accounted for by lower labor incomes, while employment losses nearly account for the other half.

Households tried to cope by moving in with family members, but this was insufficient to mitigate the problem - particularly given cuts in social assistance and higher taxes. In fact, cuts in social assistance, which were particularly prevalent in Central and Southern Europe during the crisis, contributed to the rise in poverty. Social assistance mitigated a small part of this impact only in Spain, while pensions played a larger role in many other countries in the region. The reliance on pensions as the main form of a social safety net and the steep increase in youth unemployment meant that young people suffered the largest increases in poverty across the European Union between 2008 and 2012.

What can countries do better to protect their poor against future crisis? Three lessons come out of the experience with the global financial crisis.

First, labor markets are the main source of incomes and the greatest source of vulnerability for low-income households. No amount of social assistance can compensate for the long-lasting effects of long-term unemployment and inactivity associated with a crisis. Therefore it is critical to strengthen macro-economic fundamentals and build fiscal buffers during good times to become less susceptible to a crisis. In addition, implementing growth-enhancing structural reforms to strengthen long-term growth is the only way to ensure an economy remains competitive and allows for continued employment and real wage increases.

Second, implement strategies that prevent young people from leaving formal education and training while enabling them to acquire marketable skills. The youth were most at risk during the 2008 financial crisis because they found it hard to compete in the labor market in too many countries. Although improvements in public employment services for young people and EU-wide initiatives, such as the Youth Guarantee scheme can help, they are no substitute for a new generation of innovators, thinkers and high caliber entrepreneurs.

Third, maintain effective coverage and adequacy of existing social assistance programs, particularly during downturns. Guaranteed minimum income programs are cost-effective and can provide mitigation against shocks, especially for those that do not benefit from pensions or other social protection schemes. Do not wait for an economic crisis to reform social assistance programs. Reducing leakage of social assistance transfers to the rich and strengthening the targeting and coverage of programs during good times can help countries prepare for economic downturns.
Topics
Financial Inclusion
Financial Sector
Macroeconomics and Fiscal Management
Poverty
Countries
Bulgaria
Croatia
Poland
Romania
Regions
Europe and Central Asia