How to tackle a growing HIV epidemic with limited resources?

Belarus’ HIV response is faced with the need to provide treatment to a larger number of people living with HIV than ever before and to simultaneously continue scaling up prevention. How to do this in a context of limited resources, poses a major challenge for any planner. Most recent HIV estimates from Belarus illustrate the rapidly growing challenge. UNAIDS estimated that the number of PLHIV in Belarus increased from 5,600 in the year 2000 to 35,000 in 2015. New HIV infections increased from 1,700 per year in 2000 to 2,600 in 2010 and then doubled again to reach 5,300 in 2015.

Belarus worked with the World Bank, UNAIDS, UNDP and the Global Fund towards developing an answer to the tricky question how to optimally allocate its HIV resources. Collaborating with the Burnet Institute in Melbourne, Australia, we applied Optima, a mathematical model for epidemic, program and economic analysis. Doing this work by early 2015 was essential because Belarus’ new National HIV/AIDS Prevention Program (NAP) 2016-2020 was being developed and the concept note to the Global Fund due for submission.

The first step of our study team was to analyze epidemic dynamics in Belarus. Results of epidemic modelling suggested that transmission through drug injecting practices remains a key factor in the spread of HIV in Belarus, but that the role of sexual transmission is also increasing – mostly involving sexual partners of people who inject drugs, sex workers and their clients and, increasingly, men who have sex with men.

The second step was to establish cost and coverage of the different HIV response programs in Belarus. We found that money was spent on a range of programs, about 15% on treatment, 12% on prevention for key populations and the remainder on a whole range of other diagnostic, health, management and communication activities (see first column of Figure 1). All this cost and coverage information was used in the model, which uses a stochastic descent algorithm for optimization – in short, to find out, which alternative combinations of all these programs would give the country best value for money in reducing new HIV infections and AIDS deaths. 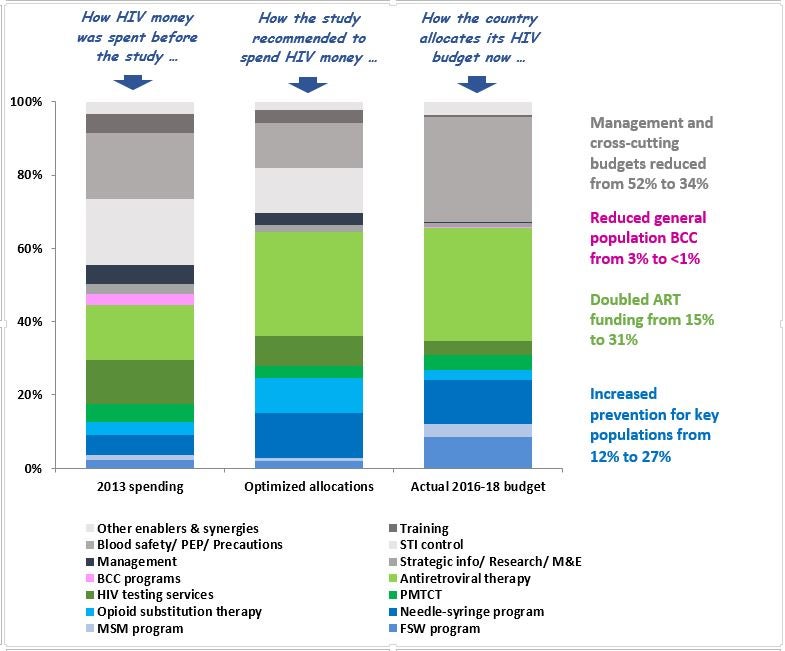 What was critical about documenting these findings was not that they were revolutionary – in fact they confirm basic reasoning of epidemiology and public health: focus on important core populations first and increase coverage of high-impact programs. What was essential was pulling all pieces of evidence together to show that ART and focusing on marginalized and often stigmatized populations including people who inject drugs and men who have sex with men is without alternative in addressing the epidemic and will indirectly benefit the population at large.

Throughout the study we had closely collaborated with government experts from the fields of epidemiology and HIV programming. This facilitated that findings of the study were proactively used in national planning. Consequently, the Government of Belarus took the recommendations into account in its revised National HIV/AIDS Prevention Program (NAP) 2016-2020 by: A year later, early in 2016, we carried out a second analysis to assess the effect of these changes in budget allocations. This analysis found that the improved budget allocation in the new national programme will avert an additional 3,200 new HIV infections and 1,800 AIDS deaths between 2016-18 (Figure 2) and, if sustained, avert 25,000 new infections and 13,000 AIDS deaths by 2030 – a reduction by around a third compared to business as usual.

Figure 2. Effect of changes in budgets on new HIV infections and AIDS deaths (2016-18) 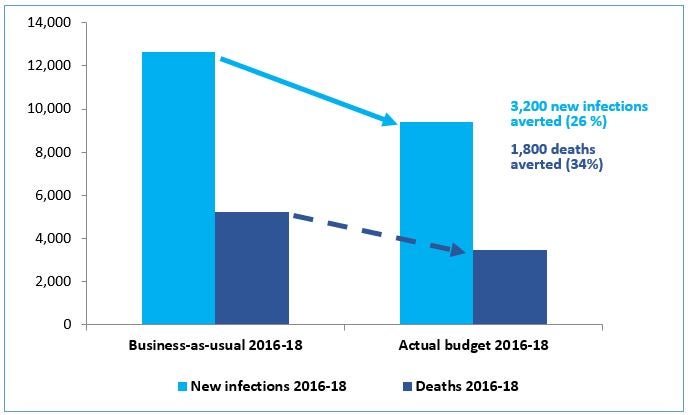 Our case study demonstrates that application of HIV investment analytics in Belarus informed by data, expert opinion and mathematical modelling can change budget allocations, which we can expect to have substantial impact on the lives of people affected by HIV.

At the same time, as Belarus is faced with a growing HIV epidemic (unlike many countries in Africa where HIV has stabilized at a high-level), our analysis also suggested that current investment into HIV programs is insufficient to achieve epidemic control. Additional investment and efficiency gains will be required as part of a sustained HIV response to reverse the epidemic’s growth sustainably and achieve more ambitious 2020 and 2030 targets.