Malaria is a preventable and treatable disease, but for how long? 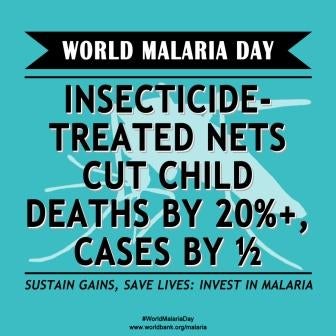 This year, on World Malaria Day, April 25, the global health community has reason to celebrate. Indeed, thanks to substantial investments from partners and countries over the last decade, the scorecard on malaria reports good news:  a reduction of more than 50% in confirmed malaria cases or malaria admissions and deaths in recent years in at least 11 countries south of the Sahara, and in 32 endemic countries outside of Africa. Overall, the number of deaths due to malaria is estimated to have decreased from 985,000 in 2000 to 655,000 in 2010.

The fact that an estimated 1.1 million African children were saved from the deadly grip of malaria over the last decade is an extraordinary achievement. By the end of 2010, a total of 289 million insecticide-treated nets were delivered to sub-Saharan Africa, enough to cover 76% of the 765 million persons at risk.

There is more good news: the number of rapid diagnostic tests and artemisinin combination therapies (ACTs) procured is increasing, and the percentage of reported suspected cases receiving a parasitological test has increased from 67% globally in 2005 to 73% in 2009. The global community has launched efforts to make ACTs affordable in eight countries, thanks to the launch of affordable medicines facility for malaria, for which an evaluation is ongoing.

Against this positive landscape, two tornadoes loom on the horizon:  increasing ACT and insecticide resistance.  A recent Lancet article by Professor Nosten and his colleagues confirms that the threat of artemisinin resistance in the Greater Mekong sub-region must be taken seriously.   Without being alarmist, the spread of drug-resistant malaria parasites to other parts of the world, particularly to sub-Saharan Africa, would be like a replay of what the world experienced in the 1970s with chloroquine -- once a front-line treatment to malaria -- and would translate into a major public health threat, compromising the gains we’ve made.

The picture on insecticide resistance is also grim. The World Health Organization (WHO) reports that more than 70% of countries reporting data on insecticide susceptibility in 2009 account for resistance to one or more insecticides (particularly the pyrethroids, the only class of insecticides used in long-lasting nets).  More than 40 endemic countries currently acknowledge such resistance; geographical areas of concern include Western and Central Africa and India.

WHO has been proactive in developing in 2010 a Global Plan for Artemisinin Resistance Containment and called for its operationalization not only in the greater Mekong area but also in all endemic countries. So far, limited resources have been earmarked for this. More recently (end of 2011), WHO elaborated a global plan for insecticide resistance management which calls for pre-emptive action to preserve susceptibility to insecticides.

The rallying cry of the malaria community on World Malaria Day this year, “Sustain Gains, Save Lives:  Invest in Malaria,” is an opportunity to remind ourselves that, beyond financing still-effective malaria control interventions, substantial investments to contain and prevent drug and insecticide resistance  must also become a top priority. This will require, more than ever, that countries be equipped to perform essential public health functions and that action across borders becomes an imperative.