Shining a light on mental illness: An “invisible disability” 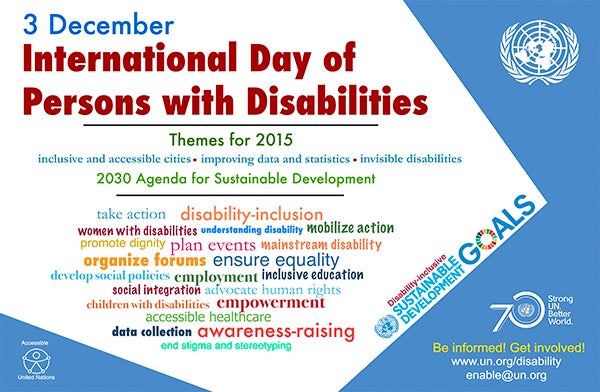 This year’s International Day of Persons with Disabilities, observed December 3, takes as its theme: “Inclusion matters: Access and Empowerment for People of all Abilities.”  Under this umbrella, the U.N. and other international agencies urge inclusion of persons with “invisible disabilities” in society and in development efforts.

This call is long overdue; persons with mental and psychosocial disabilities represent a significant proportion of the world’s population with special needs.  The World Health Organization (WHO) estimates that millions of people have mental disorders, and that one in four people globally will experience a mental disorder in their lifetime. Moreover, almost one million people die each year due to suicide, which is the third leading cause of death among young people. According to several recent reports, suicide has surpassed maternal mortality as the leading cause of death among girls aged 15-19 years globally.

Aside from facing entrenched stigma and discrimination – and physical and sexual abuse in homes, hospitals, prisons, or as homeless people --  persons affected by mental disorders are excluded from social, economic and political activities.

When I was a student in the early 1980s working at St. Elizabeths Hospital in Washington, D.C., I had the opportunity to witness first-hand the plight of those “excluded and marginalized” from society due to mental disorders.  At that time, one of the programs run by the hospital, which opened in 1855 as the first psychiatric hospital in the United States, provided care  for mentally handicapped refugees and immigrants—both those admitted due to acute need for psychiatric care and those adjudicated to be criminally insane. Here, I helped deal with the “extreme of behaviors” experienced by “catatonic” patients who were confined to locked wards  and monitored around-the-clock by security guards.

These patients included those who were not able to speak, move or respond, or appeared to be in a daze; and those that were overexcited or hyperactive, mimicking sounds or movements around them.  I also experienced the joy of seeing some of these patients recuperate as a result of drug therapy and psychosocial support that helped manage their symptoms and start a process of supervised re-integration into the community. This often meant being discharged to a “halfway” house--a residence for persons after release from institutionalization for mental disorders.

We need to be clear, however, and accept the reality that ill mental health is not only limited to persons with severe mental disorders confined to psychiatric hospitals. Ill mental health is a widespread but often “invisible” phenomenon. Many of us or our parents, partners, sons and daughters, have felt a sense of loss or detachment from families, friends and regular routines. We also have experienced nervousness and anxiety about changes in our personal and professional lives, as well as real or imagined fears and worries that have distracted, confused and agitated us.

While these episodes tend to be transitory for most of us, some of these conditions force us to take frequent breaks from our work, or we need time off or a leave of absence because we are stressed and depressed, or because the medication that we are taking to alleviate a disorder makes it difficult to get up early in the morning or concentrate at work.  And on occasion, because of these disorders, some fall into alcoholism and drug use, further aggravating “fear attacks” or sense of alienation from loved ones and daily routines.

And, apart from personal consequences, the social and economic costs of ill mental health are staggeringly high, measured in terms of potential labor supply losses, high rates of unemployment, disability costs, high rates of absenteeism and reduced productivity at work.

This year’s observance of the International Day of Persons with Disabilities offers a good opportunity to shine a light on some of the myths surrounding mental illness, particularly at the workplace where we tend to spend most of our waking hours. Indeed, a recent OECD report provides evidence that most people with mental disorders are in work and many more want to work.

In moving forward the disability-inclusive development agenda, including the gradual realization of universal health coverage, we need to start paying particular attention to common mental disorders of workers,  the unemployed, and their families, and not only on the provision of services for people with a severe mental disorder.  This would require, as suggested by the OECD report, dedicated effort to integrate health, employment and social services, moving away from silo-thinking and developing strong coordination and integration of policies and services.

Action is also needed to inform, train and empower actors outside the traditional mental health sphere, such as school authorities, managers, general practitioners, and in particular public employment services caseworkers, to facilitate labor market re-integration of people with mental health disorders, given the frequent unawareness and non-disclosure of mental disorders. Strengthened data collection and monitoring systems are critical to guide policy decisions and programmatic action on the basis of evidence and better understanding of the different characteristics and outcomes of ill mental health.

It is time to open our eyes to make this “invisible disability” visible! We at the World Bank Group, in partnership with other organizations, can contribute to advancing the mental health agenda globally on the basis of cross-cutting and multidisciplinary approaches that build social resilience.

In doing so, paraphrasing Judith Rodin, President of The Rockefeller Foundation, individuals, communities, organizations and systems will have the capacity to assist affected and vulnerable populations to bounce back from the shock and disruption of ill mental health and offer them opportunities to reintegrate, participate and contribute to community life.

Event:
OUT OF THE SHADOWS: Making Mental Health a Global Development Priority (April 2016)

Blogs:
Bringing Mental Health Services to Those Who Need Them Most
Blog: The zero hour” for mental health
Blog: Mental Health: Time for a Broader Agenda
Blog:  Is Violence a Public Health Problem?
Blog:  Is Unemployment Bad for Your Health?
Blog: Healthier Workplaces = Healthy Profits

Let me this opportunity to extend my thanks and appreciation to World Bank Health program for providing update on Mental illness around the world. My county Liberia is face with this challenge and we need some level of support to civil society organizations to take actions by engaging constructively to built a facilities that will take care of these individuals needs.
Thanks
Benjamin Tarnue
Program Manager
National Health Advocacy Network of Liberia/Executive Director-NACCSOL

In addition to facing the disabilities and the stigma and discrimination, persons with severe mental disorders also die earlier than others. It is estimated that the life expectancy of persons with severe mental disorders is reduced by 10 to 25 years even in high income countries with highly developed health care systems. And suicide play a relatively small part in this excess and early mortality. The main causes are chronic non-communicable diseases; they are more prevalent and are not identified and treated in time. This neglect of health for these persons is tragic and inexcusable. For more information on this, access the following link:
http://www.who.int/mental_health/management/info_sheet.pdf

This is true and I believe it is because the Psych Doctors think anything their patient complains about is all in their head, therefore the patient may not get the medical help they need..........

Mental health is an important aspect that has different considerations according to the cultural roots of different societies.
It is important to turn on the light on the problem in order to find solutions and improve the health and the situation of those persons living with mental health.
I would also suggest to try to investigate what happens in societies where there are less people experimenting mental health, and which are the characteristics of the societies where mental health is not considered as a disability that causes exclusion and silence. Sometimes, to analyze things with that positive approach can help to improve the situation in other places and also can guive useful clues for implementing preventive measures.

Thank you Patricio for bringing this issue to the forefront. I believe the points you make are central to the challenge we face going forward, and I’d like to contribute with some additional thoughts.
As you mention, mental illness is a top concern from the perspective of disabilities: it is at the top of the disability burden world-wide, with about a third of total disability according to our calculations, yet it receives a negligible portion of the development assistance for health (less than 0.5%) and of national health spending (

Many thanks, Patricio, for this thoughtful blog and for sharing your personal experience. Mental and psychosocial health are central to people and communities taking advantage of development opportunities. Every sector has an entry point from which to contribute. I'm excited to see the momentum building toward de-medicalizing mental health and mobilizing integral efforts to address mental health challenges.

It is worth noting that in developing as well as developed countries far too many people do not have access to basic mental health care. This lack of community based mental health care often results in people being placed/forced into psychiatric institutions. These institutions are typically riddled with human rights violations, the erosion of dignity, and in some instances even cruel and inhuman treatment. They serve to further marginalize people from their communities.
In large part, people with mental illness are socially excluded. They experience discrimination on the basis of their disability- in this case an “invisible disability”. The consequences are often dire; access to housing, employment and education are unavailable, denied or substandard- effectively pushing large number of persons with mental disabilities into poverty. This is for me the mental health inclusive development imperative and its relevance to the Bank’s twin goals.
Conceptually, the UN Convention on the Rights of Persons with Disabilities sets out a wide range of rights using a disability lens. It enumerates obligations governments have agreed to implement that ensure persons with disabilities; live in the community, participate and are include in regular schools, social protection programmes, health care services and employment. The Convention recognizes the diversity of persons with disabilities and provides an excellent framework from which to address mental health as a development issue.
So glad for your leadership on this important but often invisible issue.

Thanks Patricio for a very enlightening blog on an aspect of our health which disables individuals who are otherwise very talented. I think an explicit recognition of the unique talents of those whom the society considers mentally unhealthy is important, and I recommend a bollywood movie, "Taare Zameen Par" (stars on earth), in this regard. That recognition would induce positivity around the issue marked by widespread self and social stigma.
Since prevention at various stages would be the most effective strategy in this regard, primary health systems should work with schools, workplaces, etc in addition to direct action with the help of community health workers to identify and address such issues at the earliest.
Developing countries are particularly vulnerable on this issue, given weak forms of support at all levels and rising levels of aspirations and insecurities.
Fragile states are the most vulnerable. I recently visited Kashmir (India) as part of field research for a paper on challenges to job creation in fragile situations, and was told by a doctor at a primary health center that almost every patieng has to be given anti-depressants. Sri Lanka, another erstwhile fragile state in the South Asian region, has been marked by high suicide rates.