Taxes for Better Health: Making the Case at the Joint Learning Network

Adam Smith, the 18th century social philosopher and political economist, renowned as the father of modern economics, observed in his seminal work “The Wealth of Nations” that “sugar, rum, and tobacco are commodities which are nowhere necessaries of life, [but] which are ... objects of almost universal consumption, and which are therefore extremely proper subjects of taxation.”

Accumulated evidence on taxes from across the world, particularly on tobacco taxation, shows that taxing these products can offer a “win–win” for countries strengthening their health systems by increasing: positive health outcomes and domestic resources to fund priority investments and programs.  The public health impact, revenue generation, and increased equity all point to the value of a redoubled and sustained effort to support the utilization of this fiscal policy as a global public good.

To move this global agenda forward, over 35 participants from 12 low-and middle-income countries came together in Nairobi, Kenya, on February 13, 2018 to participate in a learning exchange of country experiences organized by the Joint Learning Network for Universal Health Coverage (JLN) with support from the World Bank’s Global Tobacco Control Program and co-hosted by the Ministry of Health of Kenya.  This event was the first offering of a new JLN collaborative on Fiscal Policy for Public Health. 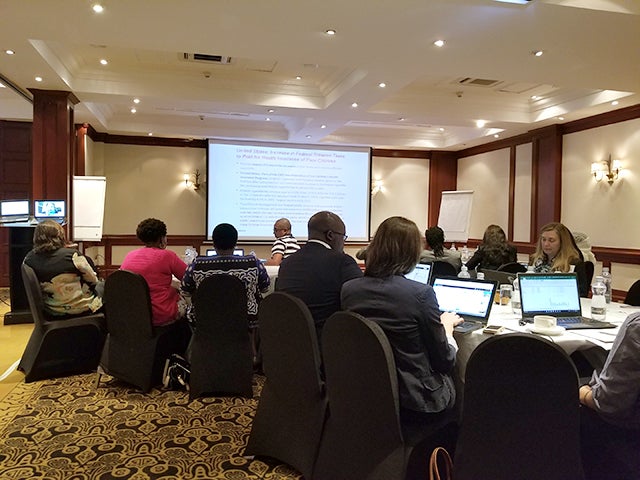 The presentations during this event showed how increasing tobacco taxes plays an important role in raising the price of tobacco products, reducing consumption, and generating new revenue for the public sector.  The evidence on the impact of taxing alcohol and sugar sweetened beverages (SSB), combined with non-fiscal measures such as regulations on advertising and sales to minors, strict enforcement of drunk-driver laws, and education and communication to consumers, is also increasingly showing the positive public health impact of this policy. However, as documented in the case of tobacco taxes, taxation policies remain underused globally, especially in low- and middle-income countries (LMICs). The good news is that there is a growing interest among policymakers and public health professionals on this topic.

The range of experiences from Ukraine, Malaysia, England, Mexico, and the United States presented at the JLN event, showed taxation to be not only an effective but a progressive policy.  The significant increases in tobacco taxes in Ukraine over the past decade have helped generate tax revenues amounting to about 1.7% of GDP in 2017 and resulted in a 20% reduction in the proportion of the population who smoke tobacco daily.  The tobacco tax in Ukraine is strongly progressive as it benefits more the poorest population deciles when direct (e.g., out of pocket health care expenditures) and indirect costs (e.g., lost days of work due to sickness) averted are considered.

In the case of Malaysia, recent studies show that to achieve further reduction in the overall prevalence of smoking among adults from 24% in 2015 to 15% in 2025, the excise tax should be raised from the current rate of 47% to 78% of the retail price. The increase in alcohol taxes in England is predicted to result in the reduction of consumption and the avoidance of new cases of alcohol-related diseases and related health care costs.  The spread of taxes on SSB to confront the alarming rise of obesity and diabetes in Mexico has led to a 10% decrease in SSB sales in Mexico, and a 21% reduction in self-reported SSB consumption in Berkeley, California, over the initial implementation phase of this measure.

Kenya offers an important lesson of real-life political economy and implementation challenges, showing that this is not an easy process and where there may be much more to learn from country exchanges.   Kenya’s experience shows that necessary elements for a successful tax campaign include collaboration with solid, technical in-country partners that can lead the effort on the ground, sustained advocacy and lobbying with key governments officials and/or stakeholders, generation of critical data to inform and support advocacy messaging, constant monitoring and countering industry interference and tactics, and proactive engagement of the public using appropriate media channels.

During an interactive brainstorming session, JLN participants focused on the public health implications of various fiscal policy measures in addition to their traditional role of raising revenue and how they had been tried in their own countries.

The big take-home messages identified by the participants included:


In moving forward, all of us should realize that fiscal policies such as taxation of products that pose major health risks for noncommunicable diseases are clearly amongst the most cost-effective measures for health systems, as countries seek to achieve universal health coverage.  If this is not done, the growing burden posed by tobacco and alcohol use and the consumption of SSB will increase the number of people affected by these diseases, raising the demand and utilization of costly medical care, and undermining the financial sustainability of entire health systems.
Topics
Health
Governance
Education