Impact evaluation evidence in developing countries is growing. In case we need evidence of that, here are two pieces: First, the cumulative number of IEs (by publication date) on improving learning from an array of systematic reviews published over the last couple of years, compiled by a colleague and I. Second, the cumulative number of IEs on reducing maternal and child mortality, from a recent systematic review (IEG 2013). The evidence is growing fast. 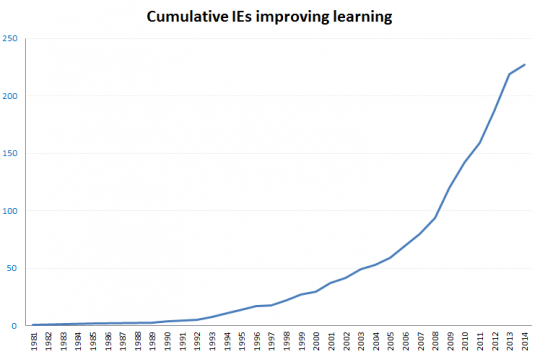 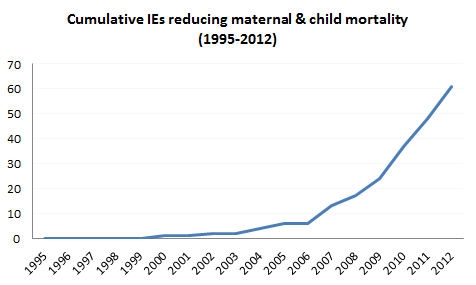 One of the principal goals of all this research is to influence policy. (As Langou & Weyrauch (2013) put it, this has been one of the goals of social science for just “the last couple of centuries.”) There are lots of instruments to affect this policy influence, but a very common instrument is the “policy note.” A policy note has figured into the dissemination plan for almost every impact evaluation proposal I have either written or reviewed. The intuition is straightforward: Policymakers don’t have time to read a full academic paper, much less a sheaf of them, so we’ll write a non-technical, brief document characterizing the main results with implications for policy.

Do they make any difference?
Having made and read all these promises to produce policy notes, I was excited to encounter an experiment to test whether these notes have an impact (published study; earlier, ungated report). Masset et al. (2013) emailed 75,000 people from development agency mailing lists to invite them to participate. About one percent responded by filling out the baseline survey. So from an external validity perspective, this is an extremely select group of individuals, potentially highly interested in the topic or with a low value of time. Still, I think the experiment provokes some interesting ideas about policy communication of impact evaluation results.

807 participants (the one percent) were emailed one of the following: (1) a policy brief, (2) a policy brief with an opinion piece from the director of a development organization (appeal to authority), (3) a policy brief with the same opinion piece, this time credited to a research fellow (pure opinion), and (4) a placebo policy brief (i.e., a brief about a totally unrelated topic and so unlikely to affect beliefs on the topic under study). They were also emailed a link to fill out a follow-up survey within seven days. Two subsequent emails (over the course of three months) invited participants to fill in additional follow-up surveys.
The five-page brief in question summarized a systematic review on “the effectiveness of agricultural interventions that aim to improve nutritional status of children.” The review had three findings, as summarized in Masset et al’s experiment:
Treatment Policy Brief 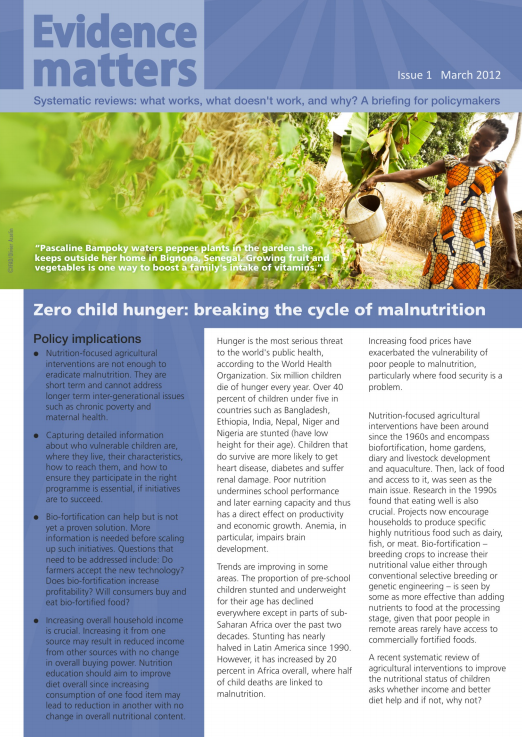 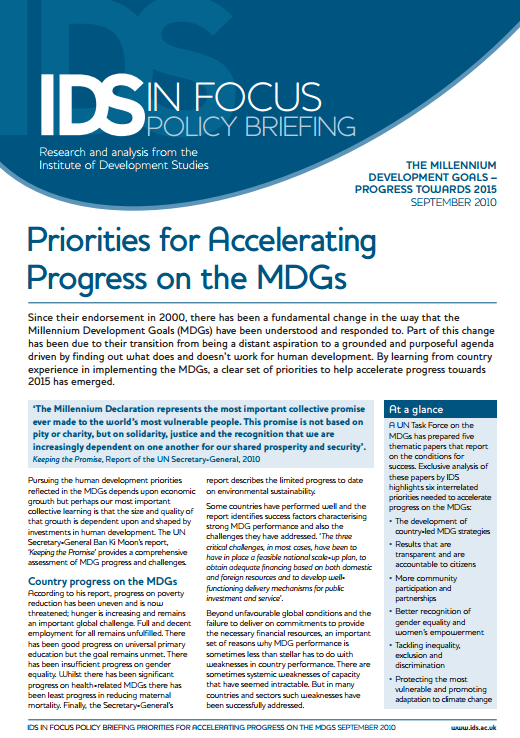 At the baseline and again at follow-up, participants were asked whether they believed certain interventions were effective at improving the nutritional status of children and also how strong they believed the evidence was for that intervention. (“I don’t know” was an option.) They were asked these questions for the four interventions included in the policy brief (e.g., biofortification and home gardens) as well as four unrelated interventions (e.g., cash transfers and deworming).

Attrition was about 50% for the first follow-up and about 70% for the final follow-up (three months later). Again, this makes interpretation of results challenging, moving them from the convincing category to the interesting category. That said, the authors show that there isn’t differential attrition across treatment groups. It looks like non-attritors are a little more likely to have opinions about the interventions covered than attritors (i.e., 49% of non-attritors versus 43% of attritors had an opinion about the strength of evidence on biofortification), as well as more likely to believe the interventions are effective (among those that have an opinion at baseline), although these differences are never significant.

Using a difference-in-differences regression analysis, the authors find that the experiment significantly increased participants’ likelihood of having any opinion at all about the strength of the evidence on the topics under review, and – for biofortification – the experiment increased the likelihood of having an opinion about the actual effectiveness of the intervention. (There was no impact on the unrelated interventions, like deworming.) There are no significant differences across the treatment groups.

In terms of how the brief actually affected beliefs (rather than just encouraging people to have them), there is only an impact for biofortification: Participants slightly downgraded their view on the strength of evidence, and – in two of three treatment groups – they revised downward their view on the actual effectiveness of biofortification. It’s unsurprising that the effect would be concentrated on this topic: Biofortification is the only intervention highlighted in the policy implications on the first page of the policy brief: “Bio-fortification can help but is not yet a proven solution.” This (limited) impact is driven by participants who had no expressed opinion on the topics before reading the brief.

So in short, the authors find that the brief helped people who didn’t have an opinion on the topic to form one, specifically one in line with the findings of the brief.

Not all policy notes are created equal
I’d love to see this kind of experiment done (with a lower attrition rate) with different kinds of briefs and other communication tools. I briefly reviewed a few policy note series: the World Bank’s From Evidence to Policy, Finance & Private Sector Development Impact, and DIME Briefs; the Poverty Action Lab’s Policy Briefcase series, the joint 3ie and the Institute for Development Studies’ Evidence Matters series; and one stand-alone note from my one work. As you can see from the examples below, all between 2 and 5 pages, there are a lot of similarities (attractive photo on half of them, lots of text on most of them). But how the information is presented is pretty diverse: A couple present the results through graphs or figures, others highlight key findings, others do neither (for the truly dedicated reader). Some policy notes have weak findings (“We reviewed the evidence and there isn’t much,” as in the subject of the experiment above); others have a “sharp” finding (such as, “Cash transfers improve nutrition” or “Cash transfers have impacts that persist after the program”).

Which design makes people more likely to read or share or understand or believe the results? We don’t really know. 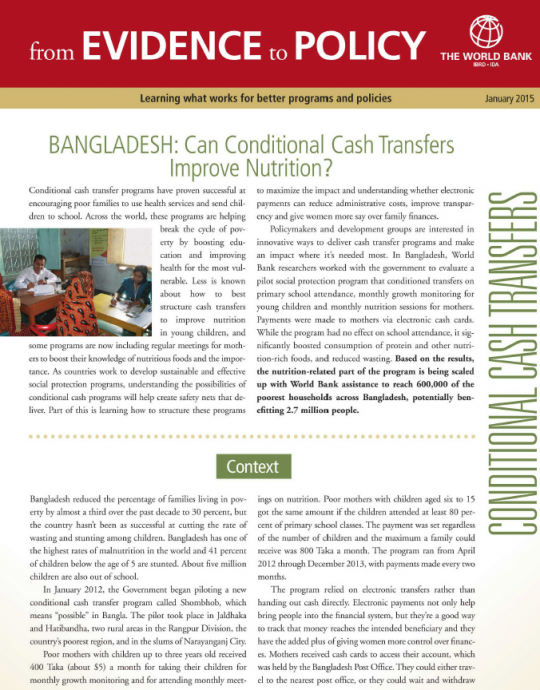 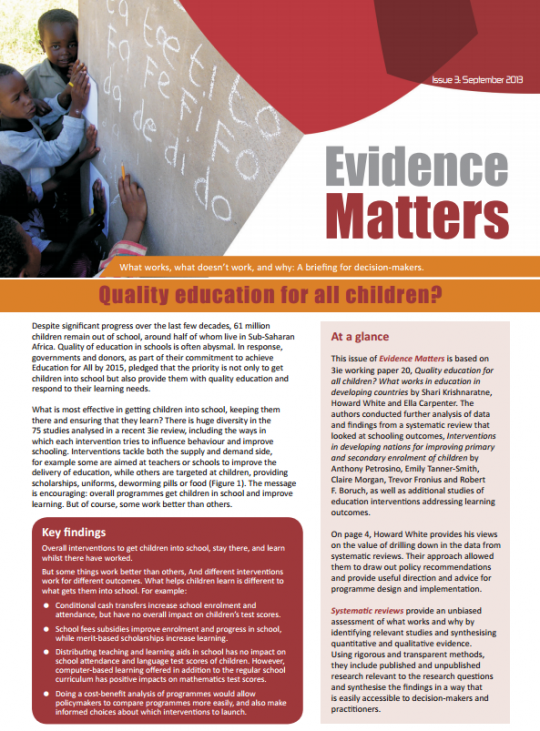 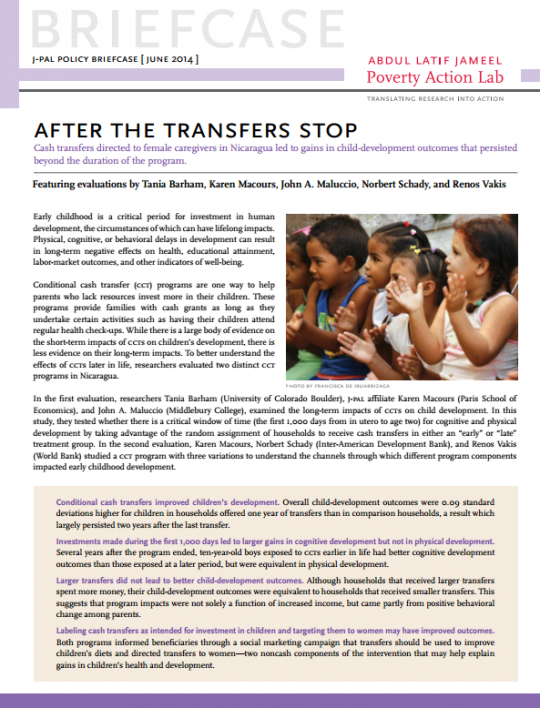 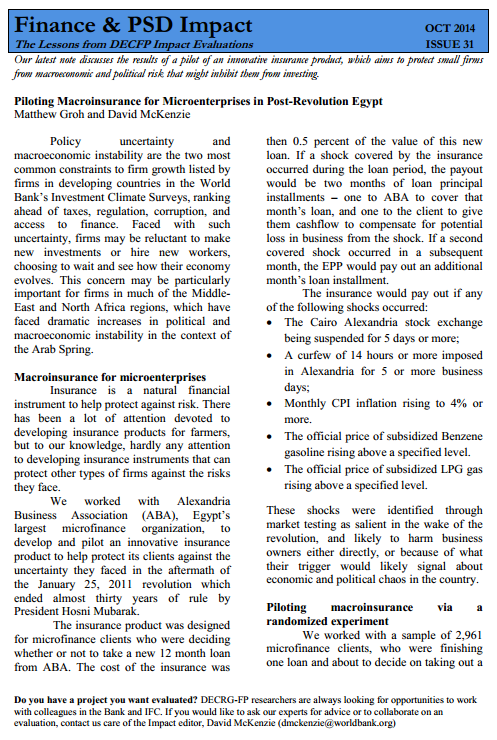 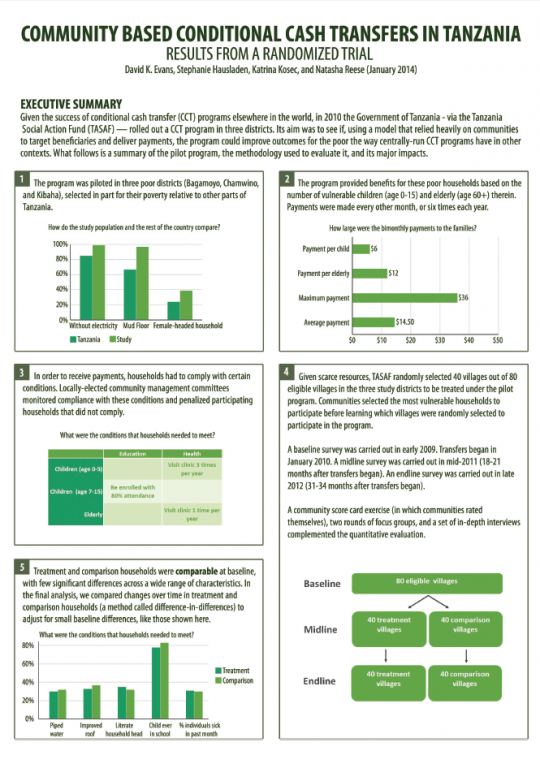 On the other hand, maybe “Which of these models works?” is the wrong question. A survey of about 500 policy stakeholders (government, non-government organization, private sector, media, etc.) conducted between 2009 and 2011 in Latin America and South Asia placed policy briefs at about the bottom of the list of information exchange useful to support policy. 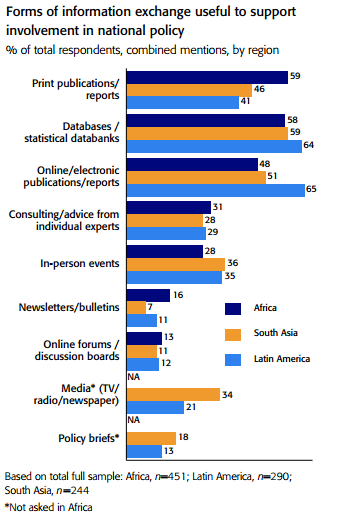 So as long as we (as a development research community) are going to keep writing these briefs about our rigorous impact evaluations, it would be valuable to provide some rigorous research on the effectiveness of the resulting products as well. And to take the policy brief with you to your next in-person event or while providing in-person advice.

I find it surprising that there is so much support of reports, especially in Africa. It seems policy makers rarely have the time to sit and read things given they spend so much time in meetings with donors and NGO's. I wonder if their feelings toward briefs are because they actually don't see them nearly as often as they do reports, since policy briefs rarely seem to make it to policy makers. You hardly hear of major national events held for the release or dissemination of a brief, but you do for reports. Similarly, reports actually require policy maker input either through surveys or interviews, so maybe they are just more familiar with them. I find policy briefs, especially from some of the organizations you mentioned, to be very silo'd, though this has been changing in recent years.

These are really nice points. Often, the policy brief comes out after the launch and so doesn't have the same natural way of making it into the hands of the policymakers as the report. (Few will fail to deliver the report to the audience; I hope.) I did have a positive anecdotal experience, where I gave the policy brief personally to several policymakers and had the chance to explain in person why I thought they would find it interesting. We were on an airplane, so they all at least pretended to read it. Unfortunately, I failed to take advantage of the moment and apply a pre- and post-test. #IEFail

Dear Dan, thanks for showcasing our policy brief experiment! Beyond looking at effects on beliefs and knowledge, the latter 2 surveys (at one week and 3 months) also explored intended and reported follow-up actions (this is the second paper we have yet to finalize).
My two main take-aways are:
Overall, our study found the policy brief had a fairly weak effect on readers’ beliefs; creating more evidence-accurate beliefs where no priors were held, but only slightly affecting those who entered the study with prior beliefs.
So, the two interpretations of that are (i) the experts in the field and those most likely to be involved in decision-making are potentially the most difficult to influence, as they have strong priors; or more positively (ii) they have a body of knowledge to which this is only one additional piece, and hence the overall change in opinion is likely to be smaller.
The study found no significant difference between the versions of the briefs in terms of effects on beliefs but it DID find a difference in effect on intended and completed follow-up actions. In particular, readers of the policy brief that included an opinion piece by a sector expert (telling the reader what they needed to take away from the study) were more likely to have told someone about the key messages and having sent the brief to someone else.
So the design matters for the sharing but not necessarily for the update in opinions.
In this particular case…

Thanks for the preview of upcoming results. The sharing aspect is a really important finding. I'll be excited to see the companion paper when it's ready!

Policy briefs are (if at all) probably only useful if read by policymakers that are actually working on the specific field that the policy brief is addressing. I wouldn’t be surprised if briefs are not effective, even if read, when the topic is totally off (e.g. a water expert reading on SMEs).

Good point, Ed. Indeed, in the experiment described above. the only ones who agreed to participate in the experiment at all were those who were involved in the field professionally or had a strong interest.
This points to the idea that policy notes, if they are going to be useful at all, may not need to try to convince a broad audience: Rather, perhaps they should be seeking to convince insiders.