This is the third paper in our series of papers by graduates on the job market this year.

We economists generally believe that infrastructure investments promote overall economic growth. However, these investments are not distributed evenly, such that regions or sectors more “local” to the investment will benefit more than the non-targeted regions or sectors. The distributional consequences will be even more pronounced if investments biased toward one sector or region hurt the non-targeted sectors or regions. In my job market paper, I ask a specific question: to what extent would investments biased toward the urban sector hurt the non-targeted rural sector? I try to answer this question using the high-speed rail upgrade in China as a case study. Specifically, I focus on the outcomes of the non-targeted counties who were quasi-randomly affected by this railway upgrade due to their location in between the largest cities, and compare them with the non-affected counties locating on other railway lines, before and after the upgrades. These two groups of counties had a similar growth trend before the upgrade. However, the affected counties suffered a 4-6 percent reduction in GDP and GDP per capita following the upgrade, which was not driven by population changes, but by the reduction in investments. I also find that the GDP reduction is significant in the service sector and not in the manufacturing sector. As the first paper studying the distributional impact of high-speed rail, my research is tightly related to previous literatures detecting the causal relationship between access to railroad and various aspects of economic development in both developing and developed countries (Ahlfeldt, 2011; Atack et al. 2010; Banerjee et al. 2012; Donaldson 2013; Donaldson and Hornbeck 2013; Zheng and Kahn, 2013). In addition, it is especially related to the papers estimating the distributional impact of public infrastructure (Duflo and Pande 2007; Baum-Snow 2007; Baum-Snow et al. 2012; Faber 2013).

Policy Background: High-Speed Rail Upgrade in China
In 2004 and 2007, China upgraded a total of 6000 km of existing railway lines into high-speed rail, in order to connect several of the largest cities more tightly, such as Beijing, Shanghai, Guangzhou and Hong Kong. Even though the railway lines in counties in between these large cities were also upgraded, high-speed trains stopped only in cities. In addition to that, because the bullet trains share the same railroad with the conventional slow trains, some slow train services in the counties were cancelled. Therefore, even though the high-speed trains help facilitate economic activities across cities, they may actually hurt the rural counties along the accelerated railway lines by passing them by and depriving them of access. 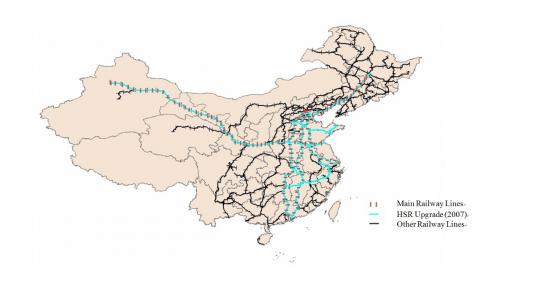 A Difference-in-Difference (DID) Approach
I use a difference-in-difference specification to compare outcomes in the affected counties and non-affected counties before and after the upgrade. I control for county fixed effects, year by province growth trend, and cluster the standard errors at the county level. The outcome variables I care about are GDP, GDP per capita and fixed asset investment. I collect these variables from the provincial statistical yearbooks from 2002-2009. The railway data is collected from the railroad atlas, passenger train schedules and China Railroad Yearbooks. The key assumption of DID analysis is the common trend. So I use an event study to validate that the control and treatment groups had similar growth trends before the railway upgrade. Non-random placement of high-speed rail might be another problem which may bias the DID estimation. However, given that the event study suggests that the growth trend was similar in the two groups, this should not be a serious concern. But I also use an IV to instrument for the high-speed rail placement. The instrument is whether a county is located on the five main railway lines or not, interacted with a series of year dummies. Being located on the main railway lines is associated with a higher likelihood of being upgraded into high speed rail, which satisfies the correlation assumption. The exclusion restriction assumes that the placement of counties on main railway lines affects their economic growth only through its impact on the railway upgrade. Even if counties in the main railway lines were believed to have better economic potential, this will only bias my estimate downward as I expect the affected counties performed worse after the railway upgrade.

High-Speed Rail Upgrade Leads to Economic Slowdown in Counties
As mentioned earlier, I find that counties being affected by high-speed rail upgrade experienced 4-6 percent GDP and GDP per capita reduction, which can explain around 64 percent of the predicted GDP growth differentials between the control and treatment counties. The reduction in GDP per capita is not driven by population changes. Instead, I find that the magnitude of the reduction in fixed asset investment almost explains the reduction in GDP. Intuitively, when the cities had been connected by the bullet trains, investment left the counties and crowded into the cities in pursuit of higher returns. Additionally, I find that the negative impact of the upgrade is significant in the service sector and not in the manufacturing sector. This is reasonable since high-speed rail upgrade affects the transportation of passengers and not transportation of goods.
Why is there a negative impact of high-speed rail on those affected counties? There are at least two possible mechanisms. First, it is possible that counties got more isolated after the high-speed rail upgrade, which resulted in an increase in transportation cost and a decrease in economic activities. Second, it is also possible that cities got more connected after the upgrade, resulted in an increase of agglomeration spillovers and a diversion of economic activities from counties to cities. In my paper, I provide some suggestive evidence that the second mechanism seems to be more convincing.

Policy Implications
If high-speed rail hurts the economy, countries will not invest in it. Therefore the cities served by the bullet trains should have benefited from the high-speed rail network. Let me carry out a simple calculation for the benefit and loss of this project. I use a similar DID specification to investigate the impact of high-speed rail on the affected cities. I would say it is not an unbiased estimation since cities are definitely selected into the railway upgrade for certain reasons. So it’s just suggestive evidence. I find that being affected by the high-speed rail upgrade is not associated with higher economic growth in cities. But it seems that the affected cities tend to have higher levels of GDP after the railway upgrade. The estimated benefit is around 17-22 billion yuan in 2007. Therefore I compare the GDP loss in counties with this estimated benefit in cities. I use the average GDP in the affected counties one year before the high-speed rail, multiplied by the magnitude of the impact (5 percent GDP reduction) and the total number of affected counties (183), to reach a total GDP loss around 77 billion yuan. Since 80 cities were connected to high-speed rail, the benefit outweighs the loss if the benefit in cities is more than around 1 billion. By comparing this threshold with the estimated benefit of 17-22 billion in each city, it is very likely that the benefit is much more than the loss. Even though the high-speed rail investment seems to have overall good economic returns, policy makers should still be aware of such distributional impact to avoid the exacerbation of within region inequality. In addition to high-speed rail, policy makers may also want to be careful about other types of infrastructure, such as highways, which may generate similar distributional impacts (Faber, 2013).
Yu Qin is a PhD student at Cornell University.
Topics
Transport
Infrastructure & Public-Private Partnerships
Jobs & Development
China
East Asia and Pacific