No participation without taxation? Evidence from randomized tax collection in the D.R. Congo: Guest post by Jonathan Weigel

This is the first in this year’s series of posts by PhD students on the job market. Reminder that submissions close this Wednesday at noon.

Good political institutions are thought to be essential for sustained economic development (Acemoglu et al., 2016). But where do inclusive, accountable institutions come from? One prominent explanation centers on taxation (Schumpeter, 1918; Besley and Persson, 2009, 2013). Historically, when states began systematically taxing their populations to pay for wars, citizens protested fiercely, demanding public goods and political rights: “no taxation without representation.” This process triggered the co-evolution of tax compliance, citizen participation in politics, and accountable governance. Today, policymakers often promote taxation in developing countries to jumpstart this same virtuous cycle. “Bringing small businesses into the tax net,” writes the IMF, “can help secure their participation in the political process and improve government accountability” (IMF, 2011).

My job-market paper tests a hypothesis at the core of this narrative: that tax collection will cause citizens to participate more in politics. Despite the prevalence of this assumption, it is not obvious that citizens will choose to engage more with a state that is seeking to tax them. Political action is individually costly but publicly beneficial; many citizens might prefer to free ride on the efforts of others. Some might run for the hills (Scott, 2009). Testing this hypothesis is difficult because most states are far from random in whom they tax, targeting certain groups — such as individuals with greater liquidity or less mobile assets — who may participate more for other reasons. The only experimental studies on the topic are from the lab, and the evidence is mixed (Paler, 2013; Martin, 2014; de la Cuesta et al., 2015).

To study the effects of tax collection on citizen engagement with the state, I partnered with the Provincial Government of Kasaï Central and randomly assigned the first-ever property tax campaign to neighborhoods of Kananga, in the Democratic Republic of Congo (DRC). In treatment neighborhoods, tax collectors went door to door collecting the property tax (Figure 1), which is roughly $2 per household and equivalent to median daily income. Control neighborhoods kept the old declarative system, in which citizens were supposed to pay at the bank themselves, but in practice, less than 1% did. Of 431 neighborhoods in Kananga — covering over 100,000 households — I randomly assigned 253 to treatment.

Before comparing political participation across treatment and control, I examine whether the campaign achieved its stated goals of raising tax compliance and increasing the presence of the formal state in Kananga, and thus whether it constitutes a valid test of the “tax-participation hypothesis.” One might expect a tax campaign to fail in the DRC, where extractive colonial practices, economic decline — the country has lower per capita GDP today than in 1960 — and civil war have weakened state capacity and spread corruption. Indeed, citizen payment of formal taxes was near zero at baseline: less than 6% of the population even knew of the property tax, for example. Will citizens comply when collectors ask them to pay taxes? Will collectors submit taxpayer money to the state?

Despite the difficult circumstances, the 2016 campaign raised citizen payment of the property tax by 11 percentage points, up from 0.6% in control neighborhoods (see Figure 2). Total property tax receipts in 2016 were $57,294, about 4% of total provincial receipts, most of which come from trade and rental taxes levied on a handful of firms, such as mining and mobile phone companies. Given that the campaign met the government’s objectives, I use its random assignment to examine whether tax collection augments citizens’ efforts to demand public services and accountability from the government. 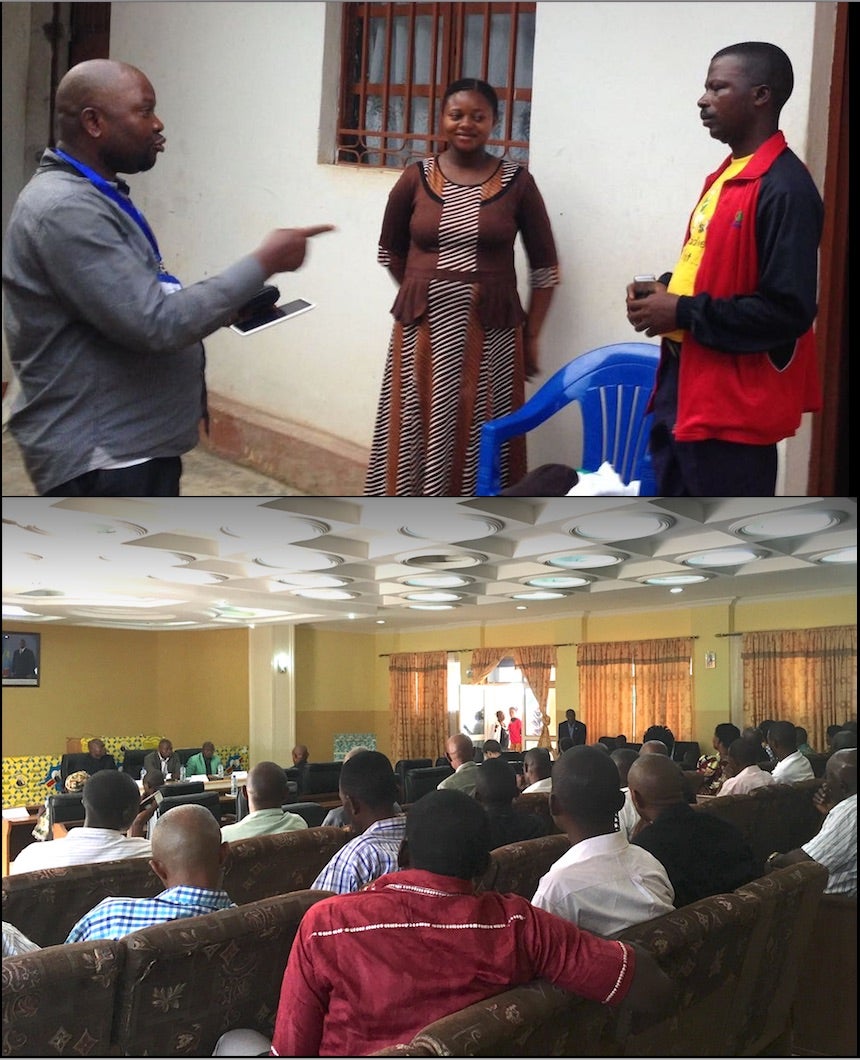 Survey-based measures of political engagement are often unreliable (Mullainathan and Bertrand, 2001; Silver et al., 1986), and elections in Congo have been postponed indefinitely. So I worked with the provincial government to create two real-world channels of citizen participation. First, the government hosted a series of townhall meetings, in which officials dialogued with citizens about taxation and public spending in Kananga (Figure 1). Second, we set up a suggestion box in the city center in which citizens could submit anonymous evaluations of the provincial government that would be shared with the governor and other top officials. Attending a townhall or submitting a suggestion card exhibits willingness to exert costly effort to have a voice in the government.

Tax collection increased participation on both dimensions: residents of treated neighborhoods were nearly 5 percentage points more likely to attend a townhall meeting or to submit a suggestion card (see Figure 2). In percent terms, this is a substantial increase — up 28% from control neighborhoods. During townhall meetings and on suggestion cards, participants demanded better public infrastructure as well as greater transparency and government accountability. “Ravines threaten our neighborhoods, and the government does nothing,” asked one individual, “so why should we pay?” 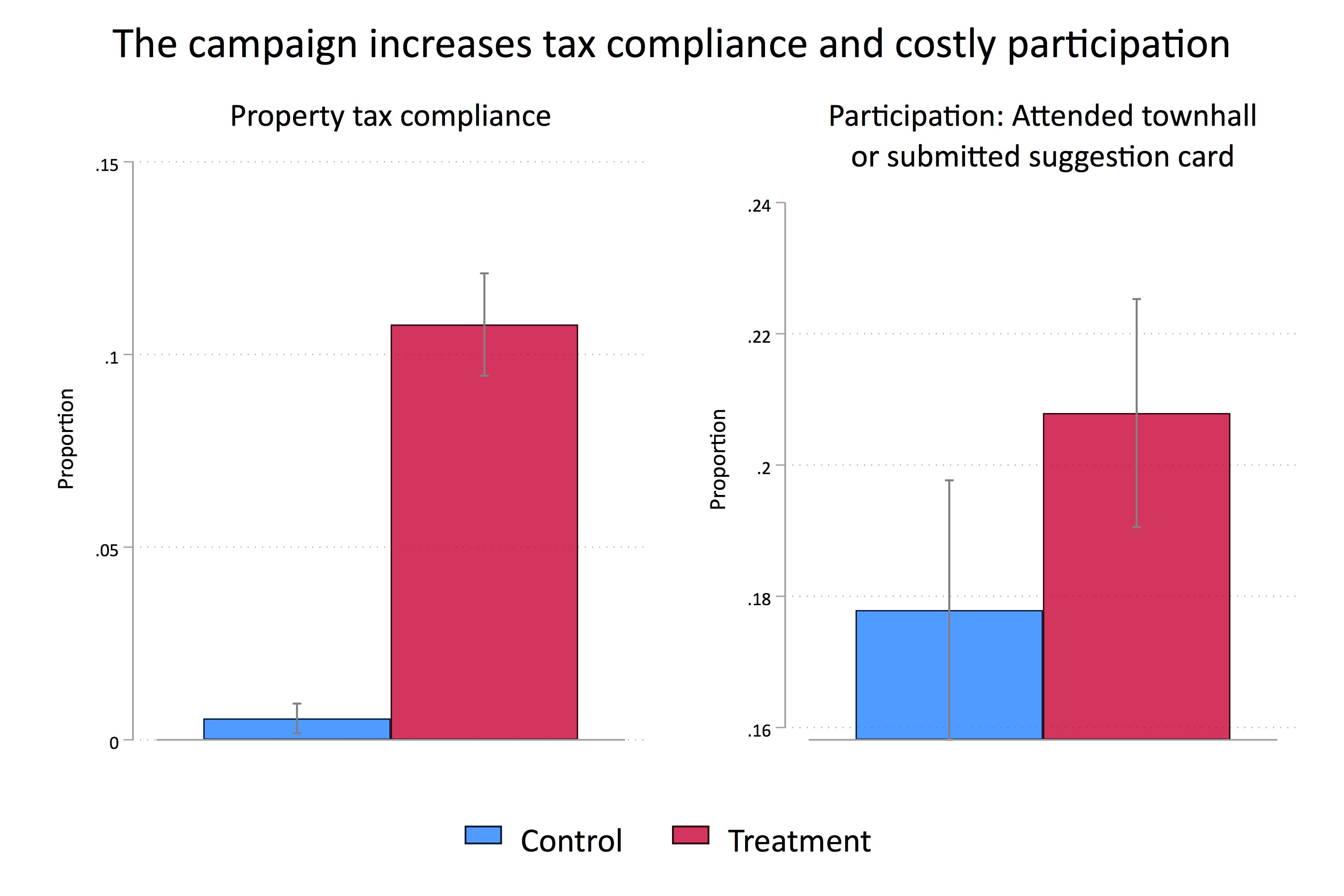 Tax collection as a signal of state capacity
The paper provides the first field-experimental evidence that tax collection triggers engagement with the state. But perhaps more surprising is the mechanism behind this effect. The literature typically assumes a payment channel: taxpayers feel a sense of ownership over public revenues and therefore demand a voice in matters of government spending (Prichard, 2015). However, in Kananga, the increase in participation is not driven by taxpayers alone: in treatment neighborhoods, both payers and those who evade payment participate more compared to people in control neighborhoods.

In light of this finding, I argue that a signaling mechanism is at work. In a low-capacity setting, the fact that the state was able to administer a citywide door-to-door tax collection campaign sends a potent signal about its ability to intervene meaningfully in society. I present a simple model in which this signal leads citizens to expect greater returns from participation. Realizing the state has higher capacity than they previously thought, citizens exert more effort to have a voice in determining future public policy — whom the government taxes and what services it provides.

To test this signaling model, I examine the effects of the tax campaign on individuals’ stated beliefs about the government’s capacity. Respondents in treated neighborhoods believe the provincial government has greater informational capacity: how much it knows about citizens’ properties, earnings, and past tax compliance. They also believe the government has greater spending capacity: new public revenues generated by the campaign. These are logical inferences for citizens to have drawn after observing tax collectors going door to door in their local neighborhoods. Thinking the government has higher revenues after the campaign, citizens sought a voice in determining how the new funds are spent. In the words of one participant, “The provincial government should do more and inform us how this money will be spent on public infrastructure and not wasted on other things.”

This signaling mechanism is relevant not only in the DRC, but in all states seeking to build rudimentary tax capacity. Property tax collection in particular is a priority of many African states, including Sierra Leone, Liberia, and Malawi. Governments should be aware that tax collection efforts have an informational component that can magnify citizens’ response. Even if a government only manages to raise tax compliance marginally, its efforts to do so may trigger a disproportionately large reaction as all citizens who receive the signal sent by the tax campaign — payers and nonpayers alike — demand more from the state.

Jonathan Weigel is a PhD candidate at Harvard University.