The Role of the Financial Sector in Improving Households’ Health: Guest Post by Kim Fe Cramer

There are strong theoretical reasons to believe that the financial sector can play a vital role in improving health. Imagine a village or small city, in a developing country such as India, experiencing the opening of a bank branch (figure 1). First, the bank provides credit to local businesses. This stimulates business activity and households benefit from higher income; they can now invest more in health. Second, the bank provides access to financial instruments for households. Importantly, I show that in many developing countries, this not only includes savings accounts and bank loans, but also health insurance. Banks act as intermediaries between households and health insurance providers in far-away cities, offering health insurance at local branches. Third, the bank provides credit for health care providers, allowing them to improve health care supply. Despite these potential mechanisms, we lack causal empirical evidence on the relationship between bank presence and health.

Figure 1: Potential mechanisms through which banks can improve health outcomes 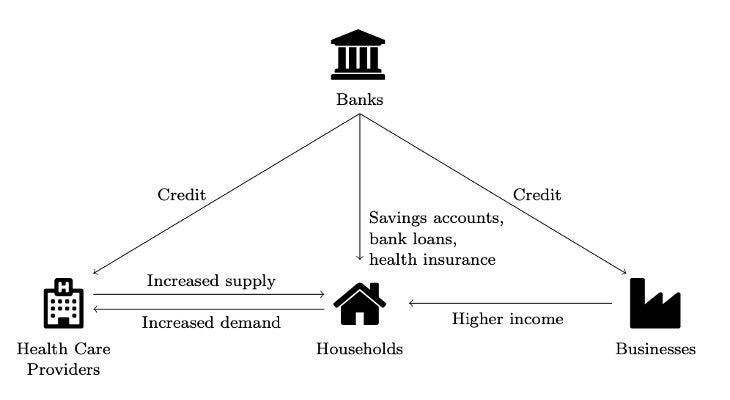 In my job market paper, I use a nationwide natural experiment in India to study the relationship between bank presence and health. I use a Reserve Bank of India (RBI) policy, initiated in 2005, that incentivizes banks to set up new branches in underbanked districts. A district is defined as underbanked if it has a population-to-branch ratio that exceeds the national average, leading 375 of India’s 593 districts to be classified as underbanked. The definition of an underbanked district allows for a regression discontinuity design; the district-level ratio is the forcing variable, and the national average is the cutoff. Within a state, I compare districts with a ratio just above the national average (treated) to those just below (control). How many districts are included in this comparison depends on the optimal bandwidth, which is calculated for each outcome separately. In most specifications, I include districts with a ratio in a range of plus to minus 3,000 of the national average (14,780). This corresponds to 111 districts just above the cutoff and 88 districts just below the cutoff.

The main identification assumption is that within the same state, districts just above and below the cutoff are comparable to each other in all relevant aspects except their treatment status. The assumption is violated if local governments manipulate their ratio, but that is unlikely due to its construction. In the numerator of the ratio, the total population is historical data from the 2001 Population Census. In the denominator, the total number of branches is the sum of individual decisions of all banks in a district. I also find no empirical evidence of manipulation. Notably, treatment and control districts have smoothness in bank presence, household health, as well as variables related to potential mechanisms before the policy (figure 2). 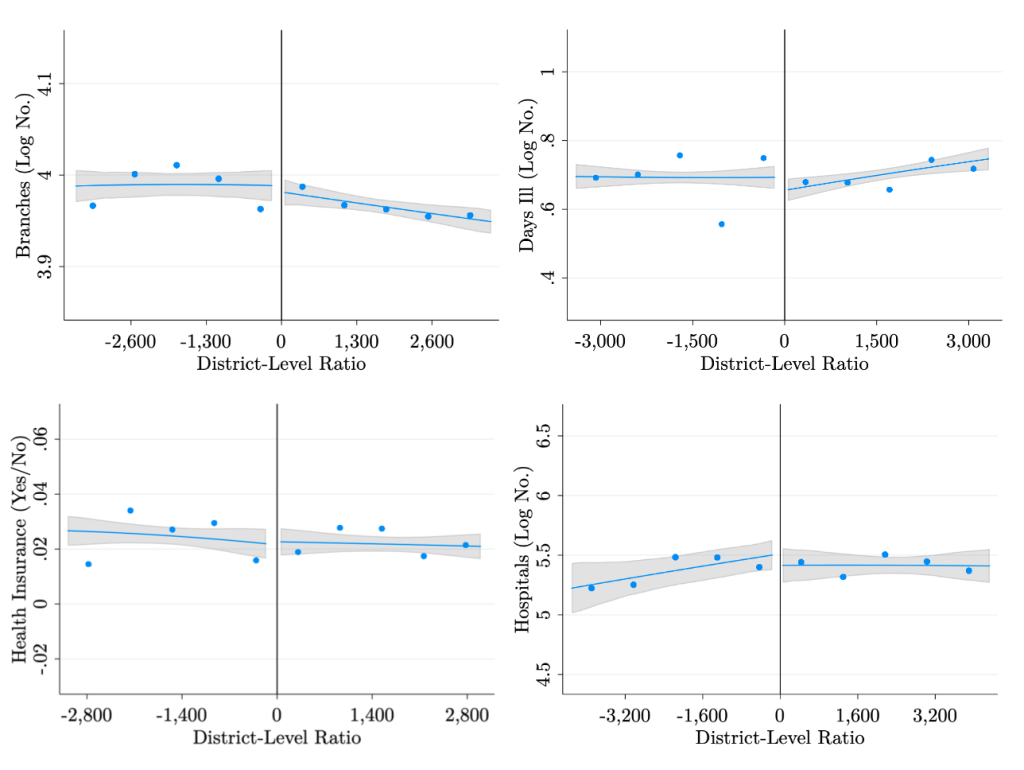 To understand the effect of these extra branches on health, I use two surveys for household-level regressions, the Indian Human Development Survey (IHDS, 2011/2012) and the Demographics and Health Survey (DHS, 2015/2016). I examine impact on three important dimensions of health: morbidity rates, vaccination rates, and pregnancy risks. Using the IHDS for data on morbidity rates, I find that six years after the policy was introduced, households in treatment districts are 19 percentage points less likely to be affected by a non-chronic illness, such as fever, during a month than those in control districts (a 36 percent reduction). Correspondingly, households report being ill fewer days (figure 4). The effect size is in alignment with other successful health interventions. For instance, ten years of bank exposure results in around 70 percent of the effect size as two years of exposure to Progresa, a conditional cash transfer program in Mexico (Gertler, 2004). In line with decreased morbidity rates, I find that health-related economic outcomes improve. Households miss half a day less of work or school due to an illness and spend significantly less on medical expenses. Using the DHS, I replicate my findings on morbidity rates and examine health along other dimensions. Ten years after the policy, children in treatment districts are significantly more likely to be vaccinated than those in control districts. Additionally, pregnancies become safer: with an increased probability of delivering in a health care facility in treatment districts, the probability of miscarriage or stillbirth decreases. 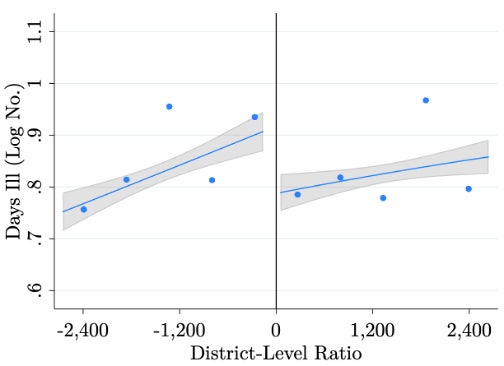 How exactly does bank presence affect the health of households? The short narrative above suggests potential mechanisms. I find evidence of all almost all these mechanisms except banks providing loans to households. To further narrow down which mechanisms drive the relationship, I benchmark my findings to randomized control trials. Note that we must take this exercise with a grain of salt, because those studies are often conducted with a small sample over a short timeframe. However, they find that savings accounts and income alone are no silver bullets for improving health (Dupas et al., 2018; Egger et al., 2019; Haushofer and Shapiro, 2013; Haushofer and Shapiro, 2018). This suggests that health insurance for households and credit access for health care providers might have played a larger role. Households in treatment districts are 17 percentage points more likely to hold health insurance six years after the policy (compared to a control mean of 6 percent). Eight years after the policy, the share of hospitals mainly financed by an institutional loan is 68 percent higher in treatment versus control districts, and the total number of hospitals is 140 percent higher. Finally, it could be that it was crucial to simultaneously simulate demand and supply of health care to move the needle on health status.

Kim Fe Cramer is a PhD Candidate in Finance and Economics from Columbia Business School. Her research investigates what role the financial sector can play in improving households’ wellbeing. Apart from her job market paper, she also investigates, using a series of randomized controlled trials in Kenya, whether health insurance should be subsidized.